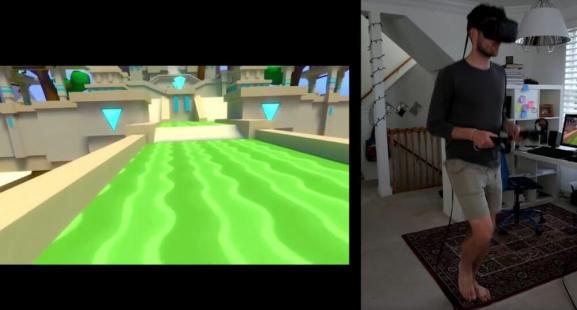 Locomotion in virtual reality experiences and games is something that hasn’t been figured out entirely just yet. With headset tracking and sensors, players can move around defined spaces that reflect the rooms they inhabit to a degree, but you’re limited by the size of your physical space. And while there are options like teleporting to expand that area, that breaks immersion and depends on the use of controllers for movement. Omni-directional treadmills like the Virtuix Omni are the most immersive of the bunch from a physical perspective, but they’re bulky and not very practical for the average consumer.

None of these truly display a reliable option in a small form factor that can trick our minds as we move around the larger landscapes some VR games offer. However, the small team at Cool Font has a new app that may open a new door for movement in virtual reality.

PocketStrafe is a mobile app for IOS and Android that connects to a PC (currently compatible with both Oculus Rift and HTC Vive headsets) through Wi-Fi. With it, you calibrate to your specific measurements, put your device into your pocket, and run in place to move throughout various compatible VR games.

The movement itself can be paired to different forms of input from a keyboard to an attached controller. Immediately this type of movement is beneficial in a couple ways: 1) Running in place carefully will keep headset wearers from walking into furniture and people while playing and 2) this can be a pretty decent cardio workout. Physically, it’s similar to other ‘running in place’ movement systems we’ve seen, but it frees up both hands and lets you use both controllers still, making it unique.

VR has the uncanny ability to trick our eyes, mind, and inner ear into sensations of movement or vertigo. Because of that, moving quickly or changing directions suddenly without physically having to move in such a manner creates bouts of motion sickness. Exhibiting some physical form of locomotion like in PocketStrafe can hopefully alleviate some of those issues for those impacted.

PocketStrafe is available on IOS and Android for the current sale price of $1.