Akonia Holographics, a startup in Longmont, Colorado, spent years trying to make holographic data storage work. It didn’t succeed, but now it found a new use for the same technology. The company now plans to use holography to make inexpensive transparent displays for augmented reality smartglasses.

Augmented reality is expected to be a $90 billion market by 2020, according to tech advisor Digi-Capital. And while big companies such as Microsoft, maker of the HoloLens AR smartglasses, could be rivals, Akonia hopes instead to be a component supplier, providing the designs and initial prototypes for holographic displays in AR smartglasses, said Ken Anderson, CEO of Akonia, in an interview with VentureBeat.

The team started working on holographic data storage in the 1990s at Bell Labs, then spun out of Bell Labs in 2000 as InPhase Technologies. But that company eventually went bankrupt, and Akonia was founded in August 2012 after acquiring millions of dollars in assets and the entire 200-patent portfolio from InPhase. The goal was to produce a storage product.

But during the past year, the company decided to shift markets and repurpose its displays for AR, using what it calls its HoloMirror technology, which the company says is the perfect solution for the transparent eyepiece that combines the view of the outside world with a computer display.

The company is making volume holographic reflective and waveguide optics for transparent display elements in smartglasses. That tech produces quality imagery, transparency, and low costs. Chris Berliner, director of business development, said that the company can provide ultra-clear, full-color displays and a wide field of view. The company is initially targeting a 60-degree field of view. 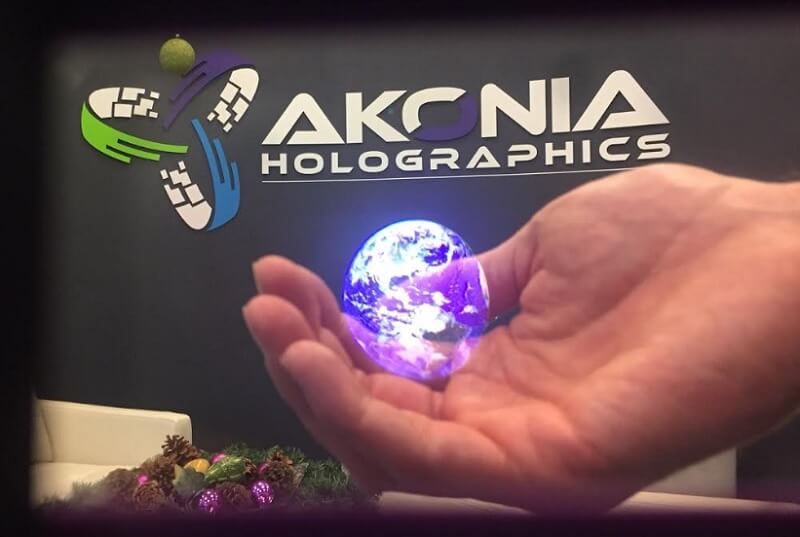 Above: A view of Akonia’s holographic capabilities.

“We believe we can solve the problem of the eyeglass that sits in front of your eyeball,” Anderson said. “You can overlay something like a green arrow for navigation or a Pikachu for a game.”

Akonia hopes to raise money in the coming months to get a pilot line going to manufacture the displays. But over time, it hopes to find a big partner that can handle the manufacturing. Akonia is working with customers now who are paying engineering fees to develop prototypes. It isn’t too complex, as it is essentially one piece of plastic in between two pieces of glass.

“Our proprietary holographic photopolymers have been developed and refined for over 2 decades, and along with our ability to design and develop complex holographic recording systems we have a unique insight into how to use holography to create the most elusive and difficult component of an AR headset: a thin, transparent eyepiece that provides good display performance at a reasonable cost,” Anderson said.

Akonia hopes to get production going by 2018 or so. The company has 20 employees now. It previously raised money for its data storage plans, but it is using that money for the display technology now.

“Our end goal is to license the technology,” Anderson said.

The company has poured about $100 million into its holographic technology over the past two decades. The company has 165 patents, including a few dozen related to augmented reality.

“It’s been hard work,” Anderson said. “Optics doesn’t really obey Moore’s Law (the prediction that the number of components on a chip doubles every couple of years). “We think we have cracked the code on this component. We’ve used lenses for hundreds of years, and we hope holography will give us a new way to manipulate light.”

Of course, there is a difference between displaying a 3D holographic image (like Princess Leia in Star Wars) and using holograms to manipulate light like what is done in Akonia’s eyepieces. Akonia is not unique in its attempt to use holography in this manner. Many companies from around the world have been working on holographic eyepieces for decades. Why? Because holography has one huge benefit: It can manipulate light while being perfectly invisible, which is exactly what is needed in an eyepiece.

To create this eyepiece, multiple approaches have been taken by companies like Lumus (louvered mirrors), Microsoft (surface gratings), ODG (tilted surfaces), Sony (thin holograms), and others. But Anderson believes no one has developed an eyepiece that checks all the performance boxes.

Akonia is taking an entirely new holographic approach that utilizes its high-performance photopolymers, along with expertise in combining a multitude of holograms in a single layer of polymer to better control the quality and size of the images that are being redirected towards the eye.

“Using more holograms in the eyepiece gives it more control of the image, and therefore one has more knobs by which to optimize the eyepiece’s performance,” said Anderson. “The trick is getting all of the holograms to work together constructively over a large field of view and color spectrum simultaneously. This is what nobody else in the world can do, but we can.”

He believes Akonia’s HoloMirror technology will finally enable AR headsets to be thin, transparent, vibrant, full-color, and have a wide field of view at a fraction of the cost of competitors.

After a year and a half of development, Akonia is now demonstrating full-color eyepieces that have never before been possible with holography.The goal is to show a full-color, wide-field-of-view eyepiece by summer.