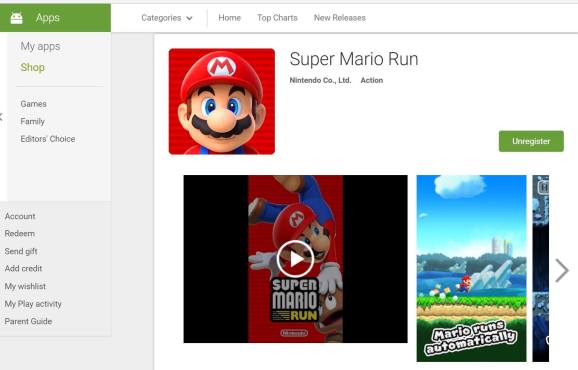 Don’t worry, Android owners. Soon, you too can get angry about paying $10 for a new Mario game on your device.

Super Mario Run is up for pre-registration on the Google Play Store. To ensure that that you get a notification when Nintendo launches the mobile platformer (read our review), you can sign up for alerts on the game’s market page. Once Super Mario Run launches on Android, you can grab it immediately as a free download, but then you will need to pay $10 to unlock the rest of its content after the third stage. Nintendo has already seen huge success with Super Mario Run on iOS. The publisher confirmed that iPhone and iPad owners downloaded it more than 50 million times in a matter of days, which makes it the fastest downloaded app ever in the $36.6 billion mobile gaming industry.

It’s possible that Nintendo will see even more downloads in a similar period of time on Android considering the market-share lead Google’s mobile operating system has over iOS. But, at the same time, Android may have a lower conversion rate of players who decide to spend money. Apple’s iOS traditionally generates more spending on games than Android. That’s because iPhone owners tend to have more wealth, and it is slightly easier to pirate games on an Android device.

That latter point about piracy is one of the reasons that Nintendo likely went with Apple first to debut Super Mario Run. It got a big marketing push from the Cupertino-based company, and it didn’t have to worry about widespread piracy. But Android is still too lucrative for Nintendo to bypass altogether, so keep an eye out for the game to drop on your Google Pixel, Samsung Galaxy S7 Edge, or LG G5 soon.