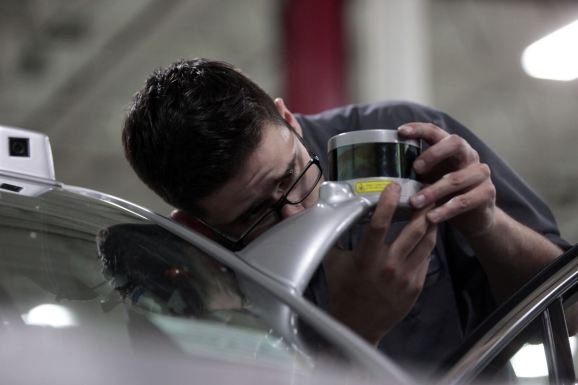 Ford is making sure their self-driving tech actually works.

Tesla deserves the credit for leading the automotive industry forward with a self-driving car that’s available now and lets you drive (mostly) hands-free and feet-free. Yet there’s another company that plans to make a statement at CES 2017 next week.

Ford first announced a self-driving car program quite a few years ago, but at CES, they will unveil the Ford Fusion Hybrid as a development platform. The car has LIDAR sensors installed in a way that doesn’t look obnoxious but still can scan in a 360-degree pattern in front of the car. (They’re in the front pillars.) In a detailed blog post, Chris Brewer, the chief program engineer for Ford Autonomous Vehicle Development, explained that the high-res sensors can determine where an object exists on the driving path, the size and movement of the object, and the shape.

There are also two cameras on the roof that scan for objects and can tell when the traffic lights turn from red to green. Additional radars let the car “see” in fog, rain, and snow.

One interesting note from the blog post has to do with power consumption. All of the radars and sensors, as well as the hardware that runs the brain of the autonomous vehicle, use extra power, so the Fusion had to be built as a hybrid with extra battery power.

Reading the post, you get a sense that Ford wants to handle the self-driving car tech the right way, not in a half-baked manner or rushed to production. You could say the Tesla Model S is a prototype for future cars, but that’s both a good thing and a ding against a fairly small company. Tesla sells a few thousand cars a year; Ford sells millions of them. Ford has to figure out not just how to make a self-driving car, but also how to design it for mass production, for any driver. It’s the difference between having a startup mentality — prioritizing being first to market and taking risks — and being an established brand. The challenge is not to make a one-off vehicle that’s a showroom trick, but to engineer every make and model in an entire fleet to drive autonomously.

That was one obvious challenge I heard about when I visited a race track with a team from Stanford building autonomous tech a few years ago, in partnership with Audi. They kept telling me about all of the things that can go wrong on the road. Cars that behave erratically, snow and rain that suddenly swell up from a farm field in the country.

While it seems like Ford is behind some of the other car companies, it appears to be a deliberate plan. Brewer’s blog post mentioned how a computer in the trunk generates 1 terabyte of data an hour  during tests. Ford has to make sure they are building a platform that not only is safe to deploy in the Fusion and in other cars eventually, but that feels safe to consumers.

One last interesting note about what Ford is doing: The company has specifically mentioned ride-sharing and ride-hailing, which means the self-driving Fusion will act more like an Uber. They’ve set a timeframe, too — committing to the year 2021 as the debut year. That’s not exactly aggressive, and I’m guessing the Chrysler Pacifica that drives autonomously will debut before then (with help from Waymo, the Google spin-off). I’m not sure if aggressive is what we really need right now, anyway. Ford is taking a measured, logical approach — targeting a specific market, ride-sharing — and making sure the platform works in the long run.

Here’s hoping all of those pieces fall into place.