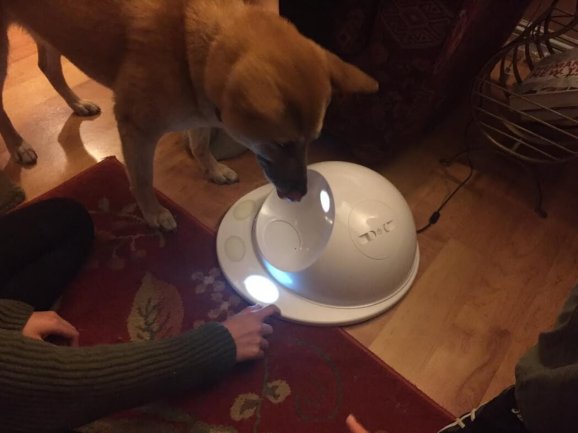 I’m about to head off to CES 2017, the big tech trade show in Las Vegas next week. But before I did, I thought I would try out one of the funny products from CES 2016. The Clever Pet billed itself as a video game console for dogs and cats.

The CleverPet Hub debuted for $300 this year as an automated pet feeder and trainer. Your pet — dogs or maybe really smart cats — can do some real work to get their treats or meals. They do so by pawing the lights on the Hub. It’s akin to the old Simon board game.

I tried it out on my dog, Kona. She’s an old dog, at nine years old, so maybe it was a little ambitious of my family to try to teach her some new tricks. She certainly grasped quickly that this machine could give her some kibble.

But she didn’t really catch on that she had to paw the lit button in order to get some food. We tried to train her to get used to it. At first, you’re not supposed to hang around the pet while it discovers the Hub. But we couldn’t help it and gathered around her. It was a nice little holiday activity for the family.

After a while, she caught on that she had to hit a button to get some food. But she never really caught on to the light thing. She hit the lit buttons a couple of times, but we think it was by accident.

The idea is to get pets more active. The device is Wi-Fi connected. CleverPet gradually introduces dogs to what they have to do. It’s like a Pavlovian response.

CleverPet Hub keeps dogs engaged when you leave the house, and it reduces their anxiety. You can use it to teach dogs commands. If you say “left” with your recorded voice, the dog can engage the left touch pad.