I’ve survived more than 20 Consumer Electronics Shows. This year, I’m going to walk miles and miles of exhibits again at CES 2017, the gigantic tech trade show in Las Vegas next week. If you’re a newcomer or even a veteran who needs reminders, please heed some advice to avoid nightmares and hangovers.

Just like last year, the survival tips are affected by bag restrictions and entrance searches at all of the big venues. The threat of terrorism has put a damper on the wanton luggage follies of years past.

That means, sadly, I won’t be able to get much use out of my brand new backpack roller (which my coworkers have dubbed my secret weapon in years past).

The 50th annual show opens on Tuesday, January 3, for the 6,500 or so press attending the show. The press events continue on January 4. But the 2.4 million square feet of exhibit space will open at 10 a.m. Thursday, January 5. VentureBeat writers Ken Leung and John Brandon will join me, and some of my colleagues will be comfortably watching livestreams at home. 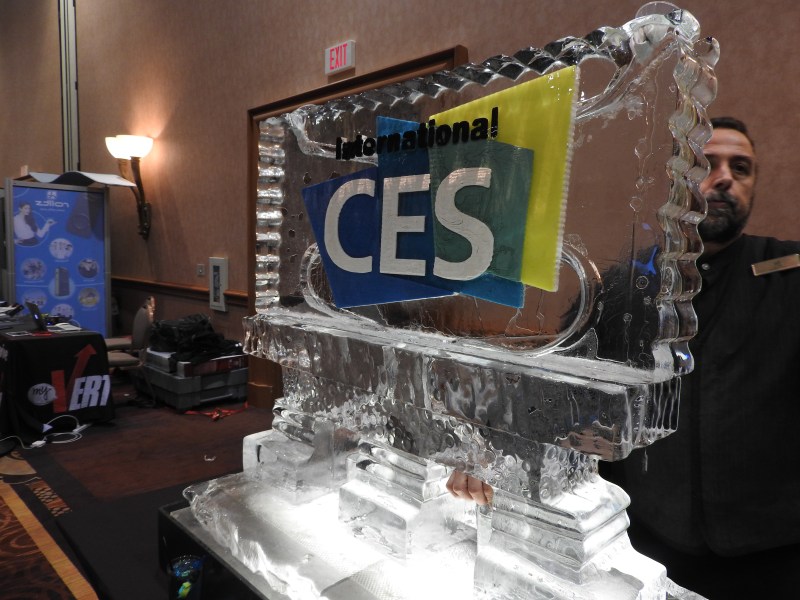 Gary Shapiro, chief executive of the organization newly renamed Consumer Technology Association, told us in September that 4K TVs are selling at faster rates than their HDTV predecessors, with 20 million expected to sell in the U.S. in 2017, up 5 million from 2016. We’ll see 4K TVs from many of the big consumer electronics companies, as well as 8K TVs and monitors.

And we’re also going to see a lot of drones, wearables, augmented reality, virtual reality, robots, smart cars, health gadgets, 3D printers, and Internet of Things objects. There were 177,000 people at last year’s show, and the CTA hopes to rein it in a bit to 165,000 this year. That’s insanely crowded, even for Vegas.

I pay attention to the overall numbers because they are like bellwethers for the tech economy. Companies go there to be perceived as cool, and I go so that I can stay up to speed on the latest technology. We can expect to see more than 3,800 exhibitors.

Now I am one of those people who is getting a little tired of each new Internet of Things announcement. But if Masayoshi Son, CEO of SoftBank, is correct, we’re not doing with them yet. He anticipates that by 2018, the number of Internet of Things devices will surpass the number of mobile devices. By 2021, we’ll have 1.8 billion PCs, 8.6 billion mobile devices, and 15.7 billion IoT devices. He predicts we’ll get to a trillion IoT devices.

Apple doesn’t attend the show, but just about every other tech giant does. CES is where you’ll find the powers that be. 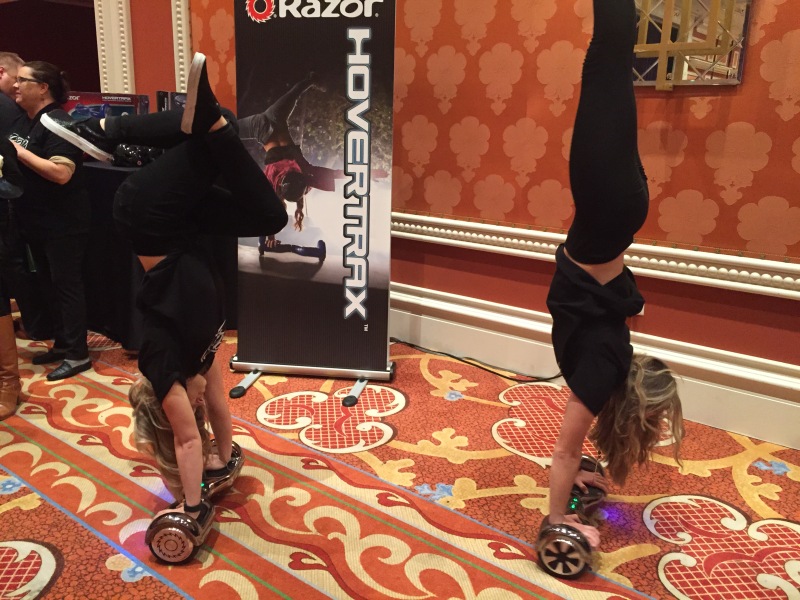 Above: Models show off the Razor Hovertrax at CES 2016

Some of these tips are recycled from past years, but the new baggage rules make that tricky. You’ll just have to travel lighter. This year, the CTA intends to search bags at the entrances to the show floor just as it did last year. We survived that hassle a year ago, but don’t forget to take possible delays into account when planning your schedule.

Shapiro noted, “Tragically, our world has also seen an increase in violent and inexplicable acts. We will enhance our security measures accordingly.”

Rolling bags won’t be permitted on the show floor, and you can only carry two bags, each smaller than 12 inches by 17 inches by 6 inches. Last year, we were able to get search stickers at the first search place, and then use those to circumvent the bag checks every time we came in and out of buildings. However, I wouldn’t count on that happening every time you go into a new venue.

You need a CES badge and a government photo ID. If you can, you should pick up your badge at the airport or one of these locations. Media is subject to the same rules, with some allowances, so long as you have a media badge.

On your crowded flights, try to travel light. For Southwest, try to check in exactly 24 hours ahead of boarding. Check in your baggage if you don’t have to get anywhere fast. Be prepared for long cab lines or rental car check-in lines. (Services like Uber and Lyft were very useful last year at CES.)

Bring your comfortable shoes, and try not to stay out too late at the parties. If the parties are what you care about, check out the Karennet party list. Many of them are invite-only. Remember to swap phone numbers with the people you are meeting with so you can coordinate. Incorporate drive and eating times into your calendar, or use a calendar that does that automatically for you (I’m still looking for one).

Smartphone reception is better than it used to be, but it’s still probably prone to interference. Text message is usually a decent way to communicate with coworkers. We always seek out the Wi-Fi havens in the press rooms or wherever we can find them. But carry a MiFi or activate a personal hotspot if you can; even hotel Internet connections are likely to be stressed to the limit during the show. If you’re responsible for uploading video, good luck with that. 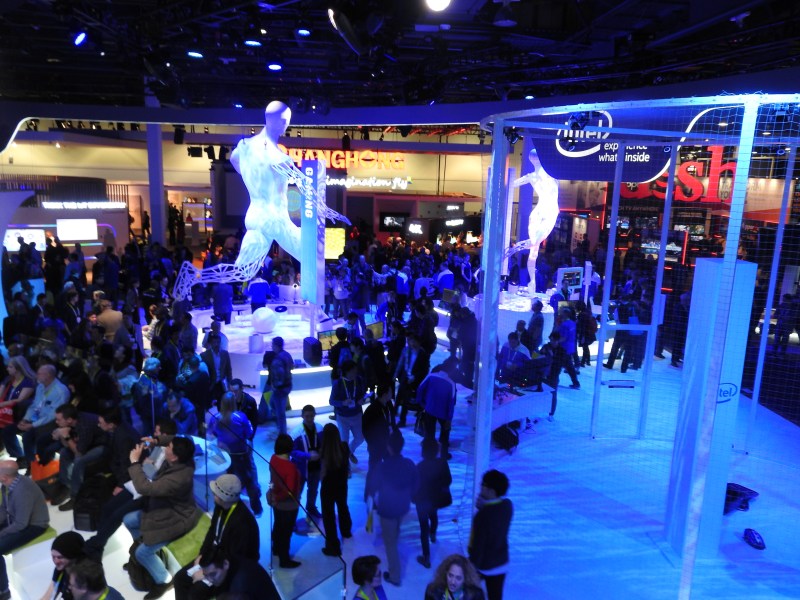 Pack enough business cards. If you’re exhibiting, wear your company brand on your shirt. Try very hard to keep from losing your phone. I wear a jacket with zippered pockets so I can put my phone and wallet inside.

Schedule your appointments in locations that are near each other. Arrive early for keynotes because the lines are long. Drink lots of water. Get some sleep — you really don’t have to party every night. Don’t miss your flight on the way out. Pack up a bunch of snacks early on to avoid getting stuck in morning or lunch lines. Take a good camera because what happens in Vegas … gets shared on the Internet.

Lots of embargoed news will break Monday through Thursday as tech companies try to steal each other’s thunder and catch some early buzz. The Consumer Technology Association analysts will open a press-only event with sales stats and trend forecasts for 2016. The event officially kicks off in the afternoon with a press-only CES Unveiled reception, where scores of companies that have won innovation awards will be first to show off. You’ll start seeing posts about cool stuff at that party on Tuesday evening, particularly from all the tech journalists who are chained to tables at the party.

Press Day at CES has now morphed into a day and a half. It starts around 1 p.m. on Tuesday and then runs from 8 a.m. to the early evening on Wednesday. Qualcomm has a press event at 2 p.m. on Tuesday, while LG kicks off the Wednesday press events at 8 a.m. You should search for CES press event livestreams, particularly if you can’t get in. 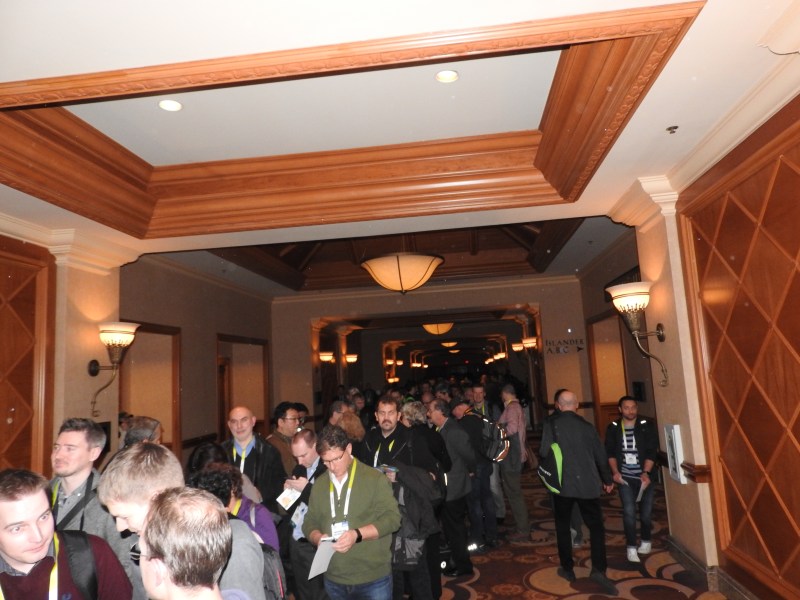 Above: The line for the 2016 CES Unveiled party.

Most of the press events are at the Mandalay Bay, although Sony has an event at 4:45 p.m. at the Las Vegas Convention Center on Wednesday. These events are closed to non-press attendees, but we’ll be writing posts about a lot of these events.

At 6:30 p.m., Nvidia CEO Jen-Hsun Huang will give the opening keynote for the first time. At the keynote, the CTA’s Shapiro will welcome the early crowd at the sprawling Palazzo ballroom at the Venetian Hotel. Then Huang will talk about transforming Nvidia from a graphics chip maker to an artificial intelligence company. We’ll close the evening with the Pepcom Digital Experience party, a private event at the Mirage Hotel.

At 10 a.m., the show floor formally opens in the Las Vegas Convention Center and World Trade Center, the Westgate Las Vegas, and the Renaissance Las Vegas. We’ll see keynotes by Arnold Donald of Carnival, Richard Yu of Huawei, Carlos Ghosn of Nissan, Barry Diller of IAC and Expedia, and Michael Kassan of MediaLink. That’s a strange cast of characters at a tech event, but it shows you how ubiquitous tech has become. We’ll catch more product unveilings at the invite-only Showstoppers Party at the Wynn Hotel.

The Las Vegas Convention Center (LVCC) is cavernous. It stretches from the North Hall, where a lot of the car makers and speaker manufacturers gather, to the vast Central Hall and the multilevel South Hall. It’s a couple of miles from one end to the other, so try to space out your appointments. A rookie mistake: not paying attention to the exhibit floor map about where your appointments are.

It’s not easy to get from the LVCC to the Sands Expo during the rush period, but the CEA provides shuttle buses for that purpose. Parking is scarce, and you’ll pay $20 or more for it each day. 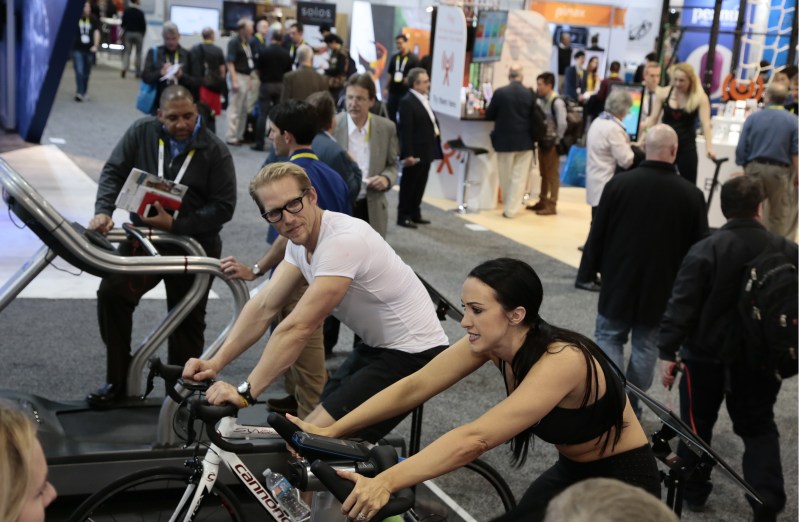 The Tech West area includes the Sands Expo, The Venetian, the Palazzo, Wynn Las Vegas, and Encore at Wynn. Tech South, which includes the Aria, Cosmopolitan, and Vdara hotels, is host to C Space activities. Sadly, we won’t see any high-ranking federal officials at this year’s event.

When the exhibit floor closes at 6 p.m., there’s a mad rush for the taxi line, the shuttle buses to major hotels, the parking garages, and the monorail. Try not to get stuck in gigantic traffic jams out on the Las Vegas Strip and anywhere else near the main convention center; maybe wait out the rush at a coffeehouse or hotel bar.

If you’re still up for hearing talks, Steve Mollenkopf, CEO of Qualcomm, will speak from 9 a.m. to 10 a.m. at the Venetian’s Palazzo Ballroom, while Kevin Plank of Under Armour will talk at 3 p.m. to 4 p.m. at the same venue.

I’m taking off a little early this year, flying out on this morning. I suspect a lot of people will be doing so, so watch out for the stampede.

If you hate crowds, this may be the day to show up. The VB crew will be gone by this point, and we’ll be home contemplating our picks for the top CES trends, the best products and services, and awesome images from the show. But the show floor will be open from 9 a.m. to 4 p.m.

If you’re smart, you’ll take some painkillers and a vacation day before you return to work.