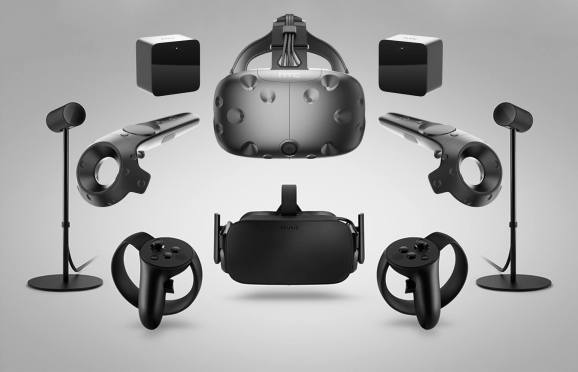 The Vive and Oculus Rift systems.

I’d wager most people who bought the HTC Vive love the unit but wish a new version would bring key improvements. A slimmer design and lighter cord, a better fit for the face and more ergonomic controllers without hard-to-reach grip buttons are all near the top of the early adopter wish list.

HTC relies on Valve’s lighthouse tracking technology to make the Vive and its controllers work. Earlier this year, Valve opened up that technology to a wide range of partners. While none of these partners have officially announced products compatible with this SteamVR Tracking technology yet, early buyers are anxious because future headsets and accessories could be lower cost if you already have the VR tracking system installed.

This means anticipation is high for CES next week. Really high. The event, spread across Las Vegas, is one of the world’s biggest consumer electronics conferences. Last year, HTC used CES to offer a first hands-on demo with the Vive Pre developer kits, giving early adopters their first look at what consumer room-scale VR looks like. Given this anticipation, rumors have been circling that HTC is set to reveal the next iteration of its Vive VR headset at CES. To put it plainly: they’re not true.

HTC confirmed in a note to VR news site UploadVR that it will not be announcing a “Vive 2” at this year’s show.

“There is no truth to the rumor of launching Vive 2 at CES 2017,” the official statement from HTC reads. “At Vive, we are laser focused on building out a strong and growing ecosystem for current and future Vive owners so they can experience the best room-scale VR with the most compelling content available.”

It is also worth noting that, while we expect major announcements and VR-related reveals next week, Oculus is not listed as an exhibitor at CES this year. Facebook is, but there is no booth listed. Last year at CES Oculus had a very large booth on the show floor at the Las Vegas Convention Center. That doesn’t appear to be the case this time around. It makes sense on multiple levels, given that Facebook seems to be absorbing the Oculus brand, and they just shipped Oculus Touch a couple of weeks ago. CES isn’t really necessary for Facebook because if you want to check out their latest VR efforts you can go into one of hundreds of stores around the country for a demo of the Oculus Rift.