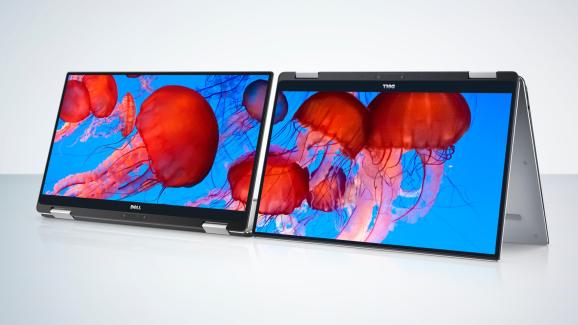 In conjunction with the CES conference in Las Vegas this week, Dell today is officially introducing a new 2-in-1 version of its highly regarded XPS 13 laptop. This follows a leak of the device yesterday on Dell’s own website. Now that a convertible XPS model is coming out, the XPS line may more directly compete with HP’s Spectre x360 and Lenovo’s ThinkPad Yoga.

The machine features a 7th generation Kaby Lake Intel Core i chip (i5 and i7 options are available), Intel HD Graphics 615 integrated graphics processing unit (GPU), 4-16GB LPDDR3 RAM, a 128GB-1TB solid-state drive (SSD), a 720p webcam on the bottom of the display with support for Windows Hello, a fingerprint scanner, a 46 watt-hour battery, and a 13.3-inch touchscreen, available in QHD+ or FHD configurations.

The bezel is very narrow, in keeping with the XPS style. The fanless PC offers an SD card slot and two USB-C ports, and a USB-A to USB-C adapter comes in the box.

Probably the most significant components on this PC, though, are the hinges, which bring it more in line with Dell’s Inspiron series. They felt robust enough in the few minutes I had to try them recently during a press briefing in San Francisco.

The question is whether people will want the convertible option when the laptop is fine as is. The convertible XPS 13 starts at $1000, which is $200 more than the XPS 13 laptop. It’s available starting on January 5.