Valve updated its Hardware & Software Survey today for December 2016, revealing that the majority of its user base is now on Windows 10. The latest and greatest from Microsoft is growing faster than its predecessors, but has recently slowed and is still below 25 percent market share. On Steam, the figure is over 50 percent, proving again that gamers tend to be early adopters.

In its first month, Windows 10 adoption on Steam passed Windows 8, Windows Vista, Windows XP, Mac OS X, and Linux. After two months, Windows 8.1 was also conquered and 10 months in, Windows 7 was dethroned. After more than a year, every other Steam user is on Windows 10.

All other Windows versions lost adoption on Steam, leaving Windows 10 to pick up the scraps. Breaking down the numbers even more, here is how each operating system version fared: 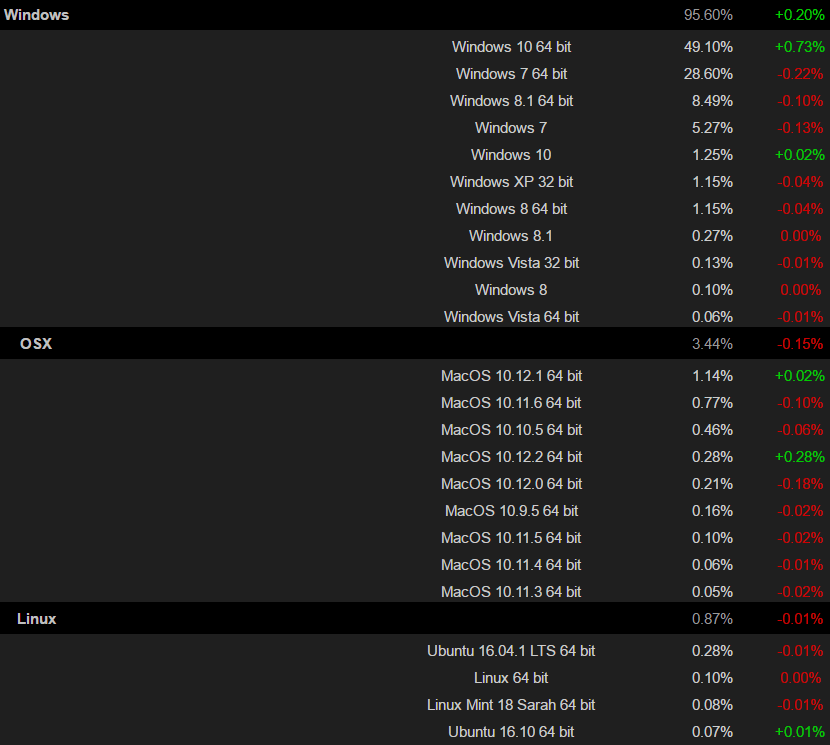 Overall, Windows still dominates Steam. OS X was down 0.15 points while Linux lost 0.01 points in December, but these are minor changes. While the three operating system families fluctuate from month-to-month, Windows has been above the 95 percent mark on Steam for as long as we can remember.

Windows 10 is a service, meaning it was built in a very different way than its predecessors so it can be regularly updated with not just fixes but new features too. The next release is the Windows 10 Creators Update, slated for release in “early 2017.” Gamers will be particularly interested in this update because it is rumored to bring a new “game mode.”