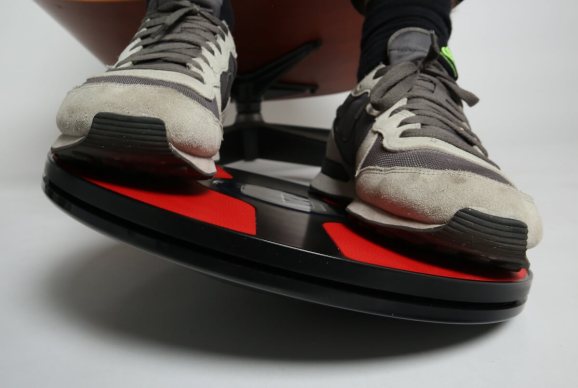 3dRudder Wireless lets you control your games and apps with your feet.

3dRudder wants virtual reality users to get off on the right foot. The New York startup has created a wireless foot-powered controller for PC games, mobile apps, and VR headsets.

The company unveiled what may be the strangest product at CES 2017, the big tech trade show in Las Vegas this week. But hey, it is a CES 2017 Innovation Awards Honoree in two categories, Gaming and Accessible Tech. And when you think about it that way, it may not be such a bad idea, as 3dRudder Wireless adds a fourth axis of motion for total VR immersion while leaving your hands free to use other devices.

3dRudder Wireless joins the 3dRudder Original (the wired version is out now) that has a USB cable connection and introduced the world to a new way to move in VR for computer-aided design (CAD) software design, B2B marketing, and gaming.

Designed for use while seated, the circular 3dRudder disc makes movement in more natural, the company said, like driving a car or walking down the street. Pressure sensors and heel-toe movement help you move front/back, left/right/, rotate left/rotate right, and up/down with minimal fatigue.

Based on the simple premise that using your feet is the most intuitive way to get around, 3dRudder lets you move the way you’re used to.

3dRudder was designed by an architect yearning for a foot-powered 3D mouse to allow him to use his hands for design while moving in a 3D environment. Architecture, real estate, tourism and health care industries are looking at 3dRudder as part of their entry into the VR mindset.

The device has Bluetooth 4.0 connectivity, and it will be available in the summer for $200. It has a built-in rechargeable 5-volt battery with about 12 hours of usage on a charge.

3dRudder was founded in 2014 in Marseille, France, by Stanislas Chesnais and Valerio Bonora. The company is now based in New York, and it raised 1.4 million euros in mid-2016.