After years of anticipation, Faraday Future has revealed its planned production vehicle to the public. The embattled electric car company is under tremendous pressure to show that it’s not just producing vaporware, especially after enduring weeks of bad press. But today’s announcement may force doubters to eat crow … at least for now.

Nick Sampson, the company’s senior vice president of research, development, and engineering, opened up the press conference by telling attendees they were not going to just see a new car; they were about to “witness day one of a new era of mobility.” 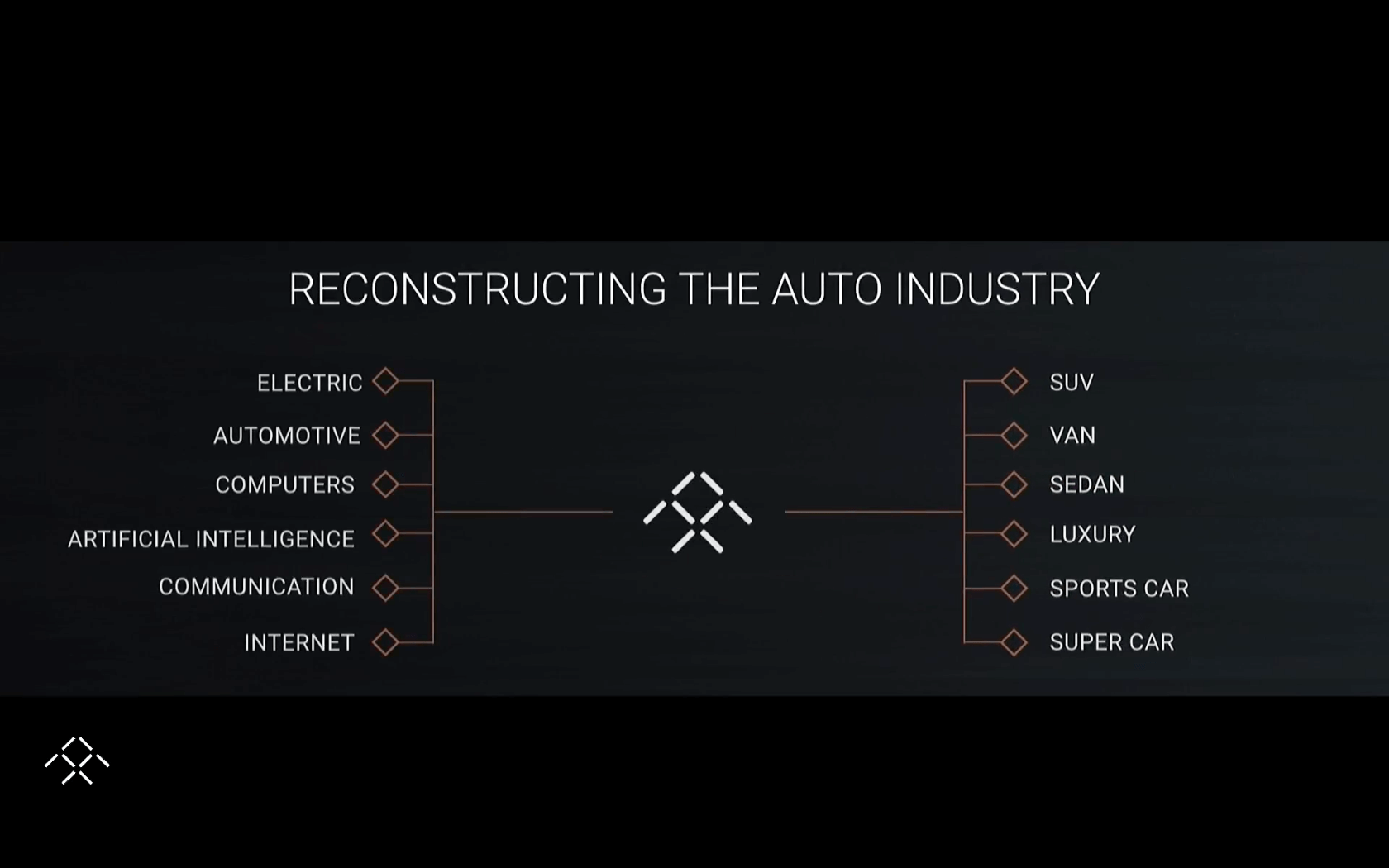 Faraday Future employs more than 1,400 people worldwide and has filed 1,940 patents to date. In the case of the FF 91, it only took the company 2.5 years to get from concept to beta testing. Samson explained that Faraday wants to flip the automotive industry on its head and rebuild it independent of fossil fuels, while tapping into technology outside of traditional car manufacturing. “The world is on the cusp of the evolution of the automobile since its introduction,” he claimed. “Faraday Future intends to lead that charge.”

The first commercial vehicle from Faraday is called the FF 91, and it’s billed as not just an electric car, but one with connectivity, intelligence, and performance that surpasses those currently in the market. Preorders for the first vehicles have begun, with a $5,000 fully refundable deposit and an option to upgrade to the launch series called the “Alliance edition.” Cars are scheduled to be delivered in 2018.

An environmental protection fund will receive part of the proceeds from any 300 Alliance edition FF 91 vehicles that are purchased. The specific fund will be determined at a later time.

The company declined to specify the MSRP. 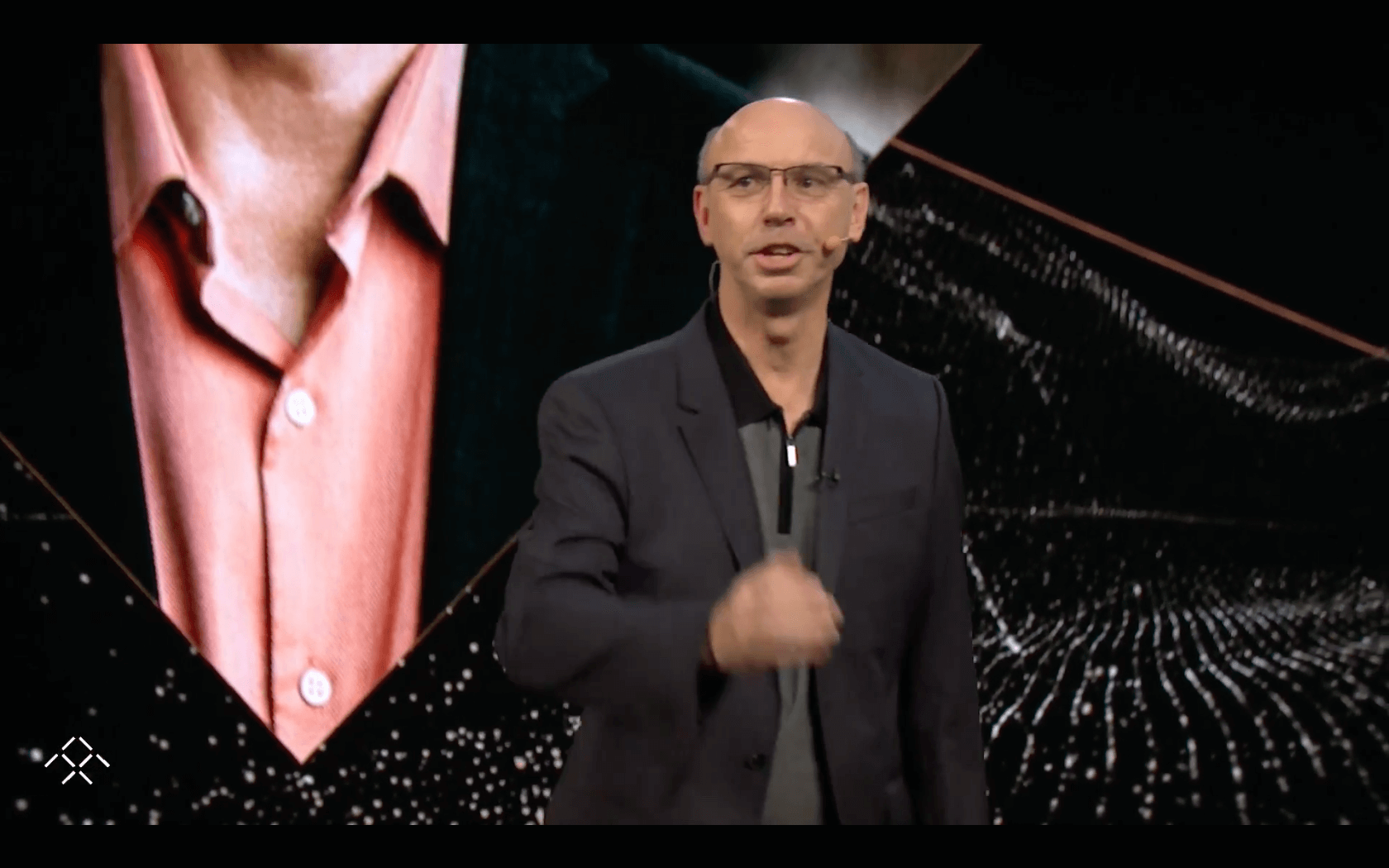 Sampson touted Faraday’s ability to keep drivers and passengers connected to their digital lives. No matter what device or platform you prefer, you’ll be able to access your favorite apps, audio files, navigation, or even watch your favorite sports team play. “Wherever FF 91 takes you, bring your digital life along,” Sampson said. If you happen to go on a road trip, you can plan it at home and share the itinerary and route with the FF 91. Should you deviate from the scheduled trip, you can send an email to your friends or family using just your voice.

The car is equipped with streamlined dual antennas with 802.11 ac in-car Wi-Fi, and connectivity through multiple CAT6 LTE modems.

Faraday has also incorporated artificial intelligence, meaning that the car will constantly learn about you, the driver, to provide a more personalized experience. The FF 91 offers profile identification, seamless entry, and multi-screen connection, meaning that no matter where you are in the car, the system will continue to build its knowledge base and be configured to your seating style. “No matter what vehicle you’re in, it will feel like your vehicle,” Sampson said.

Hong Bae, the company’s director of ADAS and self-driving, called the FF 91 the “smartest car you’ll ever drive.” It doesn’t have a key, because it recognizes who you are using facial recognition. There’s also a driverless valet feature, which means if you hate parking, simply get out of the vehicle, press a button on the Faraday mobile app, and the car will park itself. 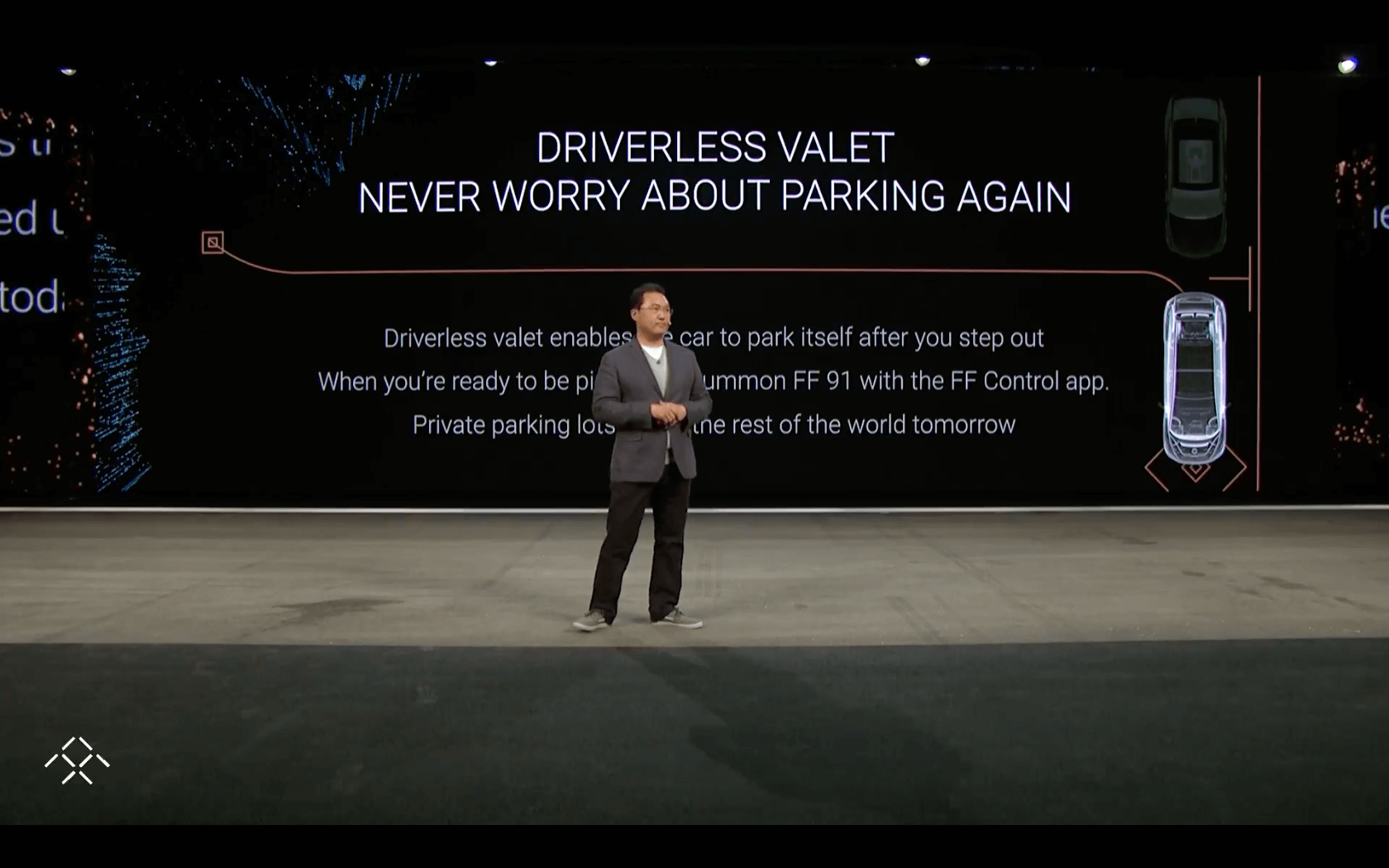 “The more you drive, the more it learns about you, forecasts your needs, adjusts car settings for comfort, performance, and safety,” Bae said.

The car is equipped with 10 front and rear-facing cameras, 13 short- and long-range radars, 12 high-performance ultrasonic sensors, and 1 high-definition LIDAR, which is featured on the front of the FF 91 pulsing lasers to intelligently map the environment and deliver the safest ride possible.

As for performance, the FF 91 can go 378 miles (EPA adjusted) without a charge — the equivalent of a drive from Los Angeles to Silicon Valley with some miles left to spare. “No other electric vehicle can do that,” said Peter Savagian, Faraday’s vice president of propulsion engineering. The car’s battery pack offers 130 kilowatt hours of energy, and the vehicle presents 1,050 horsepower — “an insane amount.” 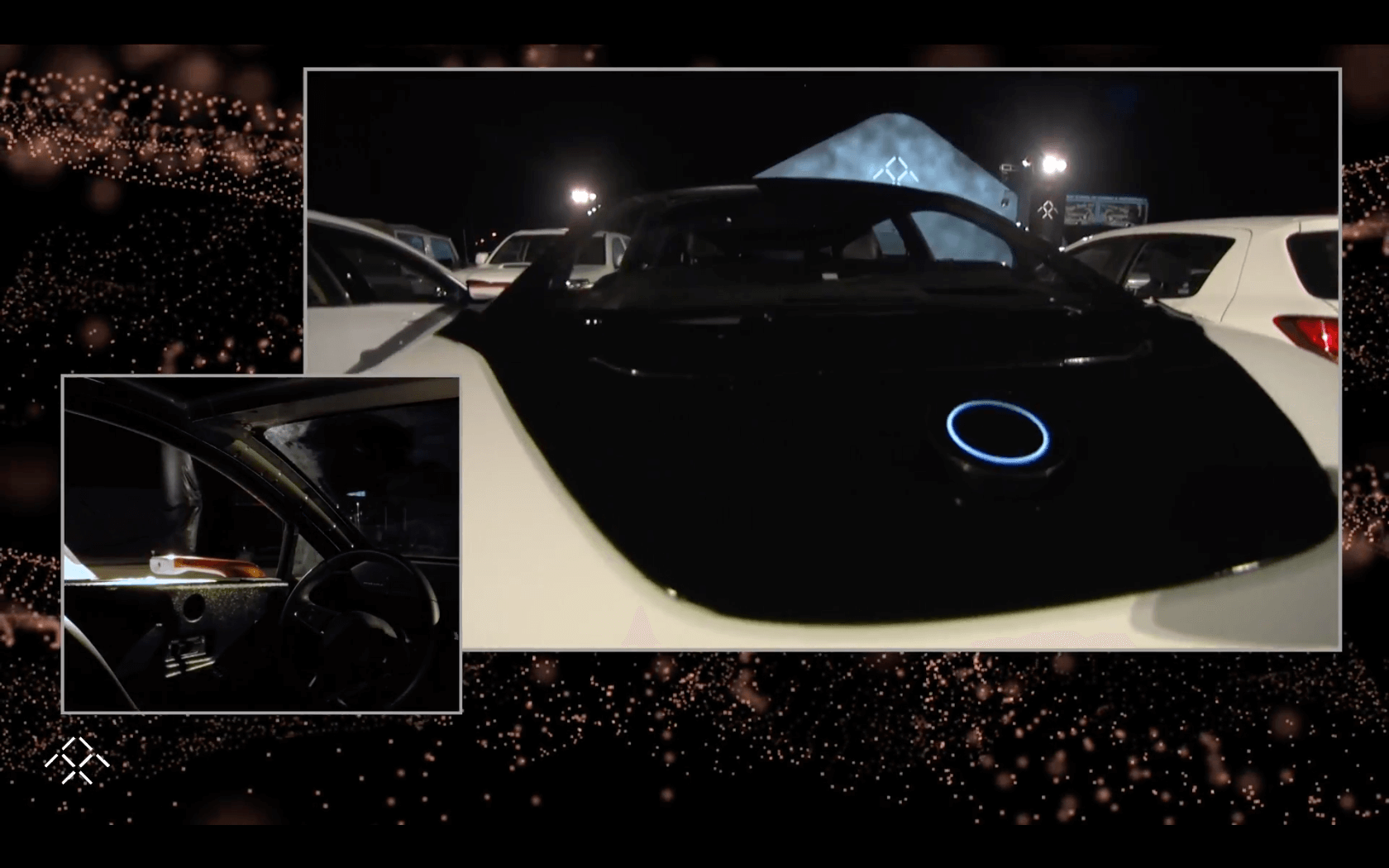 The company presented demonstrations showing the vehicle’s speed, putting it head to head against some of the fastest vehicles on the market today, including Tesla Motor S and X and Ferrari. Faraday claimed that its car can go from 0 to 60 miles per hour in 2.39 seconds.

While the presentation was mildly impressive, there was a bit of an embarrassing moment when the vehicle failed to follow commands from LeEco chief executive Jia Yueting to move to the center of the stage. After a bit of an update, the car complied. 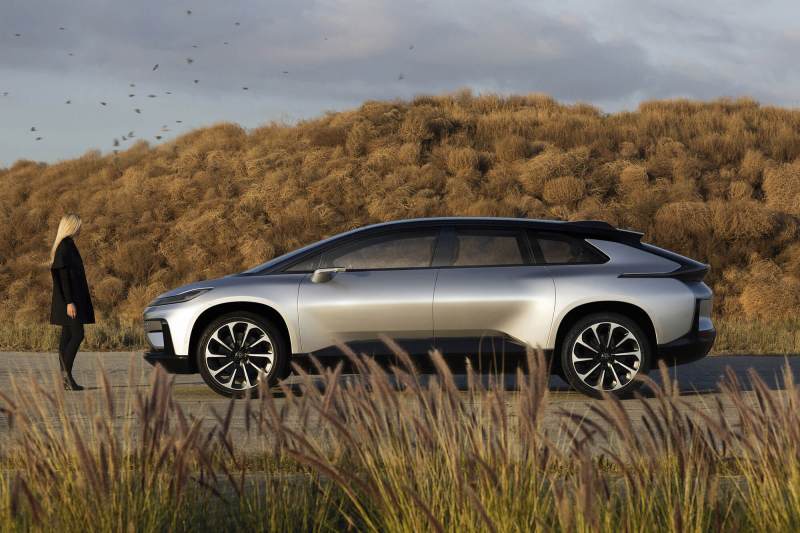 To say that things haven’t gone smoothly for the car company up till now is an understatement. Heading into this year’s CES press conference, Faraday has to deal with the question on everyone’s minds — is it able to do what it promises, and how exactly will it pull it off? For one thing, there have been reports of multiple executives departing the company, including the global CEO and cofounder of LeEco, Ding Lei; chief brand and commercial officer Marco Mattiaci; vice president of product marketing Joerg Sommer; general counsel James Chen; finance director David Wisneiski; product strategy chief Robert Filipovic; head of public relations Stacy Morris; and others.

The Tesla challenger sought to make an impact in 2015, announcing that it would establish its first car factory in one of four states in the U.S. Ground was broken last spring in Nevada, but months later, work was abruptly halted on the $1 billion facility amid allegations from at least one contractor who claimed their company was owed $21 million. The resulting investigation caused Nevada’s state treasurer to describe Faraday Future as “a Ponzi scheme.”

“We’ve expressed concern from the beginning that Faraday didn’t have the funds to undertake or complete the project,” Nevada treasurer Dan Schwartz said in November. “Within the last several weeks, our concerns remain unabated.”

Far behind the curve

The launch of a production vehicle puts Faraday Future behind the curve, as Tesla, and even some traditional car manufacturers, have already released their own electric cars. The company remains defiant, saying that “skepticism and negativity only strengthen our conviction to redefine sustainable mobility” and have taken shots at detractors in the media.

Skepticism and negativity only strengthens our conviction to redefine sustainable mobility. Decide for yourself on Jan 3rd. #CES2017 pic.twitter.com/cjKSD5gROa

Media pessimism is standard fare for disruptors. Deliberate negative info from press and competitors is the welcomed risk of innovation. pic.twitter.com/1lgtlKjgh1

Today’s reveal is widely seen as a make or break moment for the company — an unnamed former executive told The Verge that should Faraday Future fail to raise money after CES, it will run out of funds.

But after tonight’s presentation, Sampson didn’t mince words when talking about the doubters and haters, reiterating that amid all of the criticism levied at the company, Faraday has introduced the car it promised it would make. There were no mentions of the Nevada factory or other potential problems it is facing, but we’re still at least a year away from delivery of the first vehicles. Now the pressure’s on Faraday to see if it can keep surprising everyone.