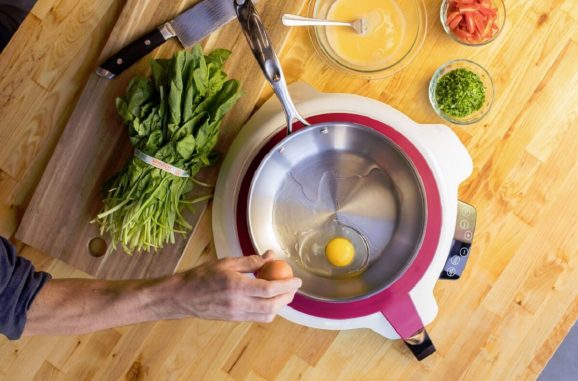 General Electric’s FirstBuild subsidiary is announcing a way to precisely control the temperature on your stovetop.

The Paragon Mat is like a “cruise control” for the cooktop, bringing precision to induction cooktops using temperature control instead of traditional power control. FirstBuild introduced the product at CES 2017, the big tech trade show in Las Vegas this week.

Have you evern wondered why ovens cook at precise temperatures like 325 degrees, but stovetops are limited to ambiguous settings like low, medium, and high? That’s why we burn the first pancake and undercook the second one. The Paragon Mat solves this problem by precisely controlling pan temperature, automatically adjusting burner output so that cooking will be consistent.

When controlling with traditional settings like medium-high, pan temperatures can vary dramatically throughout a single cooking session, resulting in inconsistent and even puzzling results. By contrast, the Paragon Induction Cooking System allows chefs to specify a cooking temperature, just like they have been doing in the oven for decades. No more overcooking or undercooking due to unknown temperatures.

“Precision cooking is the most significant innovation in home cooking since oven temperature control,” said Larry Portaro, director of FirstBuild, in a statement. “The original Paragon was the first induction cooktop designed for sous-vide cooking, earning its place in the hearts of foodies and dinner party hosts. The Paragon Mat dramatically expands Paragon’s utility by controlling pan temperature, making Paragon the new cooktop of choice for everyday chefs.”

Home cooks will find that the Paragon Mat takes the guesswork out of staples like bacon and grilled cheese. Meanwhile, the Paragon Mat allows the aspiring and experienced to easily tease out the subtle nuances in their favorite dishes — like the difference between light-brown and medium-brown butter, or the magic that creates eggs-over-medium.

The Paragon will sell at retail for $350, but it will cost $200 on the first day of the Indiegogo campaign.