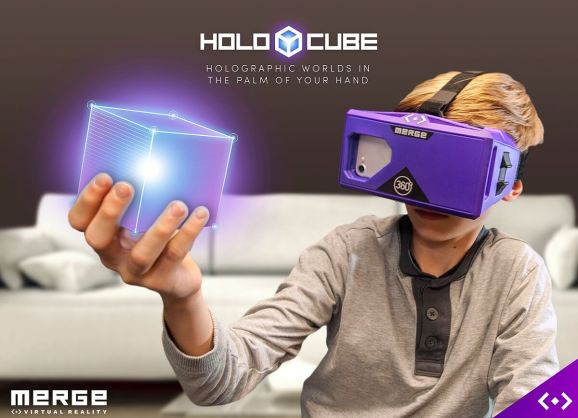 It isn’t easy to stand out among the virtual reality headsets available today. But Merge VR is trying to do something different with its holographic toy, the Holo Cube, which lets users interact with holograms through augmented reality technology.

The Holo Cube is a block that you hold in front of your face while looking through the Merge VR/AR headset. The company is showing off the toy at CES 2017, the big tech trade show in Las Vegas this week.

“Toys are the tools we use for growing up, and our Holo Cube offers brand new ways to learn, play, and connect with others,” said Merge VR founder Franklin Lyons, in a statement. “Rather than using the typical interfaces of 2D screens, we’re developing physical products that merge the real world with the digital, and creating new ways for imagination and creativity to flourish.”

Merge VR is showing experiences that bring the cube to life in users’ hands — from drawing with music to caring for a virtual space pet to building a mini-block world. Pairing Holo Cube with the company’s Merge VR Goggles lets users interact directly with holograms while freeing both hands for the immersive experience.

“We want to unlock an entirely new digital world for children that’s always safe, exciting, positive, and playful,” said Merge VR cofounder Andrew Trickett, in a statement. “HOLO CUBE continues what we started with our revolutionary soft goggles, and it’s just the beginning. We are developing an entire line of products that will create more magical experiences for kids everywhere.”

Merge is also unveiling several new colors of its Merge VR Goggles at CES. Merge VR’s recently announced universal motion sensing controller for virtual reality will also be available for demos, and dev kits will be available in 2017. Founded in 2013, Merge VR is working on a variety of VR and AR products.