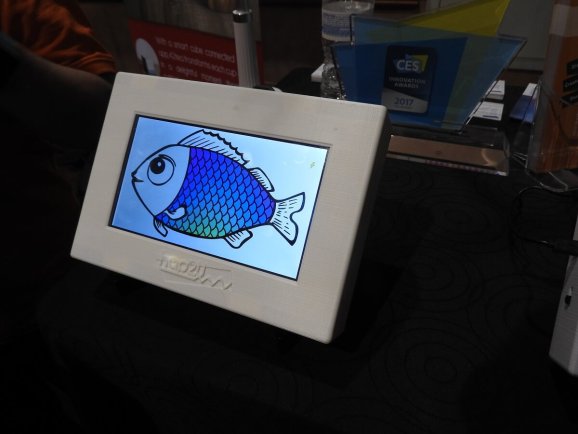 Gamers are familiar with the sense of touch you get from rumble controllers, but it’s a pretty blunt form of force feedback. But Hap2U thinks we’ve all been out of touch.

So the five-person French startup has created a prototype of touch-feedback technology for touchscreens. I felt the demo at the CES Unveiled party this week at CES 2017, the big tech trade show in Las Vegas this week.

We’ll see if this kind of tech can help create a comeback for haptics technology, which Immersion pioneered on a variety of devices. In the demo at CES, I ran my finger up and down an image of a fish, and I could feel its scales. I also turned some knobs with my fingers and felt the resistance on the touchscreen.

Hap2U said its patented haptic technology is embedded inside the touch screen. Smart piezo actuators generate an ultrasonic vibration, which controls in real-time the friction below the finger. The user feels as if turning a real knob, pushing a real cursor and perceives various textures.

The goal is to bring the user experience in a new era by providing an accurate haptic interaction to all touch interfaces. The company is targeting a broad range of usage and applications: mobile, automotive, gaming, and also e-commerce.

Here’s a video of what it’s like, but I’m sorry you can’t actually feel what I felt.