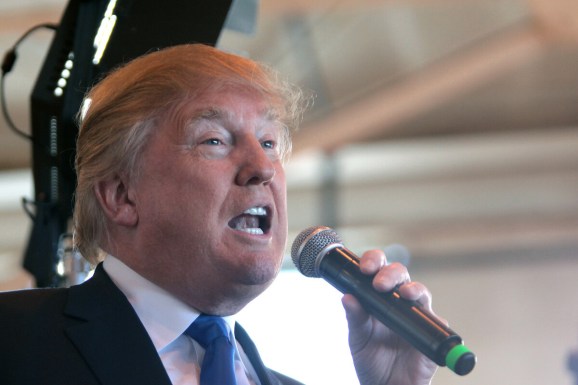 Donald Trump speaks at a rally in Mesa, Arizona.

As Donald Trump has moved from being just another Republican candidate to the president-elect, speculation has intensified about the “loose cannon” approach he appears to take when it comes to using Twitter. Does he just tweet whatever he feels like saying at any moment, or are his tweets crafted by a PR team?

According to Sean Spicer, who will soon become the Trump’s press secretary, no one — including Spicer — has any idea what the incoming president is going to say until they see it on Twitter (or get the blowback from one of his statements, presumably).

“I do not get a memo [about what the tweets will contain]. He drives the train on this,” Spicer said during an event on Wednesday night in Chicago, according to a report by the Wall Street Journal. The event also included President Obama’s former press secretary, Robert Gibbs, as well David Axelrod, a former Obama adviser.

Although Spicer said Trump chooses what to tweet and when, he hasn’t always had that kind of control. His campaign staff took over his Twitter account just before the election, although he regained his control over it after winning the campaign.

Spicer said that he checks Trump’s Twitter feed as soon as he wakes up because “it drives the news.” And he suggested that it’s not the incoming president’s job to fact-check everything before he posts it on Twitter.

At the same time, however, Spicer rejected the idea that Trump doesn’t consider what he is going to say, or what the potential outcome of his comments might be. It’s a “misconception… that he is just randomly tweeting,” Spicer said. “He is a very strategic thinker.”

So far, that strategic thinking has led to a political faux pas involving relations with China, repeated allegations about millions of illegal voters — a claim that has been repeatedly proven false — and what appeared to be a threat that the U.S. would enhance its nuclear-weapons program, followed by a comment encouraging a potential arms race. Trump has also complimented Russian president Vladimir Putin on his political strategy and used his Twitter account to criticize the CIA.

Trump’s Twitter comments have also caused often dramatic movements in stock prices, including a drop in Boeing shares after he criticized the company’s Air Force One contract (using inaccurate numbers) and a similar decline after he said the Lockheed-Martin F-35 program was too expensive.

After Trump’s remarks about nuclear weapons, senior staff rushed to qualify his comments, saying there were no plans to add more weapons. Similar qualifications were required after Trump suggested he was not confident in the work of the U.S. intelligence community, comments that came just before a report that his administration may cut back or reorganize the existing intelligence agencies in some way — a claim that Spicer says is untrue.

Despite the impression that much of his job will consist of trying to put out fires that President Trump starts on Twitter, the incoming press secretary said he didn’t see it that way at all. He described it at the Chicago event as “an exciting part of the job.”

Spicer also said that Trump will likely continue to pursue the same approach on Twitter once he becomes the president, because it gives him a direct way to communicate to the American people. The administration is also considering other ways to do this, Spicer said, including reaching out to bloggers and other non-traditional media outlets that aren’t usually part of White House briefings.

Trump’s chief of strategy, Steve Bannon, is the chairman of one such outlet known as Breitbart News, a right-wing publication that has boasted about its ties to so-called “alt-right” conservative groups, many of whom advocate a form of economic nationalism that includes overt racism.

In any case, if you enjoy the prospect of having the U.S. president pursue various aspects of national and foreign policy via Twitter, and engage in public attacks on those he perceives as his enemies, it would appear that you are in for an exciting four years.