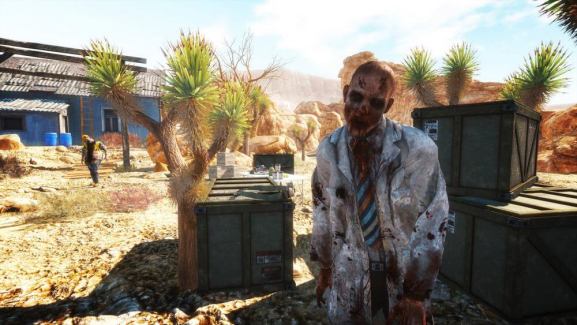 Arizona Sunshine by Vertigo Games is a great game. We liked it so much, in fact, that we awarded it the designation of our favorite VR game of 2016. The complete single player campaign mode, cooperative multiplayer support, and addictive horde mode delivered a lot of content to a game that was already overflowing with fun and engaging gameplay mechanics.

At CES 2017 in Las Vegas, NV this week, we caught a glimpse of some new content in the works for the zombie-slaying shooter that’s due to release next month. Outside of the Intel booth area on the show floor, there is a short teaser video playing that shows someone on a turret mowing down waves of zombies. After speaking with a representative from Vertigo Games, we’ve confirmed that the new game mode is multiplayer-focused and is set in a post-apocalyptic version of the Las Vegas strip (appropriate because it’s at CES in Vegas right now) as opposed to the Arizona desert featured in the core Arizona Sunshine game.

Each player will take on a specific role in Undead Valley missions with up to four players. Roles include Sniper, Gunner, and two Runner positions. The Sniper and Gunner are intended to provide cover fire for the two Runners that will explore the environment and recover packages that are dropped into dangerously infested areas overrun by zombies. This new game mode is entirely separate from the existing Campaign and Horde modes already in the game and even includes its own self-contained mini-narrative. Throughout the match, you’ll also see supply drops that are valuable, but risky, to retrieve.

The demo at CES was shown running on an Oculus Rift with Touch and will be designed to be endless once it’s available to consumers next month in February. Vertigo Games is undecided on if this will be a free or paid DLC.

Do you have any questions about this potential new game mode? Let us know in the comments and we’ll get to the bottom of it all at CES this week in Las Vegas.

Update: This story was originally posted as speculation based on the above video we recorded at CES, but has since been expanded and updated with official information and details after we spoke with a Vertigo Games representative at CES.