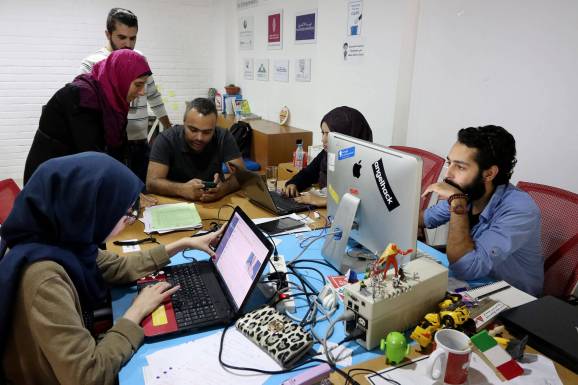 A number of Silicon Valley leaders have banded together to support a crowdfunding effort to build the first coding academy in Gaza. The campaign, which started December 13, is called #PowerUpGazaGeeks and now has the backing of supporters such as Salesforce chief executive Marc Benioff, author Eric Ries, 500 Startups partner Dave McClure, Y Combinator partner Paul Graham, Techstars’ Brad Feld, and many others.

#PowerUpGazaGeeks had an initial goal of $95,000, which would have gone towards purchasing a generator and fuel needed to power a coworking space in Gaza during the evenings and weekends. That was surpassed 10 days after the campaign launched, and a stretch goal of $400,000 has been set to establish the area’s first coding academy, facilitate 22 internships for Gazans at European and U.S. tech firms, and teach high school girls to code.

The aforementioned tech leaders have committed to matching the donations.

Gaza Sky Geeks is the organization orchestrating this campaign. It is the first and only startup accelerator in the country to support female entrepreneurs and is operated by the U.S.-based Mercy Corps nonprofit. This group aims to provide opportunities, innovation, job creation, startup support, online workshops, and inspiration to the “next generation of ladies” entering the tech market.

“Gazans are smart people working on ideas for companies,” said McClure, who also serves on Gaza Sky Geek’s advisory board. “They deserve support and investment just like any other startup founder anywhere else in the world. To some extent, they have even more hustle because they’re working in such a tough environment. They may actually be some of the best entrepreneurs in the world.”

Starting a company in the Middle East, especially in a country with scarce resources and daily threats of violence, can be difficult, but Gaza Sky Geeks appears to be a blessing for some entrepreneurs. More than 100 jobs and $91,000 in revenue has been generated by startups participating in the program. Gaza Sky Geeks has also received awards from Google, Techstars, and others.

With the establishment of a coding academy, the expectation is to “deepen existing developer talent, grow a pipeline of new talent, and inspire more Gazans to learn to code.” A $50 donation would provide a half-day coding bootcamp for 1 student, but $1,000 would fund a week’s worth of tutelage for that student.

Learning is a struggle in Gaza, with an average of six hours of electricity a day provided to the facility in which Gaza Sky Geek operates. These conditions are not suitable for people to learn in, so the original plan was to purchase a generator to make the coworking space self-sustaining. But with the outpouring of support, the team has evolved its thinking to support a more ambitious plan to help a larger group of people with a coding academy.