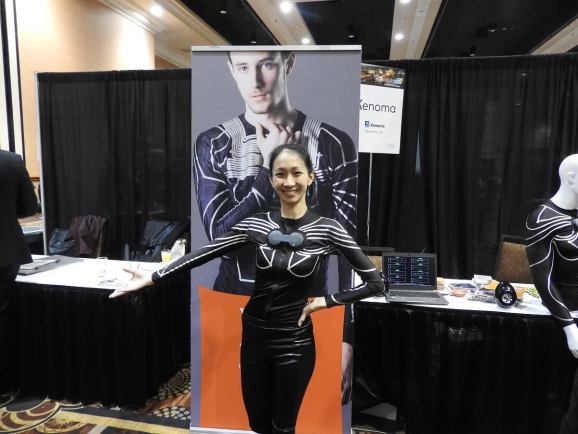 Japanese tech startup Xenoma showed its e-skin motion capture shirt at CES 2017, the big tech trade show last week in Las Vegas. The e-skin translates your body’s movements into digital form, which can then be used to control a character in a video game.

But the shirt can also be used to train athletes and monitor their performance — or record the movements of someone being trained in operating an industrial machine or a vehicle. And it can be used for virtual reality applications.

The e-skin has 14 strain sensors strategically placed to detect the wearer’s body movements that include bending, stretching, and twisting joints. The e-skin hub is placed on the chest, and it transmits sensor data via Bluetooth 4.2.

The e-skin hub can record data at a rate of 60 frames per second. It has a 3-axis accelerometer, 3-axis gyro sensors, and a micro-USB port for recharging. It also has four hours of battery life. The shirt is machine washable.

Xenoma created a software development kit that can be used to make apps for Windows and Android using C# and the Unity game development engine. The $5,000 developer kit for the e-skin will be available on February 1. By mid-2017, Xenoma will launch a $600 consumer version.

Xenoma spun out of the University of Tokyo.