Hyperloop One is working on a transportation technology that can make trains go as fast as 760 miles per hour. The company has raised $160 million in several rounds to build the transportation systems that seem like something out of science fiction.

Despite a lawsuit from former high-ranking employees, the company has moved swiftly to add new executives and expand its search for sites where it can build its lightning-fast transportation networks in cities around the world. (The company denied the allegations and countersued the former employees.)

Hyperloop One continues to build out its 100,000-square-foot Metalworks fabrication facility and 137-acre Apex test and safety site in North Las Vegas, Nevada. Construction of the company’s full-system development loop is underway as Hyperloop One prepares for its “Kitty Hawk moment” in the first quarter of 2017.

Last week, during CES 2017, the big tech trade show in Las Vegas, I met with Rob Lloyd, CEO of Hyperloop One. We talked about the company’s global challenge contest to find the world’s best Hyperloop routes. The list is now down to 35 possible projects around the world, and some cities such as Dubai are actively pursuing approvals.

More than 2,600 proposals were registered in five months, and the semifinalists come from 17 countries. A handful of finalists will be named by May. Lloyd and I talked about that process, as well as what Hyperloop transportation will mean for society in the future. 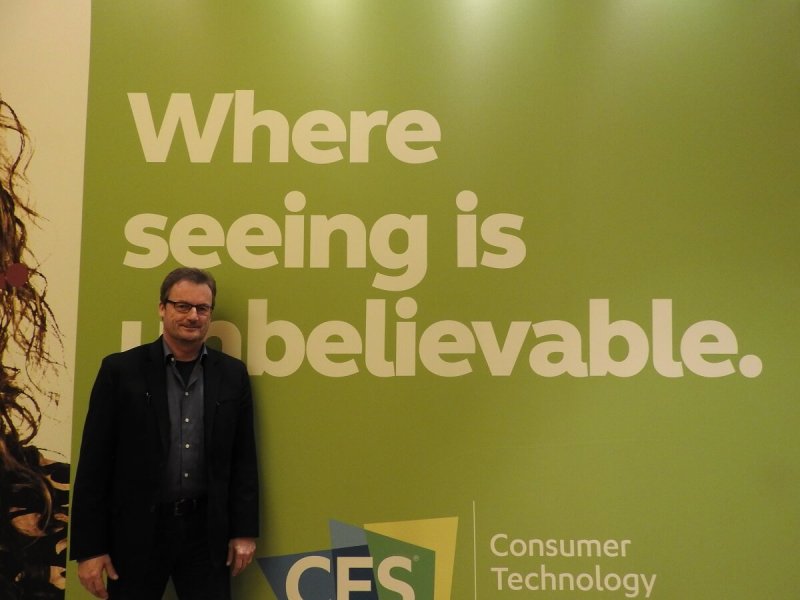 Rob Lloyd: I’d say, if you go back about six months when we announced the global competition, our idea was to say to the market, say to the world, and all of those we thought were interested in something new emerging in transportation, “Give us your ideas.” We saw a constant increase in momentum around participating. A lot of people said, “I’d like to sign up. I’d like to be part of this.” We were very impressed. I was pleasantly surprised by the quality of the submissions. Our team coached many of those entries and helped them go through a template, a format, to come up with those ideas.

We had almost 70 very serious submissions. The top 35, 36, whatever the final number was, really were very interesting to us.

VB: I saw a lot of government money supporting these.

Lloyd: A lot of government support, yes. I think 25 of the 35 ended up with letters of support from local or national governments. We saw a broad community come together to put some of these ideas together. One company sponsored an internal competition, an engineering firm, and made multiple submissions. We saw universities, private enterprises, government institutions.

As we get ready for these workshops that’ll occur over the next few months in the regions — we’ll have one in India for the Middle East in Asia, one in D.C. for Canada and the United States, and one in London for the U.K. and Northern Europe. We’re expecting that a number of those, we’ll be able to take them through a deeper analysis, similar to the other studies underway right now around the world. 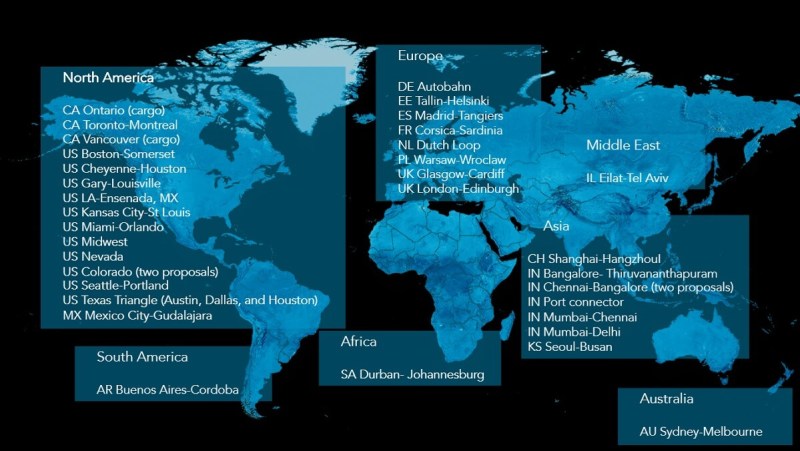 Above: The finalists in Hyperloop One’s contest to build Hyperloop transportation systems.

VB: I was sad that the Bay Area didn’t seem to be on the list. I’d expect a very built-out area like that —

Lloyd: All tunneled. I’d intuitively say it’d be all tunneled. It must have been a pretty good year in 2016. Nobody had the time to put that idea together. They might have thought we’re already doing it.

VB: Is there a feeling for what’s more ideal based on all these submissions?

Second, was there a realistic environment in which governments would be supportive, or would this take forever? To be part of this next phase, we’re looking for those that have government backers, that will try to move more quickly. The study we’re doing in Dubai with the transit authority, that’s a regulator working with us now, rather than trying to stop it down the road. They’re being very collaborative.

Finally, where could we imagine projects could be financed? This is all very interesting, but if you can’t create an economic model that would then be a project that could be financed, it’s not that interesting. Those three characteristics were part of everything. The entire company came together, including all of our employees from Nevada, and we analyzed these projects. We had engineers working with finance people and everyone else. We were very impressed by the quality of the submissions.

Above: Hyperloop One construction in Las Vegas

VB: Do you have any feel yet for how much one build-out will cost?

Lloyd: I told this to our team. I think in supporting and promoting the idea, we’ve probably spent less than $100,000. The viable pipeline of opportunities that have been submitted is in the tens of billions of dollars. That’s a pretty good ROI. That’s the value of the projects in aggregate. The value to Hyperloop would be a portion of that, as we continue to work on how our business would monetize the different projects moving forward.

VB: What’s the status of Las Vegas itself?

Lloyd: It’s great. We just had our cofounder and president, Josh Giegel, there this morning. He left at five. It’s very cold, by the way, in the desert that early. Great progress. We’ll be bringing together and doing a full-scale test within the next couple of months. Everything’s on track. The tube is there. You can see it from the highway. It’s pretty exciting. We have full facilities out there, pumps installed, generator power in. We’re getting ready for our Kitty Hawk.

The world is getting increasingly convinced that our company is set up to make this a reality. As we go from CES last year to this CES, it’s becoming more evident that this is going to be possible.

VB: How do you get past the initial reaction people have, that this is just science fiction?

Lloyd: You can show a picture or talk about it, but we think the only way to get past the reaction that this is science fiction is just to build it. That’s why our company has been so focused for two years on a single deliverable, a milestone that matters. Let’s demonstrate a full-scale Hyperloop. When people say, “It sounds phenomenal, but it’s too far off,” let’s show them Hyperloop. In the early part of this year we’ll show that the Hyperloop is real and we’re the company building it.

VB: What are some more steps on that road map, how a project is going to get built?

Lloyd: With some of the ones we’re going through right now, you do an engineering study. You do a revenue analysis. You do an engineering and construction feasibility. You determine whether there’s a right-of-way you can obtain, or whether you have to create a new one.

As a template, the project we’re doing with the road and transit authority in Dubai, the regulator, we’re going through that entire process with outside advisors and specialists to help them determine what would be the most impactful route in Dubai. We’re halfway through. Probably in a February time frame, we’ll come to a conclusion as to whether it makes sense. If it does make sense, the next step is a deeper level of specific engineering designs, so you can then ask people for a price to build it.

Above: Hyperloop One tubes in Las Vegas.

VB: How many people do you guys have now?

Lloyd: 225. 50 of them are in Nevada, which is pretty exciting for the state of Nevada. We’re growing very quickly. I’d expect that we’ll end up doubling this year to 500. We’re growing more facilities. You’re aware of the 100,000-square-foot manufacturing facility we have here in Vegas, and the test and safety site. We’re making very rapid progress.

We have employees starting to be out there around the world. We’ve hired people looking after our customer engagement, based in London and spending a lot of time in the Middle East and northern Europe. You saw the news on Brent Callinicos, our chief financial advisor, joining us in October. He’s very much part of the team that’s focused on our series C financing, which we expect in the first half of this year. We’ll be in the market raising a couple hundred million dollars.

VB: Do you have any lingering fallout from the lawsuit?

Lloyd: It’s funny you mentioned that. It’s the first time I’ve been asked about it today. But to me, that’s good. Our objective was to keep focused on progress, and I think where we are today — sitting one CES later from when we first showed up here and talked about Hyperloop — the progress has been amazing. We’re pleased that the company stayed focused and continued to deliver on our commitments to make Hyperloop real.