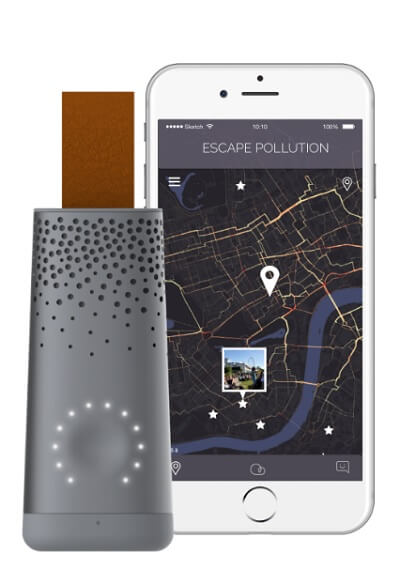 Above: Plume Labs’ app can build a map of where the air is the best in your city.

One Flow device can scan the quality of air in your home or around you. But a bunch of Flows spread across your city can eventually create a crowdsourced map that shows where the air quality is best. You could then route your way to work based on the best air quality along the way.

When you open the Flow app on a smartphone, you can see the air quality in your home and watch how it changes over time. But the Flow device is small and portable, so you can also take it with you to monitor your exposure to air pollution while you’re away from home.

And that can be important. Air pollutants from car exhaust cause more deaths in the U.S. every year than road casualties, according to a 2013 MIT study. But the technology industry hasn’t yet given consumers the tools to take control of their environmental health.

With Flow, users can finally track all major pollutants that cause harm to their health and act to avoid them with real-time updates from the app. Over the past two years, Plume Labs developed Flow’s sensing technologies and environmental AI in partnership with world-class environmental researchers, such as France’s CNRS-LISA and Imperial College London.

By wearing Flow on their bag, purse, bike or stroller as they go about their day, users can contribute to a live air map, reporting hotspots so other users can avoid pollution. Plume Labs partnered with global design and strategy firm frog. The two teams worked together in frog’s London studio, researching users’ needs for personalized air quality advice and testing their designs with the community of people who use the Plume Air Report, Plume’s flagship air quality forecasting app.

Romain Lacombe, CEO and cofounder of Plume Labs, said in a statement, “After two years of work, we’re very proud to introduce Flow and its potential to help people avoid air pollution. At a time when the dramatic health impact of unclean air is becoming ever more clear, we are confident that our product will help a wide community of users around the world enhance their environmental health, and help us all tackle the urban air pollution crisis.”