Roblox had more than 44 million monthly active users in December, and many of them are creating their own games for others to play in the Lego-like block world. Now the company is launching a line of toys based on characters from those user-generated games.

Toys are a risky business. But San Mateo, Calif.-based Roblox has a growing user base. It recently hit a peak of more than 1 million concurrent users. And those users have collectively put more than 300 million hours into the game. The top game creators on the platform are making more than $50,000 a month in revenue, and Roblox now runs across PCs, Xbox, phones, tablets, and VR. 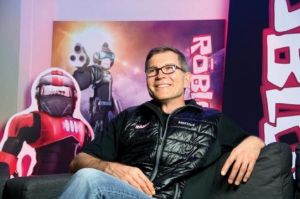 Roblox has teamed with toy maker Jazwares to create 40 different toys based on popular characters in Roblox user-generated games. The toys will debut at leading retailers in February. The new merchandise is Roblox’s first move to the offline world, and it coincides with a rebranding of the company and a launch of a new corporate website, said Dave Baszucki, the CEO of Roblox, in an interview with GamesBeat.

“We’re taking user-driven content principles of Roblox and moving them into the physical world,” said Baszucki. “We have 40 characters in the first wave, all of them created by our users. These are stories powered by the creativity of our community.”

The users can earn royalties based on the toy sales, as they do with game sales. With the launch of the new toys, Baszucki said, Roblox is seeking to “power imagination” in a way that is similar to how they inspire participants in their online platform to express their creativity.

Fans can take apart the characters in the physical toy line and mix and match parts to create new characters just like they can in Roblox’s virtual world. The imagination of users is also strongly reflected in the toy offerings, with a selection of playsets and characters based on the creations of some of the most popular community developers.

Additionally, each of the toys comes with a unique code that can be redeemed for exclusive virtual items. The Series 1 collection of toys will debut in February at top retailers across North America. The retail bundles include a Blister Box bundle of a bunch of characters, as well as a Blind Box, where the characters inside are a surprise.

This past year has been marked by big growth for Roblox. In 2016, the company launched on Xbox One and Oculus Rift. Roblox remains the top free download on Xbox One since it launched on the console early last year.

The full Roblox toy line will be showcased at Jazwares’ booth at this year’s Toy Fair taking place at the Jacob K. Javits Convention Center from Saturday, February 18 to Tuesday, February 21. Jazwares also makes toys for Minecraft, the big rival of Roblox, as well as other licensed products. Rivals in the toys-to-life category include Skylanders and Lego Dimensions.

The characters include Builder Man, one of the “iconic Roblox characters,” Baszucki said. The toy prices haven’t been set yet.