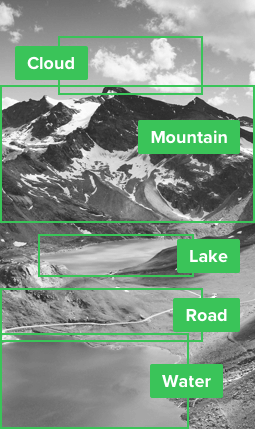 Above: Name that object.

Founded out of Seattle in 2014, Spare5 has hitherto partnered with big-name companies such as Microsoft, Pinterest, and IBM, among others, who provide the Spare5 community with “tasks” — these generally focus on identifying the meaning of media assets such as photos, videos, and audio. For example, someone may be presented with a picture of a landscape, and they would have to tell the system what the mountain is, and whether the large body of water it identified is a lake. It’s all about improving companies’ in-house AI efforts such as computer vision and natural-language processing.

Moving forward, the company will be known as Mighty AI, and in addition to the funding round, it has signed deals with Intel and Accenture. Both companies will work on behalf of Mighty AI to sell and promote its so-called “training data as a service” (TDaaS) offering to their own customers around the world.

Prior to now, Mighty AI had raised around $13 million in funding, and with its latest cash injection it will push to grow its TDaaS platform and network of individuals who carry out the microtasks, according to a company statement. It will also bolster its in-house team of data scientists, engineers, and sales specialists.

AI is increasingly touching on just about every facet of society, from the workplace to customer service and everywhere in between. While AI systems are becoming more intelligent and “aware,” they’re not quite at the stage of being able to teach themselves — there are things that only humans are able to decipher and detect. And this is what Mighty AI is promising companies: human input that’s tailored to suit whatever AI system they’re looking to build.

“In the future, we will count on AI to make every aspect of our lives better,” said Mighty AI CEO and founder Matt Bencke. “AI will manage our information, schedules and energy use. It will make our factories, roads and homes safer and more efficient. It will provide us each with a personal shopper and investment advisor. But, for AI models to do all this and more, they need to understand what and how we think. Mighty AI is the critical link between computer and human cognition, putting the right humans in the right learning loops.”