Facebook on Wednesday began rolling out new features for its live video offering that should give publishers additional flexibility in how they produce content for the social network. Perhaps the most important one, which content creators may find interesting, is the fact you’ll be able to livestream right from your web browser (if you’re a publisher) in addition to your mobile device.

Other updates being released include a new Page role called “Live Contributor” that can be assigned to non-administrators who have to go live on behalf of a branded page. There are also video insights being released for select profiles, a pinning option for live comments, video permalinks, and the ability to crosspost previously live videos.

The latest changes are designed to, in Facebook’s words, “give publishers more control, customization, and flexibility over their broadcasts.” Until today, many publishers had been limited to livestreaming through a mobile device or perhaps a third-party service if you have the technical resources. For those who want additional variety for videos, such as daily vlogs, simply being in front of a laptop or webcam is all they really need. But Facebook Live has not really supported the web — until now. There’s no timeline on when this will be available to everyone, but it’s rolling out now.

Above: Example of a Live Contributor role on a Facebook Page.

For those who broadcast through Pages, one issue is entrusting content creators with being administrators. In some cases, this may not be appropriate, which is why Facebook is implementing a new role called “Live Contributor” that allows administrators to designate specific people who are tasked with going live from the Page. “This gives contributors the flexibility to stream great live content from a mobile device on behalf of a Page whenever it happens, while allowing the Page admin to maintain security and control over their Page,” Facebook wrote in a blog post.

To show individuals the power of its platform, Facebook is also rolling out video insights to give celebrities, personalities, journalists, politicians, and influencers a better understanding of their broadcast impact. This analytics offering is available to profiles with 5,000 or more followers and shows total minutes viewed, total number of views, and engagement such as reactions, comments, and shares. It’ll also display aggregate information over 7, 30, and 60-day periods. Facebook said this will be available through its Mentions app in a matter of weeks. 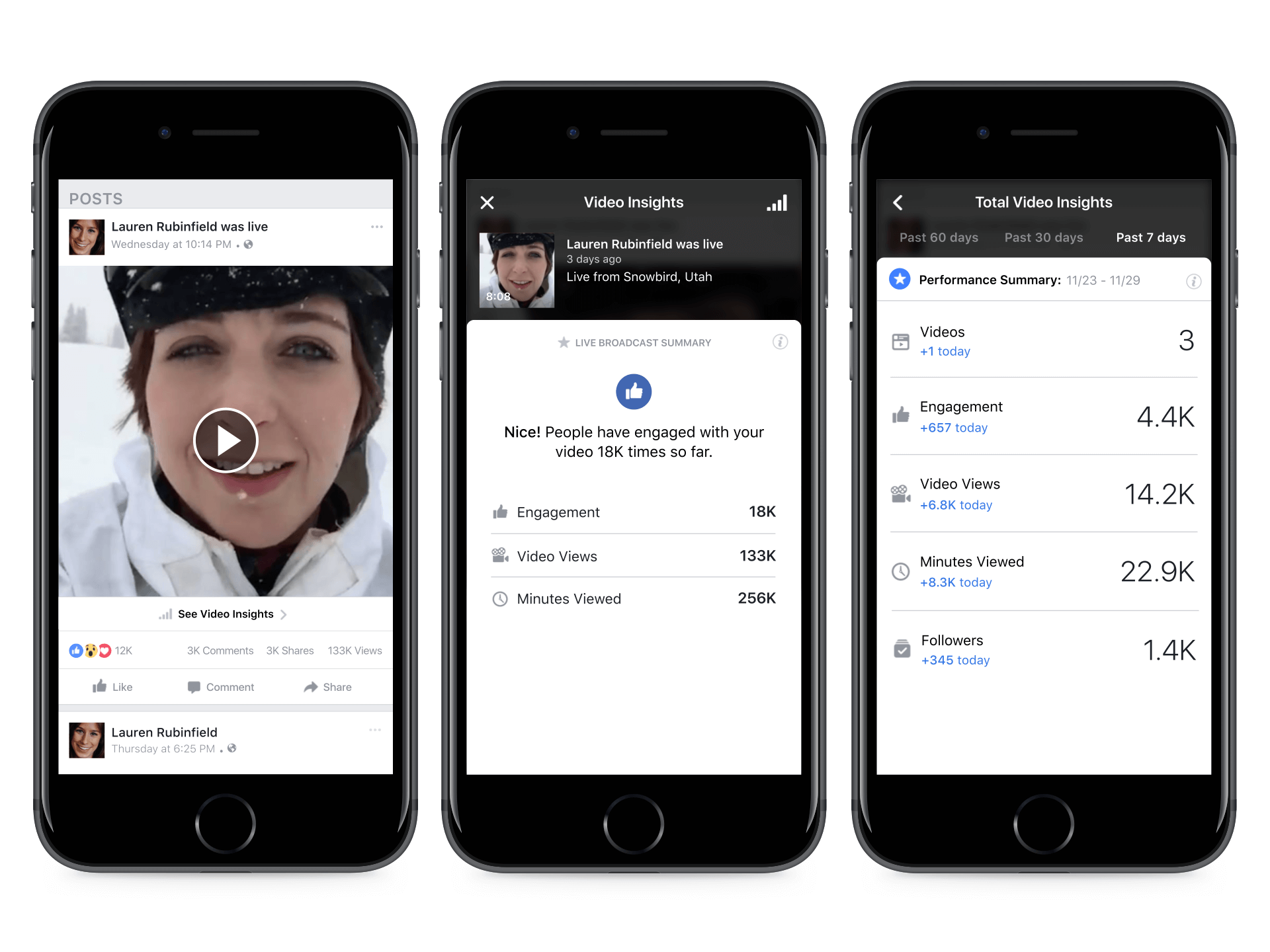 Above: Facebook now shows lightweight video insights for profiles with more than 5,000 followers.

Additionally, if you find yourself with a comment you want to highlight, you can now pin that to your video. The way that Facebook frames it, some receive the same comment numerous times, so by pinning it, broadcasters can let everyone know that it’s been said already and to come up with something original.

Should you want to share your live video, Facebook has added permalinks as a quick way to reference the broadcast. Accessible through “facebook.com/pagename/videos,” it’ll show a live video if one is currently underway or just show you a library of the Page’s collection of videos. And speaking of videos, Facebook is allowing publishers crosspost their no-longer-live videos. Previously there were only ways to crosspost them to different Pages if it was a live broadcast, but now you can do it with multiple recorded videos simultaneously.

All of these features are now rolling out today, so Page admins should start to see them in the coming weeks.