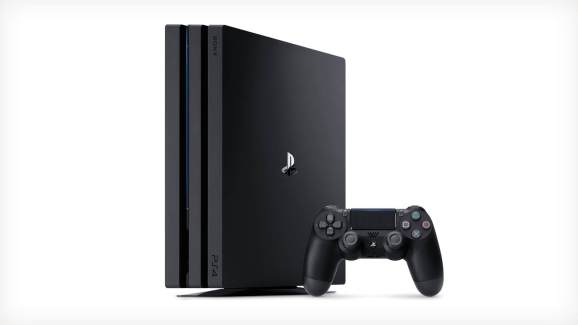 The PlayStation 4 Pro in its vertical stance.

Sony had another huge month to end the year.

PlayStation 4 was the best-selling home gaming system in United States, according to data from industry-tracking firm The NPD Group. Sony declined to comment on the sales, but the company did confirm the NPD data to GamesBeat. At the same time, Microsoft highlighted that December was also huge for its gaming division. The Xbox company also pointed out that PS4 sales slid year-over-year, and that Xbox One actually outsold Sony’s system in the second half of 2016. So while PS4 outperformed Xbox One in the last two months of the year, which are crucial to overall sales, the systems are a bit closer than they were in 2014 and 2015. Beyond the competition, however, the console gaming industry continues to contribute healthy revenues to the $99.6 billion gaming industry.

Sony’s system likely got a boost in December from the launch of a handful of major games that were either exclusive to PS4 or have a larger fan base on that platform. The Last Guardian, a puzzle platformer from Sony’s internal studios, launched that month after nearly a decade of development and delays. Final Fantasy XV also debuted in December, and that game, while also available on Xbox One, sold far better on PS4.

But Microsoft doesn’t seem defeated, and the company even posted a statement that threw some shade at Sony’s PlayStation 4.

“December was the biggest month ever for Xbox One sales in the U.S., and Xbox One was the only [current-generation] console with year-over-year growth, according to NPD,” a Microsoft spokesperson said. “In addition, Xbox One was the top-selling console over the second half of 2016, following the announcement of Xbox One S at E3.”