Hearthstone could be seeing some big changes, we learned, as two of its most important developers talked to players on Twitch today.

Game director Ben Brode and game designer Dean Ayala answered questions from fans during a Q&A livestream for the leading digital card game. This comes after the Mean Streets of Gadgetzan expansion launched in early December. The set’s new cards have created new decks and strategies. Some fans are concerned about some cards being too powerful (hello, Patches), while others want to see some updates to the Arena mode, which has players compete with decks they draft from random card choices.

These streams give Hearthstone’s developers a chance to talk to the community and address those concerns directly. More communication is something that Hearthstone players have asked for, so this help Blizzard make their fans happy while listening to their questions.

The ‘new player experience’ and Ranked

Brode started by talking about the “new player experience.” Right not, competing in Hearthstone’s Ranked mode requires strong decks, and it can be hard for new players to earn or buy all of the cards they need to make them. Brode noted that the team has worked to make the Casual mode better, having it match new players exclusively with other new players. In Ranked, matchmaking is determined by your rank that month. He noted that new players have seen their win rates increase by 15 percent over the last two years in Casual mode.

But he said that the new player experience in Ranked has the most room for improvement. Brode noted that Ranked can feel like a grind since it resets every month. The team is looking at making Ranked better first by trying to improve it with small adjustments that don’t change the system. Blizzard is thinking of increasing the number of bonus stars (you earn these by winning, which increase your rank, and you can earn bonus stars when you’re on a win streak of three or more games) players earn. 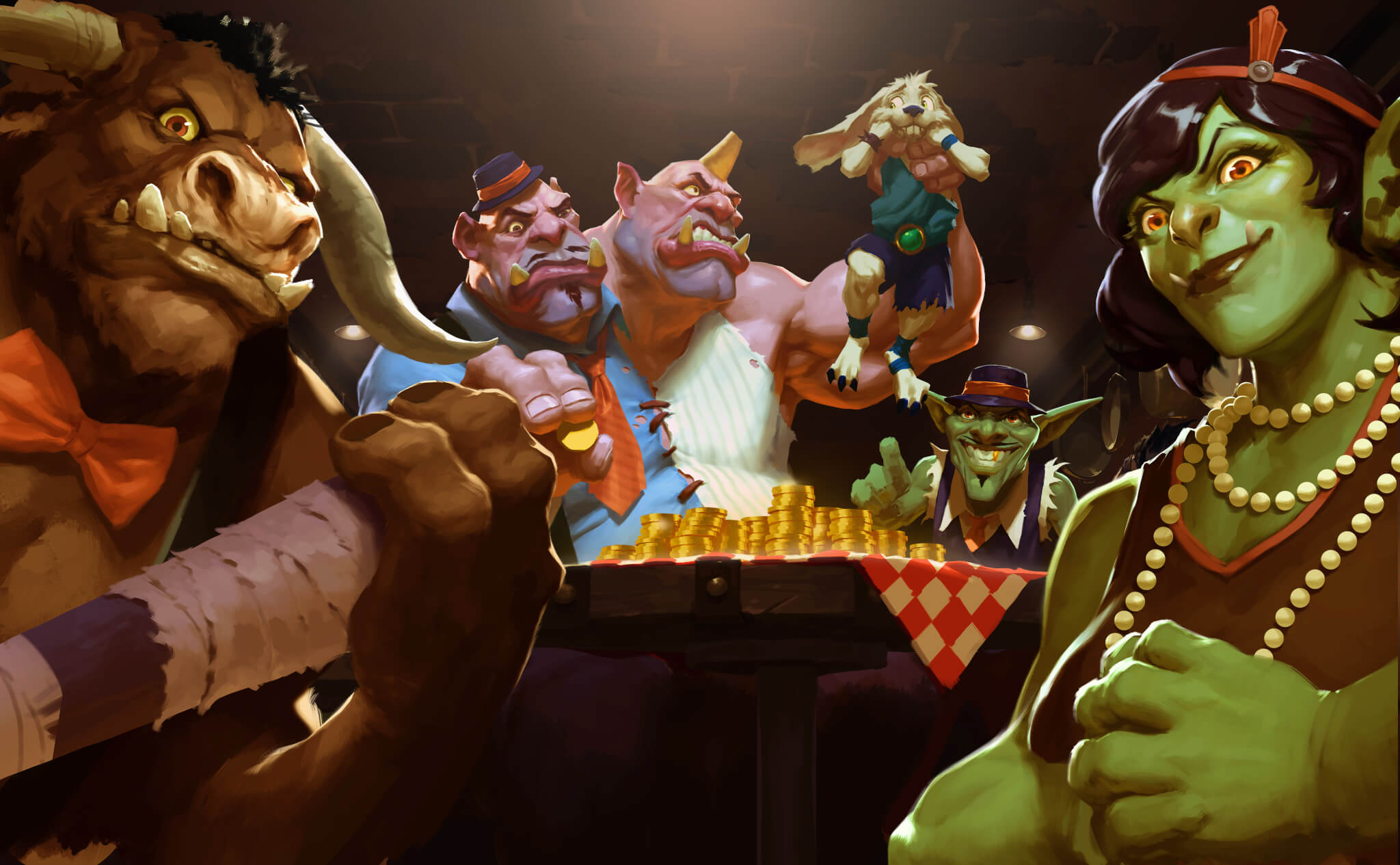 Above: The Grimy Goons gang is a faction with hunter, paladin and warrior cards in Hearthstone’s Mean Streets of Gadgetzan expansion.

Blizzard is also looking at adding break points, which means adding certain places on the Ranked ladder that you can’t drop from. For example, once you hit Rank 10, you can’t go back to Rank 11 no matter how much you lose. The win streak bonus ends at Rank 5. Brode noted that they want players to earn their way to Legendary, but they will consider putting bonuses in those final ranks if it will make the ladder climb feel like less of a grind. If smaller changes don’t improve the experience, Blizzard will then look at a larger revamp of the system.

Ayala then talked about Arena. The team is looking at improving its progression and matchmaking in the long-term, while they’re considering smaller changes for the near future. Blizzard might switch Arena from the Wild to the Standard format, where you pick cards in a random draft and assemble a deck. They also want to do a better job of balancing the cards you pick from. Right now, you pick one of three cards of the same rarity. Rarity, however, is often not a good indicator of a card’s quality. Blizzard also wants to start posting the top Arena players monthly, similar to what it does for Standard. Blizzard also wants to reduce the amount of neutral, Classic minions that show up in the drafting phase.

Brode noted that changes will come soon, with Blizzard testing many of these Arena changes.

“We hope we’re making good decisions,” Brode said about Arena. “But we’re going to put it out there and see how it feels.”

Moving classic cards out of Standard

Brode then addressed a question regarding the possibility of moving classic cards to Wild. Unlike Standard, Wild lets players use any cards from any set. All expansions will eventually exit Standard, but the original cards that launched with Hearthstone will always be allowed. However, to make sure that some of these cards would be future-proof, Blizzard nerfed many of them. Brode noted that, alternatively, Blizzard could have just moved those cards to Wild.

The nerf behind Molten Giant caused the most drama. It used to be a 20 mana 8/8 minion that would be 1 mana cheaper for each damage your hero had taken. Blizzard increased its starting cost to 25 mana. This made the card dramatically worse, resulting in it seeing little to no play in Standard. Some would have been happier if Molten Giant had just moved to Wild so they could still make decks around the older version of it. Brode didn’t say no to yes on what they would do in the future, just noting that it is a difficult discussion.

The state of Standard and Wild

Ayala then talked about the meta for Standard, meaning the popularity of decks. Right now, Pirate and Reno decks are doing the best, while Hunter and Paladin struggle to compete. He noted that while Pirate decks were overrunning Standard for a bit, the numbers have stabilized. However, there are still more of them than Blizzard is comfortable with, and it may address the archetype.

“We’re not as happy as we could with the population of decks with the Pirate package,” Ayala said. “We’re looking at it closely.”

Ayala defended Paladin, saying that some are doing well and that the class could still find success in the Gadgetzan meta. He also noted that the hand-buffing mechanic for Hunter, Paladin, and Warrior has more longevity than the Jade and Reno decks that rose in popularity. He confirmed that Hunter and Paladin are seeing a low amount of play, but that they should become more popular if Pirates fall off (either naturally or from intervention from Blizzard). 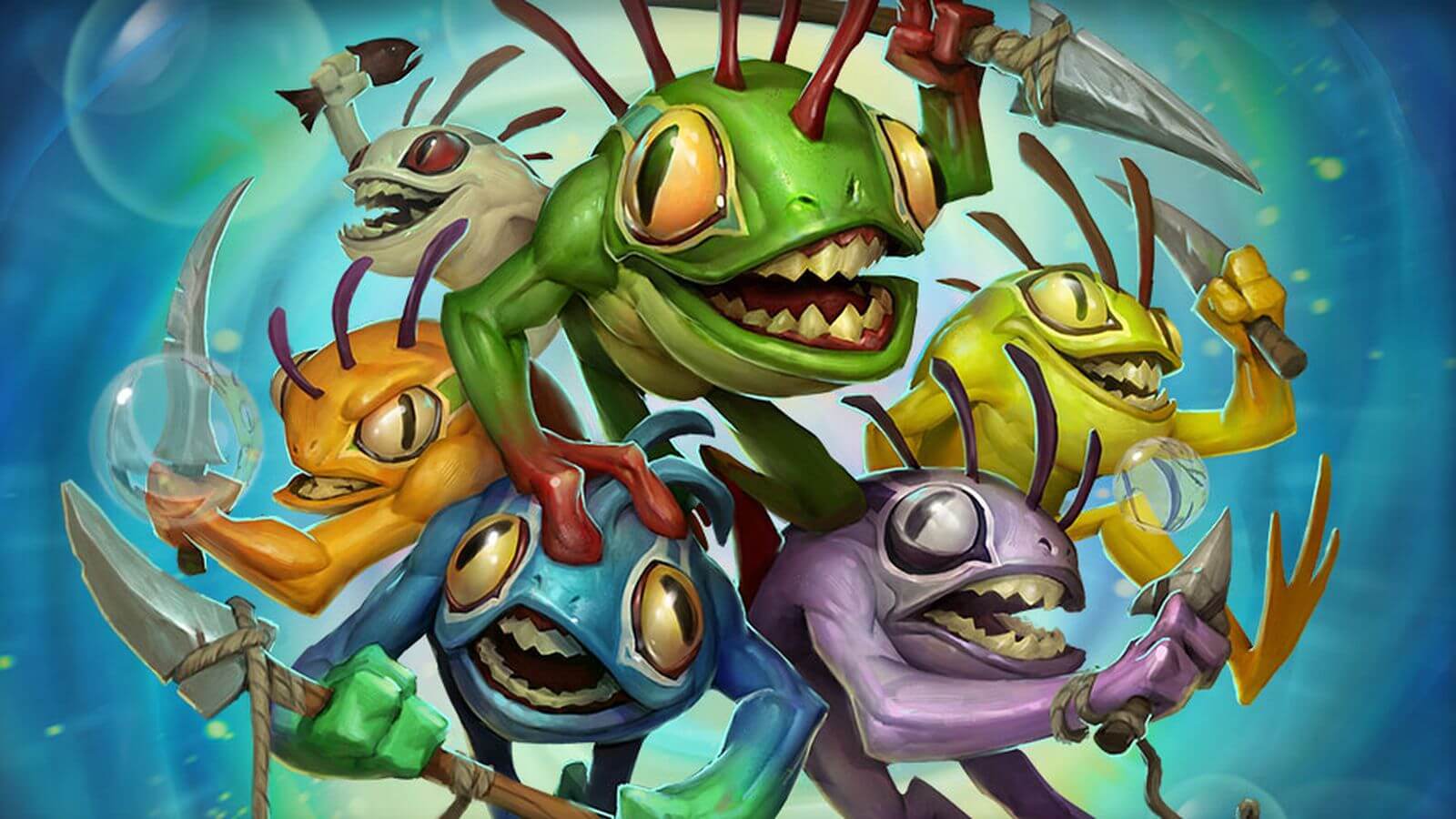 He also talked about class goals for Paladin. Blizzard envisions it as a class that’s good at healing and can summon small 1/1 minions with its Hero power or other cards. They also have more cards that make minions stronger (buffs) than the other classes. Blizzard believes that once Reno Jackson leaves Standard, Paladin will become stronger since it will once again have an advantage at healing.

Brode then talked about reprinting cards, which means taking Wild cards and bringing them back with a new set, noting that Blizzard hasn’t talked much about the idea. He noted that the Standard format is too new at the moment for reprints. Brode also noted that Team 5, the group inside Blizzard that works on Hearthstone, has 70 members. He noted that they team has been doubling in size every year since the game launched in 2014.

They then described what they would define as a healthy meta. He noted that few decks in the history of the game have ever hit more than a 55 percent win rate. Instead, the problem comes when too many people are playing the same decks, sometimes with 20 to 25 percent of users running the same thing. That is the problem they want to avoid. Ideally, the meta will shift naturally. Like with Pirate Decks, fewer people played them once others were using decks with cards like Doomsayer and Acidic Swamp Ooze.

As for the Wild format, Brode remarked that it will become more interesting when the next Standard cycle happens after the next expansions launches. Right now, Wild only has two sets more than Standard, but the number of its exclusive cards will increase. He noted that he had hoped to see more Wild tournaments and events, but thinks that there will be more of them after the rotation.