Nintendo announced its pricing ($300) and launch date (March 3) for the Nintendo Switch hybrid home game console and portable last night. We contacted some game analysts to get their reaction to it.

Nintendo hasn’t released every detail yet, particularly about the inner workings of the Switch. But the events last night and this morning have given analyst plenty to talk about. Analysts believe it won’t be hard to outsell the Wii U, but they have mixed reactions about the trade-offs in the hybrid portable-home-console device. Here’s some comments from analysts about the Switch:

Nintendo’s Switch will erase the painful memories of the Wii U but also faces its own challenges.

Nintendo’s new hybrid console Switch reflects a company that is in cultural flux as it seeks to find a balance of approach between its traditional console games business and to cater for a new population of smart device gamers. The Switch’s form factor literally embodies the tensions at play here as it seeks to satisfy traditional Nintendo console gamers and also engage a new set of consumers that routinely want to use smart devices — and more specifically tablets — for gaming. A hybrid device strategy such as this is unproven in the market — previous gaming tablets that can dock to TVs have found very little sales traction but significantly have not had the backing of a company such as Nintendo.

Is this a device for the mobile gamer that plays on the move? To a segment of the mobile gamer population yes, but the Switch is more naturally a direct challenge to the use of tablets in the home or perhaps on family holidays.

As such, Switch will need to provide a compelling alternative or enhancement to other tablets already used by this audience. Nintendo is seeking to do this in a number of ways. Through its exclusive games IP, through its local multiplayer gaming capabilities over local Wi-Fi and through the sensor technology included in the proprietary Joy-Con controllers which allows it to bring new gaming experiences to the tablet gaming audience.

IHS Markit expects this differentiation to resonate with a broader set of buyers compared to the Wii U, but Nintendo faces the challenge of communicating these relatively complex product features to a more mainstream audience, an area the company has openly agreed it failed with in relation to the Wii U.

At $299.99 and £279 in the U.K. including VAT, the pricing of the Switch is as predicted. This is not an impulse purchase or as cheap as other recent Nintendo consoles and at this price point Nintendo will be competing with existing consoles and tablets. As a result, communicating the unique aspects of the Switch — particularly the capabilities of the Joy-Con controllers — and its exclusive content through marketing spend will be key to gaining market traction. Unlike the Wii, this is not a product that will necessarily sell itself through word of mouth as its proposition is still relatively complex.

And this is where Nintendo’s broader app strategy is expected to help the company. We’ve already seen how the success of Pokémon Go has translated into sales of 3DS hardware and software. Nintendo will be hoping it can build similar momentum for the Switch with its app release strategy – the success of this approach will depend largely on the content and franchises involved.

Nintendo’s decision to offer a paid online service brings it into line with both Microsoft and Sony and makes complete strategic sense. IHS Markit estimates that global consumer spending on Xbox Live and PlayStation Plus reached $2.7 billion in 2016. This revenue stream is essential for supporting the online services of these competitors and has allowed Sony and Microsoft to build a comprehensive lead in online capabilities compared to Nintendo. With this new flow of income, Nintendo investment in its online capabilities will increase significantly.

Outselling the Wii U:

IHS Markit expects Switch to comfortably outsell the Wii U, but Nintendo faces an uphill task to translate its product vision into mainstream adoption although it will be aided in this ambition through its deep portfolio of games franchises. The Switch is an evolution of the Wii U, but eminently simpler in form factor and broadens the use case for a home and portable console hybrid. As a result Nintendo’s Switch is likely to banish the painful memories of the poorly selling Wii U, which to date has only sold 13.4 million units since its launch in 2012. We currently forecast 4 million Switch sales in 2017 although this may be revised in the coming days based on the earlier than expected launch date and likely stock availability through the year. 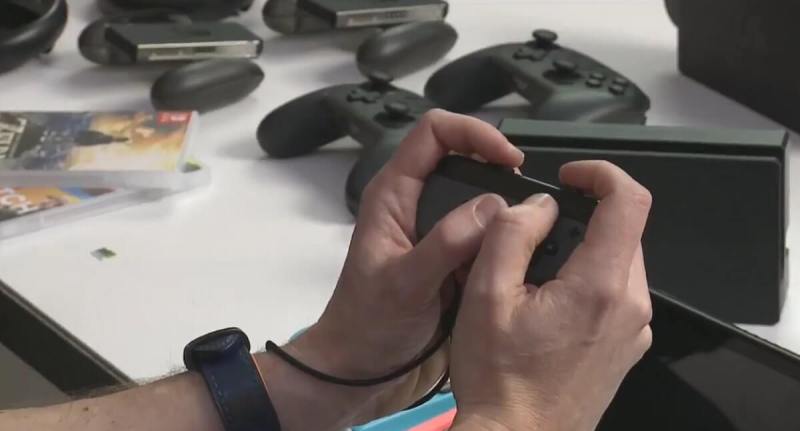 Zelda [is a] huge favorite, but also saw Activision [with] Skylanders and Has Been Heroes from GameTrust (GameStop). Promising initial line-up. Arms is the most innovative title showcasing the Switch capabilities.

Access to Nintendo’s classic titles via the online service will prove to be a key differentiator. Even as Nintendo continues to innovate on its existing titles, for many consumers the classic titles remain an important selling point. Providing access to this library of games will help drive adoption to the paid online service for the Switch. By comparison, the combined earnings for the subscription service for Sony and Xbox — PlayStation Network and Xbox Live, respectively — generated around $3 billion in revenues last year, and has proven a key component in transitioning consumers to the higher-margin side of the business in digital distribution. Total earnings for digital downloads on console last year, including full game downloads and microtransactions, was $7 billion worldwide.

Nintendo is de-emphasizing physical cartridge sales. The cartridge system for the Switch is based on the 3DS more so than the Wii U, suggesting that digital distribution will play a bigger role for the upcoming platform. Consumer generally find it is easier to expand the memory and download titles directly to the device than having to carry all of their games separately. The challenge here for Nintendo centers on providing a seamless experience in its eShop.

The emphasis on gaming consoles as a toy is a smart, and proven, strategic move. While we don’t anticipate games like 1-2-Switch to become breakout sellers in comparison to the announced Mario and Zelda titles, they do a great job differentiating the Nintendo device from other consoles. It continues the company’s legacy as a toy-maker and shows Nintendo’s strength in providing innovative game play that integrates both hardware and software.

I think that Nintendo priced it very fairly, think that when you consider the complexity of the Joy-Cons and the fact that this is a tablet and a dock it doesn’t really seem unreasonable at all. I do think the price for replacement Joy-Con is a bit high but they are very complicated little controllers. Overall, I think that Nintendo fans will be happy with the price and it won’t be restrictive for people that aren’t Nintendo fanboys like me.

On features, I found myself the most impressed with the capability and versatility of the joycons. I believe these controllers are going to be the big differentiating factor and allow for the most innovative gameplay. I also found the different modes of play to be very interesting and catering to the switch’s strengths.

As for impressions, I think that Nintendo did a very good job with the Switch and that it does a lot of things that people expected and some things they didn’t expect. I believe that it does a good job of blending together many different types of play that Nintendo has introduced over the years with different consoles. I think the biggest problem for Nintendo will be balancing the paid and unpaid experiences when it comes to multiplayer. They will also have to defend their decision to offer a pair service with added value propositions or genuinely unique experiences otherwise impossible without a paid service.

What most impressed me about the details put forward [last night] on Switch is the local 8-way play, but the Joy-Con controllers appear to be their focus and the Switch’s winning feature. It’s a handheld bar of fun packed with way too many cool sensors and functions, such as the HD rumble, and it will be really disappointing if game developers don’t take advantage of the unique style of gameplay it enables. 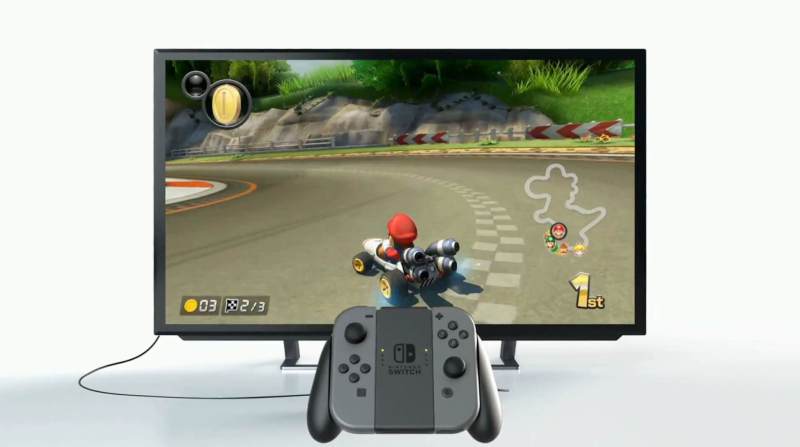 Above: The Nintendo Switch console.

With portable and stationary modes, local and remote multiplayer and enhanced mtion and precision controls, Nintendo Switch brings a new category into console gaming. I think Switch will do very well with Zelda at launch.

The price point is a little high considering previous Nintendo hardware pricing but there is value and quality in the base product with the controllers, dock, etc. For a launch MSRP $299, it should be fine. With an included game or games as supply begins to meet demand, Nintendo should be able to keep Switch at that price point longer.

If Nintendo can keep the pipeline stoked to release a steady stream of quality first-party titles, including the anticipated franchises, Switch could do as well as 3DS and other Nintendo portables, perhaps better with a large installed base and ahigh attach rate. That the system also provides console style gaming is a great differentiator. Switch’s control system is versatile, broadening the motion control of Wii. The most impressive aspect of Switch is its multimodal use — portable and also console style gaming allows for game use in multiple contexts including local and online multiplayer.

My biggest concern is the price: $299 without a game is on the high end of expectations. There has been some hope that the games would be moderately priced (somewhere between 3DS and Wii U game prices), but that’s not the case.

Add to this the very expensive accessories, and you have one high barrier to overcome for mainstream users.

A second point of concern is that the launch lineup overall is weak, except for Zelda.

On the plus side, Nintendo could be launching Switch with a true system seller: the Zelda game looks amazing and could move units on its own.

The Joy-Cons could be confusing to mainstream users (as opposed to the Wiimote), but Nintendo tried to innovate and seems to have integrated some magic there.

It’s also good to see that with 1-2 Switch, Nintendo tries to address people who usually don’t play games, a formula that worked incredibly well with the Wii. They need more of those.

Nintendo also spreads out the games in a more clever way, with Zelda being available at launch and soon followed by Mario in April, Splatoon 2 in the summer and Mario during the holidays. I am still worried what will happen after that and about the third-party support: just Nintendo games aren’t enough.