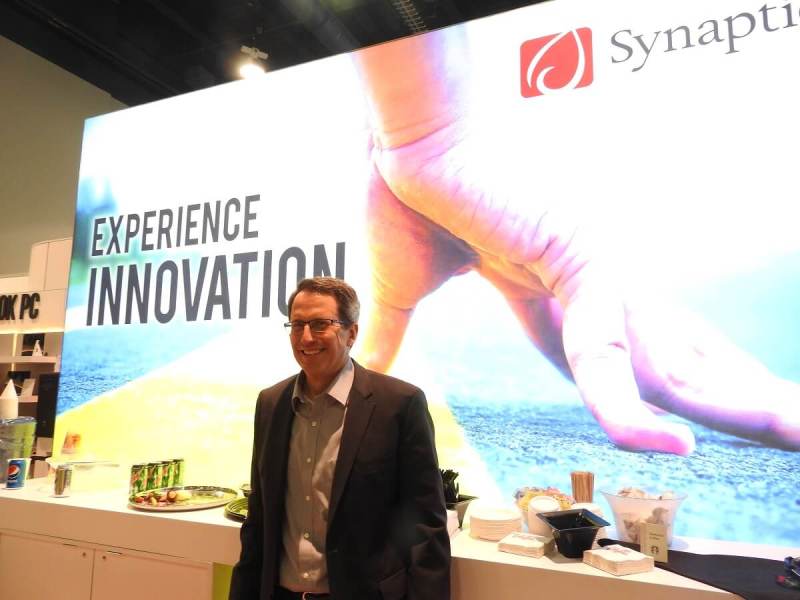 Above: Rick Bergman, CEO of Synaptics.

VB: The one app where you had writing was interesting. You could write lightly or heavily depending on the amount of force applied.

Bergman: It’s a third dimension. We’re working on the force side and have solutions for that. It’s very natural. As you say, the home button kind of evolved. I’m not sure it’s a natural thing, if you start from a blank sheet of paper. Force is very natural. At the beginning of the phone revolution, if we’d had force, that probably would have taken away from double-clicking or having to linger. It’s just a much more natural thing to do. But it’ll take a while to convert people.

VB: Do you feel like you fit in the universe of user interface visionaries?

Bergman: It’s the way the company was born. We continue to look for opportunities to expand in that. We’re somewhat unique as a U.S. company now, because we supply components into smartphones. A couple of other guys do that, but in the human interface area we kind of stand alone. We don’t have any other companies very much like us.

VB: Would you say you’re in a domain, though, like touch-oriented technologies, or a larger user interface area?

Bergman: We’d like to be in that larger human interface area. Touch is where we’ve made hay. Display drivers is the first place we stepped beyond. We continue to look at other areas — voice, audio, motion.

VB: It seems like voice is getting traction, especially at this CES. Google Assistant, Amazon Alexa, that’s all getting integrated into things like Nvidia’s Shield set-top box. It seems to make a lot of products better or easier to use. Where do you see voice control fitting in with the rest of the user interface?

Bergman: It’s a great complement. I have an Amazon product. It’s great to use it as a timer, to get the weather or whatever. I don’t have to type anything. The whole home thing is going to take off over the next few years, I think, whether it’s adding voice or adding displays. All those things are going to enhance the home experience.

VB: I did an interview with the science advisor for Minority Report. He designed the computer interface for that movie, with all that sort of drawing in the air. He has this conference room thing, where he took the movie’s idea and turned it into an enterprise product. Now you can have three or four displays in a room and move documents or images around them like this. It seems like gestures have their place in the user interface world, as well.

Bergman: They do, although there are limitations. People don’t like to keep their hands in the air. They get tired doing this. It looks cool. There was at one point a lot of talk about doing that on a notebook. It didn’t really go anywhere. Even doing touch across the keyboard was tiring. Back to what you were saying, people want the haptic feedback of an actual keyboard. They don’t want to just do it in the air.

VB: Some of this is a science of understanding people, then — what they want to do and what they won’t put up with.

Bergman: At Synaptics, back to your earlier question, we see ourselves as a human interface company. We have a human interface team, dedicated researchers that just look into some of the stuff you were just talking about. Is it going to be adopted by end users? That’s a question we ask ourselves, or that we sometimes get from OEMs, when we decide to do things like force or not do other things. At one point we were considering 3D gestures as a replacement for touch pads. We found that it was just inadequate.

VB: One thing I tend to notice about a lot of products, there’s the stuff that most users would remember to use, and then there’s the stuff that power users enjoy and remember. I can remember to do some kinds of taps on my touch pad, but two fingers or three fingers or four fingers, I don’t remember any of that stuff. Is that often the case? Designing for one group, a large group, but also a more hardcore group?

Bergman: What we’ve found is that it’s really tough to train people. Anything you can do that doesn’t require training is good. For example, for a while people would include the hover feature on your phone. That just required too much relearning. Force is a good example, like I was saying earlier, where it’s a really natural experience. That seems to stick more than things like enhanced gestures. Intuitively you can say that will save people a lot of time bringing up a new web page or whatever, but it’s tough to train them to do that.

Bergman: If you’d come here maybe three years ago, we had a demo with Tobii. If you have a notebook and a touch pad, it’s a very natural extension. If you look at the corner of the screen, you want the cursor to go there, usually. If you train yourself it works really well. But it was just too creepy for people, and it was a little expensive to implement, as well. It never really went anywhere.

VB: The one use that seemed interesting was where it would really speed you up doing a task. Targeting three zombies instead of just one, that sort of thing. You’d look at each one and then blast them.

Bergman: The one that seemed to stick when we had their demo was if you have a lot of pictures. If you looked at one, the picture would immediate explode out on you. Or if you were looking at a fairly dense web page and started to glance at details, it would automatically expand what you were looking at. It’s very cool stuff. 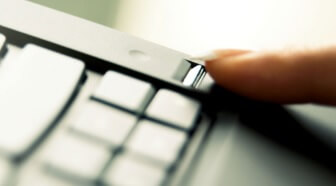 Above: Synaptics is doing fingerprint identification on laptops and other devices.

VB: Do you think that will be very common in VR?

Bergman: Oh, yeah. It has to be. VR will never take off unless they figure out eye tracking. That’s why people get nauseous, because you have that lag. If you’re tracking someone’s head movements, you’re already too late. You need to move with the eyes. You’ll see eye tracking in all the AR and VR sets going forward. It’s probably why Facebook acquired Eye Tribe, another eye tracking company, just this last week.

VB: For you guys, is all this we’ve talked about a very large space, a large possibility space?

Bergman: Definitely. We’re happy to be in the human interface space, because there are so many possibilities. The challenge is finding the right ones to invest in. We’re in a tough market as far as continuing to stay competitive and grow our share in display drivers, fingerprint, all these other areas.

VB: Right now it looks like there’s a different company for every kind of expertise. Eyes are just one set of companies. Fingers are another.

Bergman: You’re right. But not too many of them are commercially successful. That’s the other challenge. Lots of great ideas, but not a lot of volume right now. Even on the voice side, we’re starting to get some interesting volumes, but compared to PCs or phones, there’s still a long way to go. You want mass market adoption. The key is to be in front, but not too far in front.