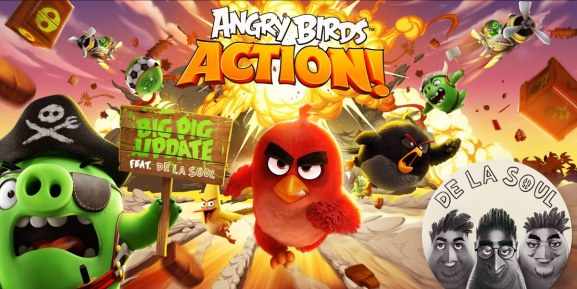 Rovio, the maker of Angry Birds, has opened a new game studio in London with a focus on mobile massively multiplayer online games (MMOs).

The move strengthens the Espoo, Finland-based company to expand its in-house development capacity. It will focus on new intellectual properties that go beyond the Angry Birds universe, which is about eight years old now.

Rovio’s Angry Birds movie debuted in 2016 and generated more than $350 million in revenues worldwide. And the company’s Angry Birds games have been downloaded three billion times since 2009. The company has had more than 500 million additional downloads of other games, but Rovio clearly needs to diversify and come up with more hits.

“Our business is profitably growing, and the time has come for us to grow in numbers too,” says Antti Viitanen, senior vice president of studios, in a statement. “London is the most logical place for us to found a new studio that will complement our overall global mix of internal and external developers. London is also a fantastically diverse talent magnet that has already paid Rovio dividends, as our local consumer products team that is based there has shown.”

The London studio joins four other Rovio in-house studios, which includes three in Finland and one in Stockholm, Sweden. Rovio also works with a number of external studios.

“We believe that the best game experiences are those that you share with other people,” adds Mark Sorrell, head of studio, in a statement. “So we’re starting a studio to do exactly this. We look forward to bringing a diverse team together to deliver unique MMOs that are creative, inclusive, and delightful.”

Over the next two years, Rovio London will be building a collaborative team of some 20 members. In the first year, it is targeting hiring eight people. Rovio is making the announcement at the Pocket Gamer Connects event in London.

Asked whether Brexit, or the United Kingdom’s vote to exit the European Union, made any difference, Sorrell said in an email, “As we expand our development studio presence out of the Nordics, London seemed the logical choice. The breadth and depth of talent in London is incredible; its position as a world cultural [center] is unquestionable; and we don’t see Brexit significantly changing either of those things. We already have premises here thanks to our consumer products team, so it really was the obvious choice.”