The Internet of Things is expected to grow quickly to tens of billions of connected devices, from smart refrigerators to smart showers to smart cruise ships.

But at some point, the wireless data networks won’t be able to handle all that traffic from the connected devices. That’s why tech companies want to upgrade to 5G wireless, which is a fifth-generation mobile network that can transmit data at gigabits per second, compared to the single-digit megabits per second that we get today on our smartphones.

And Intel wants to be a big player in this 5G business. Rob Topol is general manager of Intel’s 5G business and technology. I talked to him at CES 2017, where Intel introduced its first 5G modem chip. This kind of chip will enable tons of connected devices — connected cars, drones, robots, collaborative augmented reality glasses — to transfer data at fast speeds in the future.

Topol and I talked about whether 5G is really going to speed things up, or if the added traffic will just bog our networks down. Here’s an edited transcript of our interview. 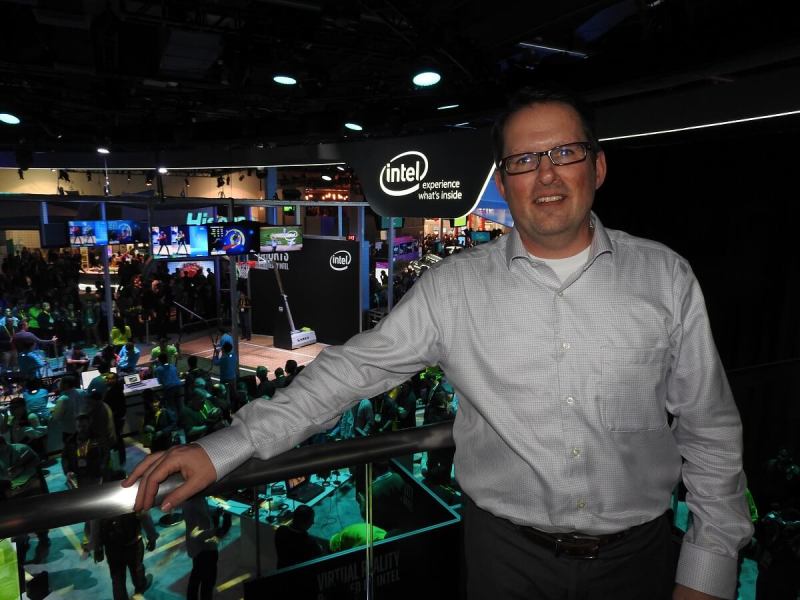 VentureBeat: How long have you been in this particular position?

Rob Topol: I’ve been in this position just the past couple of years. I’ve spent 17 years at Intel. I started in manufacturing, moved through SOC design, up into wireless the past several years. As we’ve started to form our 5G business activities — this is a fairly new position, managing 5G business and technology. My role is to work on the device side to ensure any of the prototypes, test beds, use case work we do is enabling all the verticals we have planned for 5G.

This isn’t just about a handset. In fact, we frequently say that 5G is the post-smartphone era. It’ll be more about the other businesses than it’s about handsets. Handsets will just be a part of it. There will be drones, connected homes, collaborative AR, other use cases that not only need but will benefit from 5G. My job is to make sure the prototypes are there, that we have the right test beds and partnerships in place to build this.

VB: You had an announcement a couple of days ago.

Topol: We had essentially two related to 5G. For the past year, we’ve built mobile trial platforms. We built 5G prototypes that we demonstrated a year ago at Mobile World Congress. You can start to utilize three, four, five gigabits per second in data rate and test different use cases with that.

What we announced here at CES, one thing is the Intel Go platform, an end-to-end solution for working with automotive OEMs on autonomous driving. We put a 5G FPGA-based modem in that platform that can now test any sort of — wherever there’s 5G spectrum available, you can test those use cases using upwards of seven gigabits per second. Whether it’s HD map downloads or over-the-air updates to the car or media content, whatever use cases, it’s ready next month for use in cars to develop that.

The second announcement was our first-generation global 5G modem. Taking what we’re building in FPGA prototypes, putting it into an ASIC with a transceiver and a base band modem. What I was showing just a minute ago, this is the transceiver we announced. This supports both sub-six-Ghz and millimeter-wave frequencies. The transceiver is ready now, as well as our millimeter-wave antenna arrays. 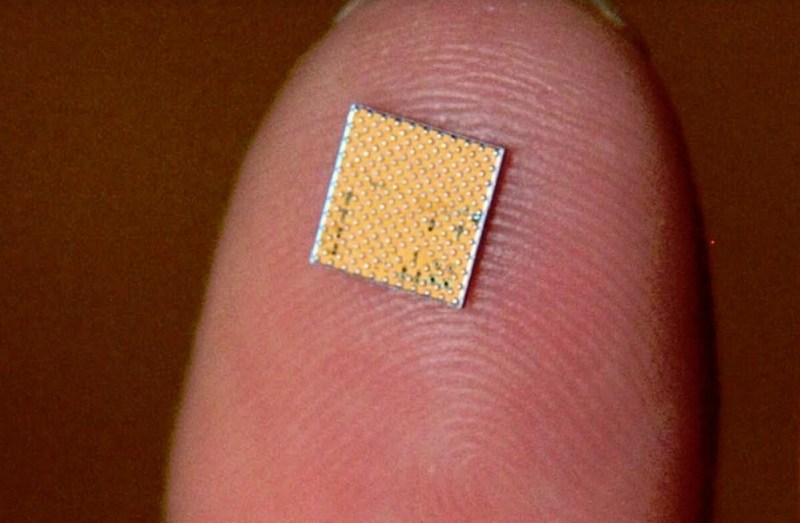 The base band itself we’ll start to sample in the first half of this year. The reason it’s a few months behind is because cellular is based on standards. We want to make sure we incorporate as much of the next-generation new radio technologies into that solution. Think of it as being in the oven, just waiting for the last set of features to get in there for release.

You’ll see a full chip kit solution by Intel in the second half of this year. With the car, you can put something in the trunk now, but then you can put something into a more mobile form factor. If you want to test it in a smaller mobile device, in an airborne drone, in a tetherless headset for AR and VR, it opens up all of those opportunities.

VB: 5G sounds very promising. I remember so many other transitions, though. 4G was supposed to bring great things, but Verizon charged us very high rates for data, and then we had to switch to T-Mobile, which had poor voice connections. It seems like there are all these tradeoffs when a new wireless data tech is introduced. Everybody soaks up the capacity, and it’s not enough again.

Topol: First of all, you hear a lot about 5G from a cellular standpoint, as cellular technology. But 5G will also see advancements in Wi-Fi and Wi-gig. If you think about those solutions, all of them will be brought to new standards. They’ll evolve. As much as you’ll see cellular business models, subscription models, you’ll see multi-gigabit unlicensed spectrum data availability as well. Those business models will evolve.

We’re building prototypes for both licensed and unlicensed technologies. You’re just seeing a lot of early advances in cellular because much of the network deployment and infrastructure — that work happens years before commercialization. The early movers are the network operators and infrastructure providers, building the foundation. Typically, you see the unlicensed technologies come in and complement that along the way.

We see 5G as a balanced situation. You’ll see certain verticals that move directly to a subscription cellular-based model, but you’ll see others that rely on unlicensed technology, especially when you’re talking about multi-gigabit data rates. When you talk about an autonomous vehicle that’ll have thousands of gigabits of data generated by the machine learning onboard and transmitting over a network, it’ll force changes in those models. Not only in the way the network is monetized, but think of — in 5G there will also be machine-to-machine communication. 5G won’t just be about broadband. Removing some of that congestion from the network and allowing car-to-car communication, car-to-infrastructure, drone-to-infrastructure — that should help with a lot of the efficiency and congestion in the network. 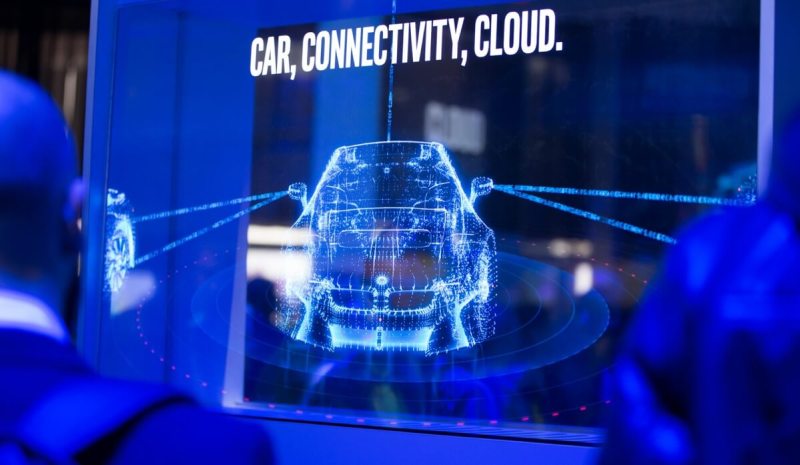 Above: The Intel Go platform will span from the car to the cloud.

VB: What about the notion of how usage leads to capacity problems? I think of the CES press conferences of years past. Everyone’s on Wi-Fi, and when one guy starts livestreaming it brings down the network for everybody.

Topol: You’ll see some real innovation with 5G. From a network standpoint, as you probably know, we provide solutions in network infrastructure as well — the core access network, the cloud. What you’ll you see in 5G is technology called “network slicing.” It’ll allocate and protect bands of spectrum or data rates for specific uses. It could be specifically for vehicles to communicate. It could be for a hot spot in a venue or activity. You’ll start to see this slicing technology come into play in 5G to avoid that congestion you’re talking about, where something can completely crater a network. We’re already developing that as a technology, and I think that will help quite a bit.

You’re going to see millimeter-wave technology as a great offload for a lot of network congestion — anything in a highly dense environment. Today, you’re talking about data rates in the hundreds of megabits per second for download speed. With 5G, you’ll see multi-gigabit capability with millimeter-wave. The pipe it opens up to offload a lot of that data — I think you’ll see a real improvement in congestion.

VB: How soon do you think some of these things are happening along the road map?

Topol: You’ll see OEMs start to commercialize 5G solutions as early as next year. The networks themselves will be fully deployed in 2020, probably. Just like LTE, you’ll see devices come forward that say they’re LTE-ready, but maybe the coverage isn’t fantastic yet. It might be more of a hotspot capability in certain places or parts of a city. You’ll see that progression between 2018 and 2020. But you can look at 2020 as the time when you’ll see major network operators and infrastructure partners fully deploying 5G capability.

VB: At that stage, is the United States up to parity with a place like South Korea?

Topol: The U.S. is equally aggressive in deploying 5G. When you look at the announcements made by U.S. operators, they have very aggressive plans. As I say, you’ll see the early adoption. That’s why Intel is ready with solutions, because you know there will be early adopters and movers. But when you’re talking about pervasive coverage with 5G networks, that’s more likely in 2020. You’ll see announcements by operators long before that.