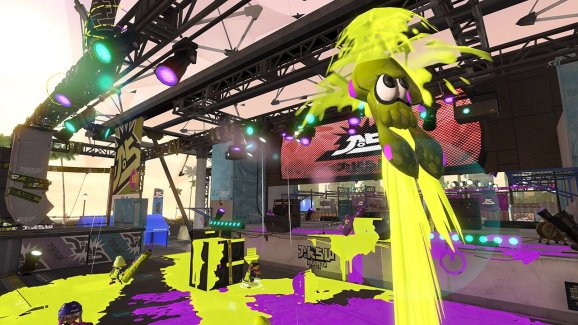 The inklings return in Splatoon 2.

Nintendo finally revealed the details on its new hybrid console, the Nintendo Switch, this week. Releasing on March 3 for $300, the console can connect to a TV, and players can also enjoy it in various portable modes.

But what’s a system without any games? And while the Switch is launching with fewer titles than both the Wii and the Wii U, Nintendo brought what little they were working — as far as announced titles go — to the Nintendo Switch event in New York City.

I’ve already written on The Legend of Zelda: Breath of the Wild and Mario Kart 8 Deluxe Edition, two of the Switch’s biggest titles, but the event had other games to show off the new console. First, let’s look at what Nintendo brought, and then, I’ll dig into two of the third-party titles that are also coming to the Switch. 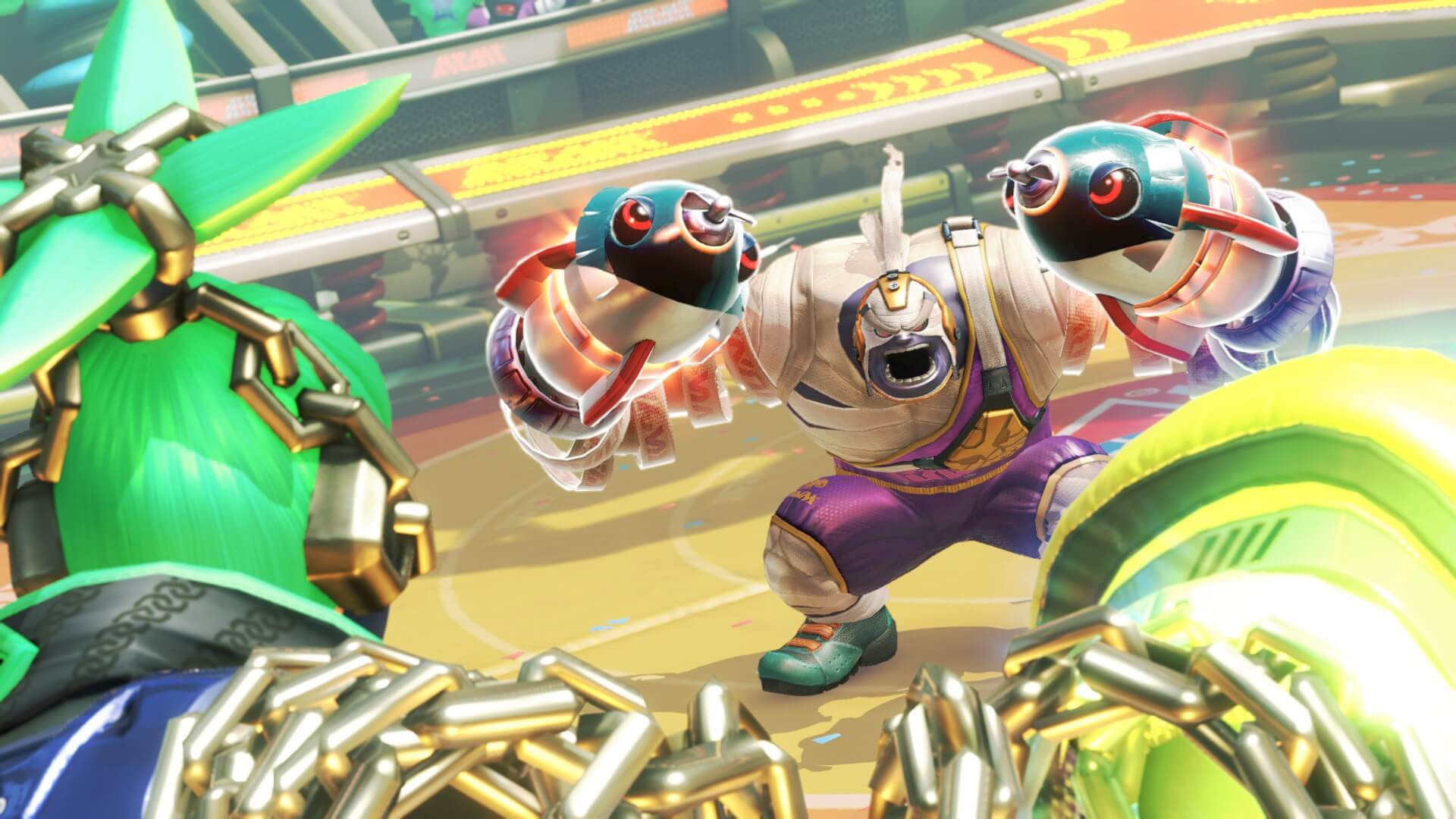 Above: Arms is one of Nintendo’s new IPs coming to the Switch.

One of Nintendo’s new Switch IPs is Arms, which is missing the Switch launch, coming out late this spring.

Arms is a punching-based fighting game. Picture a more out-there version of Punch-Out!! with power-ups and you’ve got the basic idea. The demo at the event included five playable characters: Master Mummy, Ribbon Girl, Ninjara, Mechanica, and Spring Man. In the split-screen two-player mode I played, the goal was to punch your opponent until you win.

In the demo, I held the two Joy-Con controllers sideways with my thumb resting on the L and R buttons. It’s an awkward way to hold the controllers, but it has also been confirmed to work with both the pro controller and the Joy-Con grip. Tilting the controllers moved the character, with the L button triggering a dash and the R button initiating a jump. Tilting both controllers inward caused the character to block. This action sometimes registered as an attack from one hand or the other, instead of a block.

To punch in Arms p– at least in the demo — I had to physically punch with the Joy-Cons. The new HD Rumble added vibrations to each punch; almost feeling like a fishing line casting and unreeling in my hand. It fit the expanding length of the character’s arms, but it was still weird.

By tilting the Joy-Con on each swing, players are able to aim their punches. The actual controlling of the punches didn’t seem perfect, but it was cool that you could almost navigate each far-reaching punch like a guided missile on a path or trajectory.

Arms is similar to something we’ve seen before — I know Nintendo hasn’t forgotten about Punch-Out! — and it feels like it could have been made two generations ago. We’ll see just how far Arms reach is — and how much it offers players — when it launches later this year. 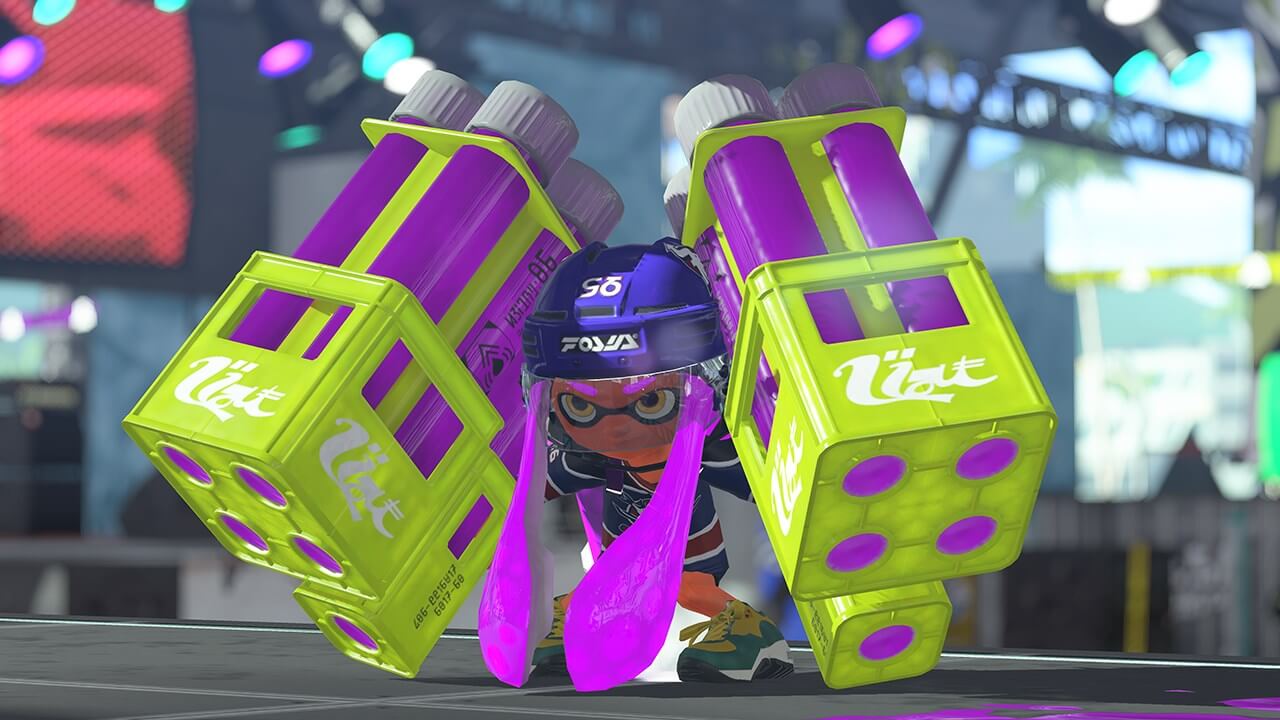 Above: Wii U breakout hit Splatoon is getting a sequel on Switch.

One of the Wii U’s biggest hits, Splatoon, is getting a sequel — set for this summer — on the Switch,

Two years have passed since the original game’s release, and Nintendo is reflecting that within Splatoon’s in-game universe, with new weapons and fashion options.

When playing Splatoon 2 using the Switch’s pro controller, which makes use of gyro controls similar to the Wii U, I found the motion-based aiming more awkward than I remember it being. So, hopefully, Nintendo includes the custom control options from the first game.

The demo featured a new two-handed weapon, the Solar Dualies. With the dualies equipped, players can press B while shooting to roll out of the way, which is a unique mechanic exclusive to that weapon. It didn’t really seem to be that big of a dodging maneuver, though.

Splatoon used the Wii U GamePad to display a map but also for its super jump feature, which allowed players to touch the screen and warp to other team members. Now, sans GamePad screen, the Switch workaround is pressing X to open the map, picking a D-pad direction that is assigned to a player, and then pressing A to quick jump. It was a little odd to have to use all three buttons to get the super jump to work, and for some reason, while playing on the pro controller, I had issues getting the jump to happen — an issue I didn’t have playing on the Switch with the Joy-Con docked to it directly.

I wasn’t a fan of the first Splatoon — or its backward approach to locking in-game content on the disc — and got bored with it quickly. It doesn’t look like it will include a whole lot of new elements this time around that may bring in new players or people who didn’t love the original title like myself. The rep also didn’t know if the original maps will return or how maps might be rolled out. It didn’t look that great graphically, either. Overall, Splatoon 2 feels more like an incremental update than a true sequel. 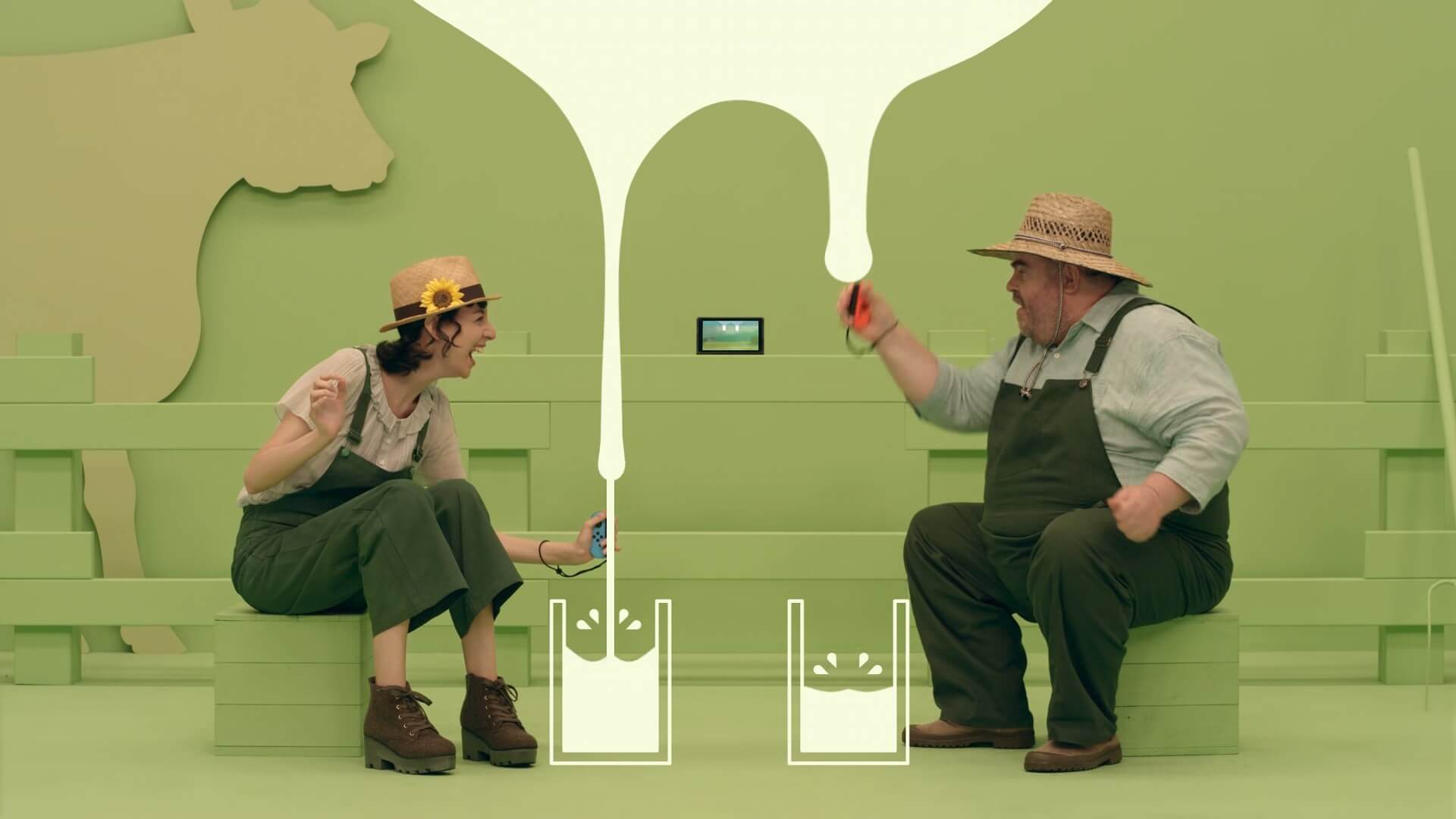 Above: Yes, milking cows is a real minigame in 1-2-Switch.

Nintendo’s second new IP, 1-2-Switch is one of the only Nintendo games actually launching with the system, and it will be available March 3 for $49.99. With 1-2-Switch, Nintendo seems to be trying to make another party game that will sell the Switch in the same way Wii Sports did for the Wii.

Here’s the rub: I don’t think they have.

I got to play four 1-2-Switch mini games — Copy Dance, Milk, Ball Count, and Quick Draw — and all of them are quite short tech-demo like experiences that I don’t think are going to sell people on the Switch the same way Wii Sports sold the Wii.

It’s going to be a tough sell for Nintendo to convince people to pay $50 for 1-2-Switch, and I’m curious to see how many games the final product actually ends up including, and if it will include any type of framework provided for playing the games besides just picking and playing each game for a quick play session here and there. 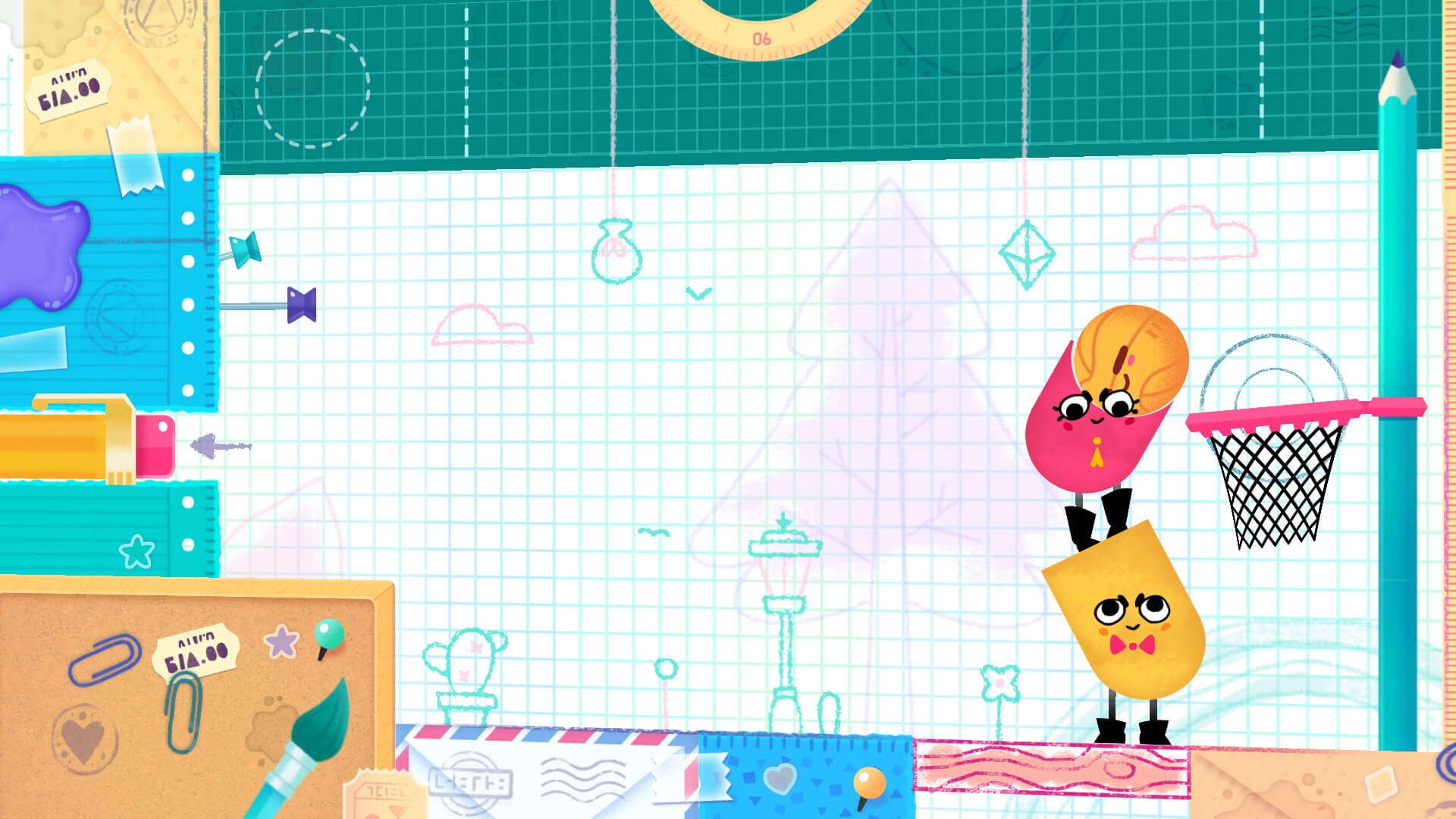 Above: Snipperclips – Cut it out, together! is a new puzzle title for Nintendo Switch.

Another one of Nintendo’s Switch launch-window titles, Snipperclips is a unique new puzzle game set for release sometime in March for $20.

In the game, you play as a colored shape can “cut” the area of another player’s shape when you overlap it. This mechanic leads to puzzle solving — such as cutting one player into a point to pop balloons or into a small sliver to hit a button. I had more fun cutting the other player apart than actually solving the puzzles, but I do think Snipperclips will be an interesting title, especially in co-op and multiplayer (a single-player mode is also available, however).

While this is clearly a smaller scale title, Nintendo has had success in the past with other releases like Pushmo, so puzzle fans may want to keep an eye on Snipperclips. 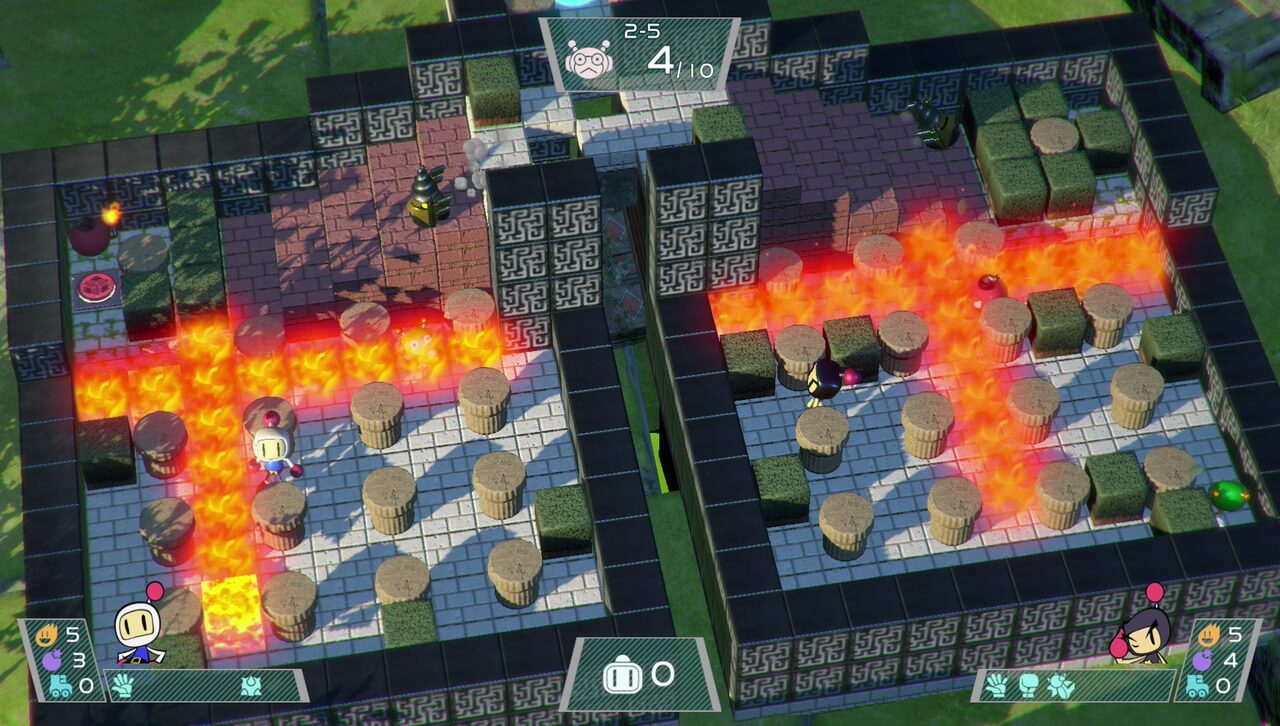 Above: Things get a little explosive in the newest Bomberman title.

It’s been a long time, Bomberman. The hectic bomb-dropping hero returns to the Switch in Super Bomberman R, currently set for a March release.

Super Bomberman R has a battle mode (both local and online), as well as a 50-stage story mode that can be played in co-op. Local multiplayer supports up to eight controllers, but the demo rep wouldn’t confirm or deny online co-op, so, take that for what it’s worth.

The levels in the campaign that I played were a little slower paced than the multiplayer battles that I’m used to, but multiplayer is exactly the same Bomberman fun you’ve come to expect. Graphically, it was a little jaggy, but it was cool to see the game using retro style icons for the various battle power-ups.

Either way, I’m excited to play a Bomberman game again, though I’m curious to know how deep this version will be and what price point it’s going to end up landing at. 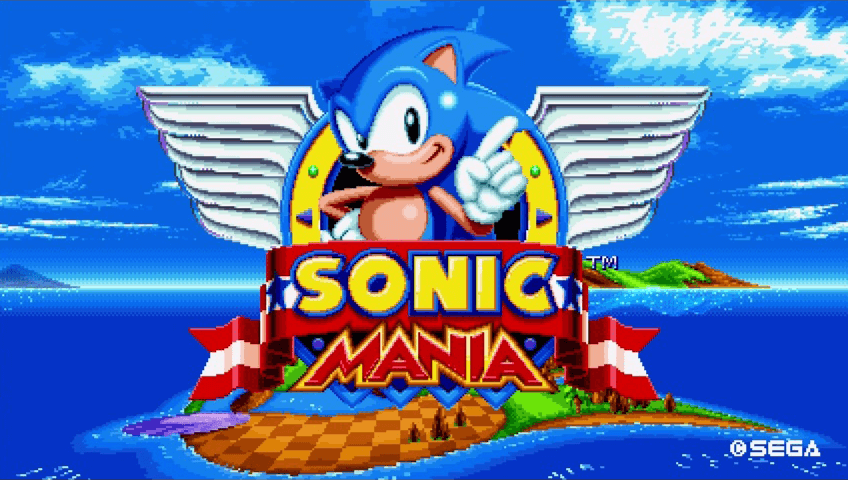 Above: Sonic returns to his roots — again — in Sonic Mania.

Another retro-leaning release, Sonic Mania is bringing the blue blur back to his roots with graphics fresh out of your nostalgic memories. Sonic Mania is releasing on Switch sometime this spring. Running at 60 frames per second, the title is a collaboration among Sega, Christian Whitehead, Headcannon, and PagodaWest Games.

The Switch event demo had two playable levels: classic Green Hill, and a cool movie themed level, complete with popcorn and Eggman director chairs. I also liked the new graphical effects that take advantage of the modern hardware. Oh, and a second player can also use one of the Joy-Cons to control Tails. The fox hasn’t been forgotten.

It seems  — at least from this small taste — like Sonic Mania is doing retro Sonic right. And that’s a good thing.