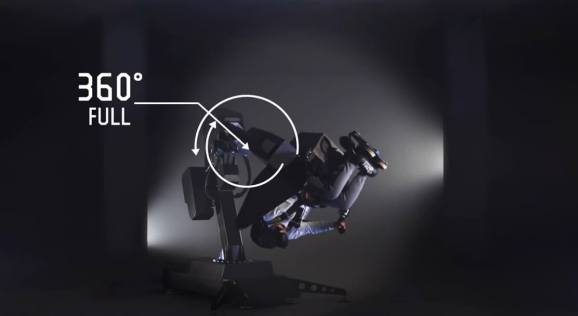 MMOne announced that the commercial version of its insane gaming chair mimics the motions that happen in a virtual reality game and makes you feel every twist and turn in a physical way.

The Ukraine-based company wants to turn your VR world upside down with a giant simulator arm that spins you around 360 degrees to match what happens in VR. It represents the high end of what is possible in the virtual reality business, which could hit $30 billion by 2020, according to tech adviser Digi-Capital.

The company has created its TUV-certified (based on a European safety certification group) commercial version, as shown in the video below. The simulator arm is meant to be part of a VR location-based entertainment attraction. The arm is now compatible with a number of games, including the racing sim Project Cars from Slightly Mad Studios, DCS World (flight simulator) from Eagle Dynamics, Red Bull Air Race from Slight Mad Studios, and Wingracers and Trackmania Turbo from Ubisoft.

I tried it out about a year ago. You can really feel it when you do things like fall off a cliff, drive along a side wall, and do a barrel roll in an aircraft. MMOne hasn’t set a price for the commercial version yet.

MMOne Company cofounder Alex Ryzhkin said last year in an interview with GamesBeat that the company wants to deliver the ultimate immersive and interactive experience to accompany VR headsets like the Oculus Rift and the HTC Vive. I played Ubisoft’s Trackmania racing game, as well as an aerial stunt flying game with the MMOne. It was an adrenaline rush, and it left me a little woozy when I was spinning upside down.

The MMOne Company, based in Odessa, Ukraine, created last year’s prototype with about $50,000 worth of parts. It included a three-axis “gaming chair” that matches movements you make in a game while wearing a VR headset. The chair can rotate on three axes, going 45 degrees to the left and right, raising 45 degrees, and revolving 360 degrees.

Ryzhkin has been showing a lot of demos of the technology. I could see it being popular in theme parks and other entertainment venues. Perhaps the closest competition comes from an actual maker of amusement park rides, the Kuka Coaster from Kuka Robot Group, which was recently acquired.

Competitors include makers of aircraft simulators, but those can cost in the millions of dollars, and they don’t necessarily offer as visceral an experience as the MMOne, Ryzhkin said. The company plans to operate units that it can lease to various customers, who can operate it as a kind of entertainment ride.

“We want to put this in shopping malls all over the place,” Ryzhkin said. “It’s a new form of out-of-home entertainment.”

For the sake of comparison, here’s a video of my demo of the prototype a year ago.