Consoles blew their mobile counterparts out of the water

GamesBeat has partnered with iSpot.tv, which measures TV advertising in real time, to bring you a monthly report on how gaming brands are spending. The results below are for the top five spending gaming industry brands in December 2016. 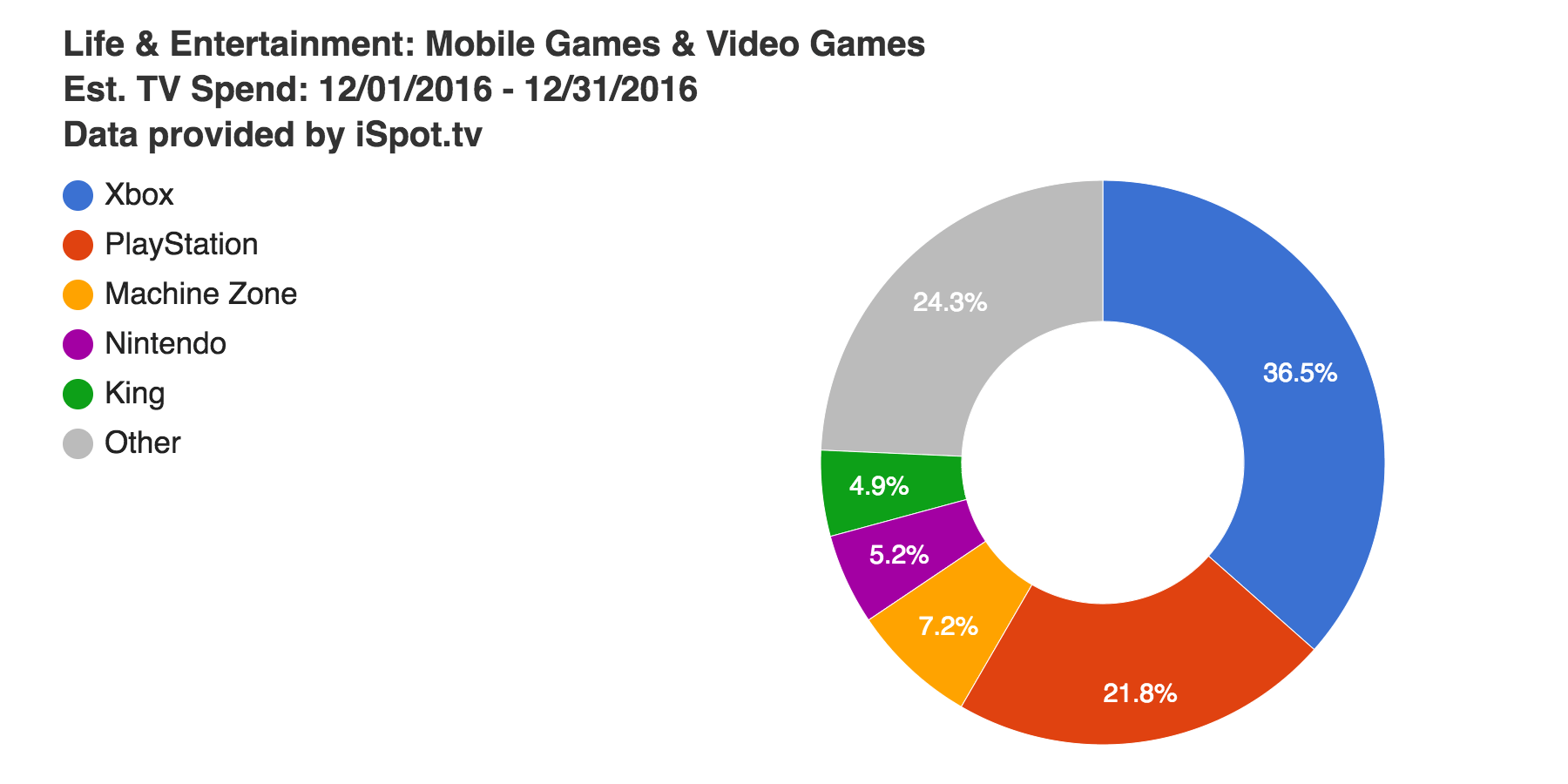 Last month gaming brands spent an estimated $85.8 million, a decrease from November’s high of $101.8 million. Over the course of the month, 34 brands ran 106 spots 23,591 times on national TV, generating nearly 5 billion impressions. The top two brands, Xbox and PlayStation, had budgets three-to-seven times higher than the other companies on the chart.

At the top of the chart for December was Xbox, who surpassed previous leader PlayStation with 36.5 percent of the industry’s spend. The brand spent $31.4 million on 14 spots that ran 3,807 times, generating 1.2 billion TV ad impressions. Xbox prioritized its budget towards sports programming, spending the most on ads that aired during NFL Football and NBA Basketball, as well as spending heavily on ESPN, NFL Network, and Fox networks in general. The commercial with the most spend (an estimated $7.1 million) was 4K Ultra HD Blu-ray.

Playstation grabbed second place with 21.8 percent of the spend, amounting to an estimated $18.7 million. It ran nine spots 2,720 times which resulted in 998.8 million TV impressions. The majority of its spend, $12 million, went toward “The King.” In terms of network spend, PlayStation spent the most on ESPN, Fox, and Cartoon Network; for specific shows, it placed budget against airings during NFL football, NBA basketball, and The Walking Dead.

Although slow to start with its December TV advertising, MZ picked up the pace around Christmas and ended the month with almost $6.2 million in estimated spend. The company aired three spots 3,821 times for a total of 379.9 million TV ad impressions. It placed the bulk of its budget (an estimated $4.8 million) towards“Mobile Strike: Heavy Artillery” featuring Arnold Schwarzenegger. Just like the top two brands, Machine Zone put most of its spend towards sports-themed programming, running ads on NFL Network, Fox News, and ESPN as well as during individual broadcasts of NFL football, NFL Fantasy Live, and NBA basketball.

King rounds out the chart with 4.9 percent of the industry’s spend, amounting to an estimated $4.2 million. It aired just one ad 2,522 times for 412 million TV impressions: “Candy Crush Saga: Mannequin Challenge, Color Bomb Style.” King advertised on a variety of networks including TNT, AMC, and E! and spent the most on airings during Breaking Bad reruns, Holiday Homecoming With Jewel, and Harry.