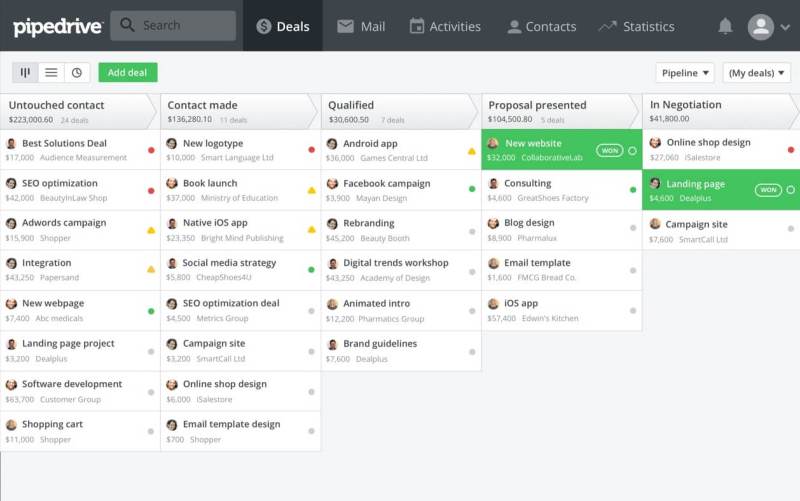 The company claims to serve more than 30,000 small business customers globally, though it also has teams from big companies such as Amazon on its client base. It counts 200 employees in Tallinn and its headquarters, which is now based in New York.

Prior to now, Pipedrive had raised around $14 million in VC funding, and its latest cash influx will allow it to develop its product, “grow its partner ecosystem, and scale customer growth” globally, according to a company statement. And grabbing Atomico as an investor is a major coup, as the London-based VC firm has some notable people at the helm, with some big brands in its portfolio, such as Skype, Supercell, Truecaller, Viagogo, Rdio, and Jawbone.

“Partnership with Atomico is a huge victory for us, as they are one of the few VC firms whose partners have hands-on experience building multi-billion, global, and fast-growing technology companies,” said Timo Rein, CEO and cofounder of Pipedrive. “Selling is hard no matter where you do business. This new partnership will enable us to fulfil our mission of helping salespeople around the world sell better, whether they live in NYC or a small town in Brazil.”

There is, of course, no shortage of CRM tools out there in the wild already, including heavyweights such as Salesforce, as well as well-established alternatives, including Insightly, Zoho CRM, Base, and Capsule. But Pipedrive promises a “refreshing alternative” to a market that’s laden with software “designed to control salespeople rather than help them succeed.” In real terms, Pipedrive pitches itself as a tool for the hourly and daily needs of salespeople working in small businesses.

“Timo and his team at Pipedrive are building a company that is quickly becoming the CRM software of choice for small businesses, which will help millions of companies sell better in the future,” said Atomico’s Teddie Wardi. “While there are plenty of established CRM solutions for the enterprise market, CRM for SMBs is a largely untapped market and is worth over $10 billion. The majority of small businesses still use spreadsheets or even pen and paper to manage their sales, but Pipedrive simplifies the process and is built around the precise needs of a salesperson.”

As part of the deal,  Wardi will join Pipedrive’s board, with Atomico founder and CEO Niklas Zennström joining as “board observer.”