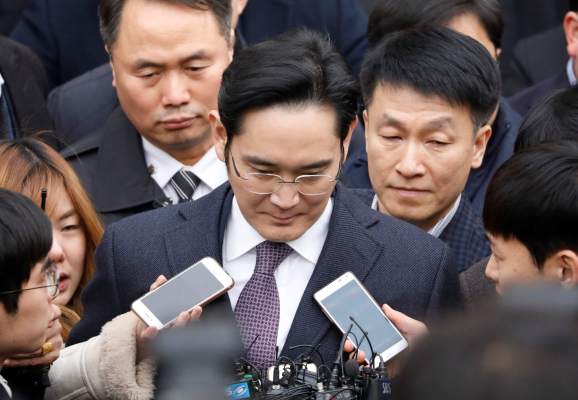 (Reuters) – A South Korean court on Thursday dismissed a warrant to arrest the head of the Samsung Group, the country’s largest conglomerate, amid a graft scandal that has led to the impeachment of President Park Geun-hye.

The pre-dawn decision by the Seoul Central District Court to allow Jay Y. Lee to go home is likely to come as a major relief to the company, whose leadership vacuum Lee has tried to fill since his father suffered a heart attack in 2014.

Lee, who had been questioned for 22 hours last week and was held overnight on Wednesday while the court reached its decision, left the Seoul Detention Centre carrying a white shopping bag and climbed into a car without talking to reporters.

The judge said in a statement that an arrest now was not necessary.

“After reviewing the contents and the process of the investigation so far … it is difficult to acknowledge the necessity and substantiality of an arrest at the current stage,” he said.

Samsung said in an emailed statement that it appreciated “the fact that the merits of this case can now be determined without the need for detention”.

The special prosecutor’s office on Monday said it would seek a warrant to arrest the group’s third-generation leader on suspicion of bribery, embezzlement and perjury. Lee had denied wrongdoing.

Park, 64, was impeached last month by parliament over the influence-peddling scandal. If the decision is upheld by the Constitutional Court, she will become South Korea’s first democratically elected leader to be forced from office early.

Park, who remains in office but stripped of her powers while the court decides her fate, has also denied wrongdoing.

The special prosecutor has accused Lee of paying bribes totaling 43 billion won ($36.70 million) to organizations linked to Choi Soon-sil, a friend of the president who is at the center of the scandal, to secure the 2015 merger of two affiliates and cement his control of the family business.

Earlier this week, the special prosecutor indicted the chairman of the National Pension Service, the world’s third-largest pension fund, on charges of abuse of power and giving false testimony.