As CEO of Epic Games, Tim Sweeney has been a graphics wizard and a leader of the game industry since the 1990s. And he hasn’t been afraid to rattle the cages of the powers that be, as evidenced by his clash with Microsoft over the openness of Windows during the past year. 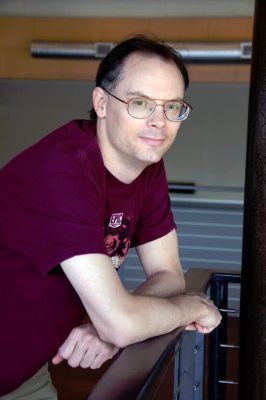 Above: Tim Sweeney, CEO of Epic Games, will receive the lifetime achievement award at GDC 2017.

For his work, he will be honored with one of the industry’s highest honors: the Lifetime Achievement award at the 2017 Game Developers Choice Awards on March 1. The award is an accolade awarded by Sweeney’s peers in the game development business.

Sweeney started Epic Games (then known as Epic MegaGames) as a shareware publisher in 1991, and he also published ZZT, a simple shooter title that enabled user-created worlds. But his lasting impact came with the creation of Unreal in 1998 and the release of the Unreal Engine in the same year.

The Unreal Engine has been used by thousands of game developers to create games with outstanding 3D graphics. Unreal Engine is the backbone graphics engine that has become an indispensable tool for creating high-end video games, and Sweeney was the main architect of the first-generation engine.

Sweeney is a shy, geeky leader. But he has tangled with Microsoft over the future of Windows and whether the operating system vendor was trying to close off the historically open PC platform in order to pursue an Apple-like path to greater profits.

When I asked him last May about why he went public with his dispute with Microsoft, he replied, “I spent 18 months emailing, meeting, and badgering Microsoft about this behind the scenes. There are a lot of great people at Microsoft who share the idea that Windows should be open, but there are also some bean-counters here and there.”

Sweeney has also done his best to be a seer. At the VRX virtual reality show in December, he gave a speech about how to build the Metaverse, the virtual world envisioned by Neal Stephenson in the novel Snow Crash in 1992. That novel’s vision of a pervasive cyberspace where we live, work, and play has inspired many a startup including Second Life maker Linden Lab and Stephenson’s current employer, augmented reality glasses maker Magic Leap. Sweeney’s recipe for building the Metaverse was practical, and it also spelled out the need for it to be open, and not owned by one company.

Sweeney also worked to make the Unreal Engine extensible via UnrealScript, a spiritual successor to his object-oriented scripting language for ZZT. This simple way for non-coders to get complex creations made easily led to extensive and creative player modding of games – one of the earliest blossoming of user-generated content.

The engine has gone through four major revisions, and it has enabled Epic’s own titles such as Gears of War, Paragon and Fortnite, as well as notable independently created games such as Rocket League, Abzû, Astroneer and ARK: Survival Evolved. The engine is now being adapted by non-game development teams across the automotive, aviation, architecture, VR/AR, complex data visualization and film sectors.