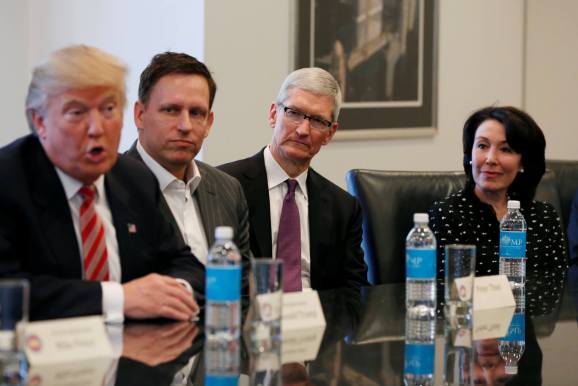 On a drizzly Friday afternoon in Washington — Today. This very afternoon. — Chief Justice John Roberts swore in Donald J. Trump as the 45th president of the United States. The Trump era officially begins.

In Silicon Valley, Election Night shock has worn off. After meeting Trump’s victory with mouth-agape disbelief, the tech industry, at odds with Trump over just about everything, is formulating a response. What the industry does now, and all the stuff it doesn’t do, will tell us a lot about the next four years.

For now, tech workers are at the center of the action. Protests began in Palo Alto earlier this week, targeting Peter Thiel, Trump’s Valley confidant, and Palantir, the secretive data mining company Thiel cofounded. The group leading the event, the Tech Workers Coalition, asserts that Palantir and Thiel “shouldn’t profit from a Muslim database and mass deportations.”

Across the U.S., employees from Google, Adobe, Slack, Kickstarter, Instacart, and more have independently organized groups to attend the Women’s March, a massive effort to protest the “rhetoric of the past election cycle,” on Saturday. The Washington March counts Girls Who Code and iFundWomen as partners. One startup, Skedaddle, is busing 11,000 people to Washington for the event. Another, Flex, is hosting a roundtable for women’s health startups that night in San Francisco.

To an extent, public pressure and petitions have forced some companies to talk publicly about the issues raised by Trump’s divisive campaign. Facebook, Microsoft, Apple, Google, and even Palantir say they will not help the government create Trump’s proposed Muslim database. These companies have said far less about Trump’s campaign promise to deport up to 3 million immigrants. As for the Women’s March — major tech companies won’t talk about it on the record (we’ve reached out to 30 for comment, including Google, Apple, Microsoft, Twitter and Facebook).

Most companies are determined to sit on their hands, even though it’s likely Trump will introduce policies that rattle their bottom lines or clash with their principles. This may be particularly true of Facebook, which requires employees to separate all political activity “from work and never represent that such activities are being conducted on behalf of Facebook.”

There are exceptions among industry leaders, like Elon Musk, Travis Kalanick, and Thiel. The first two are on Trump’s Strategic and Policy Forum and will “meet with the President frequently to share their specific experience and knowledge as the President implements his economic agenda,” the Trump-Pence Transition Team wrote in December. And perhaps this trio will shape Trump’s vague tech policy agenda. If they do, we’ll know it when we see it.

The rest of the Valley powerhouses (Zuckerberg, Page, Cook, Bezos, and so on) won’t stay quiet for long. They can’t. As Trump’s promises become policy — perhaps the kind Silicon Valley has feared all along: eliminating visa programs, dismantling Net Neutrality, expanding surveillance measures, orchestrating mass deportations, developing a Muslim database, on and on — industry leaders will be forced to speak up.

The very nature of Trump’s plans, combined with Silicon Valley’s breed of liberalism, is bound to thrust the most politically neutral companies into partisan debates. But just as Trump proved to be a divisive and polarizing figure in the general populace, his policies may lead to fissures and factions within the industry. CEOs may be forced to choose between what’s best for their shareholders and our national values.

An increasingly mainstream tech industry is bound to clash with President Trump — it’s already happening on the ground floor. And the ramifications extend right to the heart of Trump’s base, where the tech industry is racing to automate the many jobs Trump pledged to create.