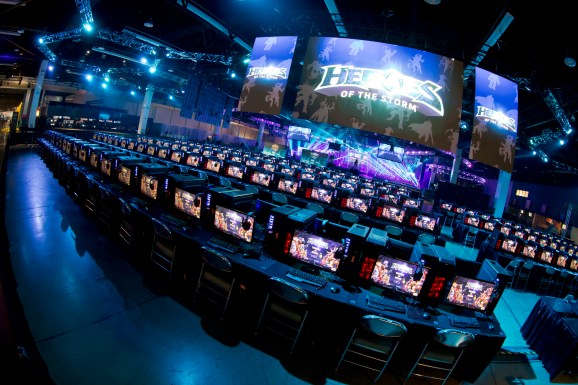 A scene from Heroes of the Storm at BlizzCon.

The esports industry, for many, seems to have appeared overnight – at least in the mainstream. It tallied $892.8 million in revenues in 2016 with over 213.8 million spectators watching the competitive gaming tournaments and matches. That’s coming from market researcher SuperData, which estimate that the industry will surpass the $1 billion dollar mark by 2018 and reach a global audience of 303 million by 2019. Asia leads, but North America and Europe follow closely.

A few years ago, you may have noticed some frowns and criticisms, at least in western countries, about the societal consequences of promoting this level and intensity of gaming, particularly on youth. But the landscape has evolved beyond that narrow-minded concern and the market appears to have accepted the reality that competitive gaming is here not only to stay, but thrive. The narrative has changed.

“Traditionally, a lot of formal research took a negative stance on gaming and looked at behaviors such as addiction and social isolation,” Dan Himmelstein, founder and “brain coach” at Premier eSports Academy, told me. “However, we are now seeing studies looking at how to best influence optimal performance in esports, increased cognitive functions correlated with gaming, and positive effects on mental health.”

One factor for why esports is going through a growth spurt is the synergy that comes from sitting at multiple intersections. One is the convergence of video, live events, and games. Another is the interplay between the players, game publishers, and broadcasters. And it looks like the next one might very well be the compounding impact that emerging tech like AR, VR, and 5G will have on enhancing, and maybe even transforming, the spectator experience. We already see a glimmer of this with the $6.2 million Sliver.tv raised last summer for its immersive virtual reality platform.

When asked I asked Ralf Reichert, CEO of ESL at Turtle Entertainment, what he saw on the horizon for the industry in 2017, he said: “Bigger and better competitions and events with continuously expanding viewership breaking into new channels. Global and local partnerships with media and tech companies like Telefonica, Vivendi and many more to come will facilitate and accelerate that growth. Every sport in history has been built with media companies together and these type of coops will accelerate the growth of esports.”

Quite a bit of this success is owed to the game creators and publishers who clearly recognized the writing on the wall on how effective competitive gaming is to enriching the bottom line. It increases player engagement, lengthens the longevity of gaming titles, expands the field of franchise awareness, and compounds monetization potential in multiple directions that are continually being optimized and expanded.

The revenue streams include digital ads and sponsorship, which currently contributes to 70 percent of total revenue, along with merchandise, event tickets, virtual goods, prize pool contributions, media rights, and betting in allowable markets. Compared to traditional sports leagues like the NBA that makes an average of $15 per fan, esports makes about four times less at $3.30. So fine tuning the monetization mechanisms will be an important priority and we’re already seeing cannibalization of traditional sports viewership at the expense of its digital cousin.

Just like any industry, this stage in its development is mired by fragmentation and the early onrush of new contenders looking to reap and sweep in early profits.

“Many companies are looking to rival and dethrone the leaders just by throwing money at it,” Paul Kats, director of Analytics and Business Intelligence at Azubu, the global esports broadcast network, told me. “This industry is driven by passion and authenticity. Many of the new companies do not have that and are just trying to make a quick buck. The industry will thrive, but many of the new companies and investors will not be around in a few years.”

The rapid growth of esports also demands an accelerated pace to managing a wide range of issues that come into play when gaming turns professional and plugs into an entire ecosystem that depends on stability and good business practices. Think of the collegiate leagues in traditional sports, or the talent agencies, law firms, and training institutes that specialize in the industry. All of this, these varied players tailoring their focus directly on esports, will demand a finely woven bureaucratic system to be built and managed to the same degree of depth as we see in traditional sports. In fact, it’ll likely be even more elaborate and intricate.

“In traditional athletics, there is a formal developmental path which usually starts at youth participation, learning the basics of the sport while also learning vital life skills like communication, teamwork, and perseverance.” Himmelstein told me. “Then players are given different opportunities to progress through school sports and travel teams and coached all the way through. That’s not something we typically see in esports and players are left to do the brunt of their training on their own until they’re picked up by a team with structure.”

In practice, this will mean consolidating leagues, associations, and establishing the authority of regulatory bodies that can enter the scene and address the top growing pains on the table. Regulatory organizations like the Esports Integrity Coaltion have arisen only quite recently to help establish and maintain a code of ethics towards issues like doping, match fixing, in-game cheating, and poor sportsmanship. Organizing bodies will have to address standards like minimum pay for players, teams, and support staff like coaches and analysts. And with a heavy male skew (85 percent), addressing and promoting gender diversity will need to be seriously looked at.

“Esports, just like any other sport, won’t grow if surrounded by the stigma of integrity problems. So on a basic level, when it comes to match fixing, illegal or underage betting, doping and other sort of threatening factors, it is crucial that eSports event organizers, game publishers and everyone else in the ecosystem comes together to tackle that. On a higher level, when it comes to aspects such as player contracts, leagues sharing revenue with teams, player representation and media rights, the industry is facing an explosive growth in all of those areas and it’s only natural individual institutions unite to introduce a level of regulation we can all refer to,” Reichert told me.

There’s so much to say, and that’s the point. Most of the major traditional sports were established over a hundred years ago. Competitive gaming will likely catch up within only a few, and we’ll all watch in awe as it forms into wholes, springs out branches, and develops into increasing influential and highly profitable industry.