Yahoo ($YHOO) on Monday released its fourth quarter earnings results, saying it generated $1.47 billion in revenue (a 15 percent increase) and earnings per share of $0.17. Wall Street analysts had expected the company to report $1.38 billion in revenue with an EPS of $0.13.

And while that may have given investors a needed boost, Yahoo also revealed that it does not expect to close its acquisition by Verizon until Q2 2017 — previously it expected to close this quarter. In its earnings release, Yahoo cites the enormous work required to meet closing conditions. “The company is working expeditiously to close the transaction as soon as practicable in Q2,” it wrote.

Amid all of that, chief executive Marissa Mayer boasted about Yahoo’s Q4, saying: “What we have achieved reflects some of the most impressive teamwork, focus, and resilience I’ve seen throughout my career. We continued to build our mobile and native businesses — delivering nearly $1.5 billion in mobile revenue and over $750 million in native revenue — while operating the company at the lowest cost structure in a decade. With our 2016 and Q4 financial results ahead of plan, and the continued stability in our user engagement trends, the opportunities ahead with Verizon look bright.”

With respect to Yahoo’s financials, much of its revenue continues to be from non-Mavens programs ($824 million). However, the company’s solution set consisting of mobile, video, native, and social initiatives saw a 25 percent year-over-year increase ($590 million) from 2016. More revenue continues to be generated from desktop than mobile, but mobile saw the largest annual increase — 57 percent ($459 million) versus 2.57 percent ($955 million).

Search revenue was $767 million for the quarter, up 45 percent from the same time last year. Financially speaking, it would appear Yahoo had a good quarter. 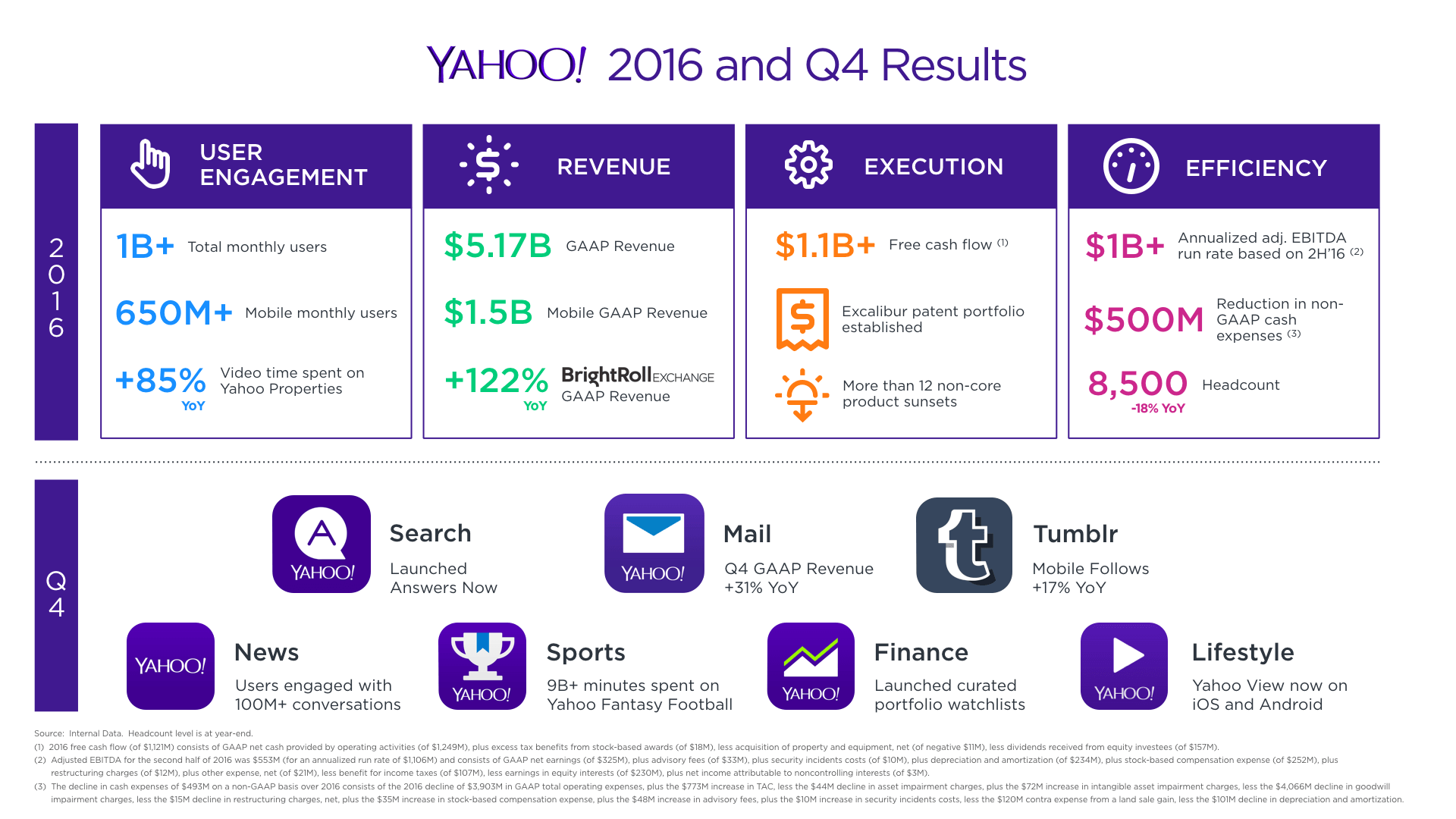 Today’s results come less than a day after news broke that the company was reportedly under investigation from federal regulators over its failure to notify investors in a timely basis about the multiple cyberattacks that were revealed last year. When reached for comment, a spokesperson directed VentureBeat to previous filings with the Securities and Exchange Commission: “the Company is cooperating with federal, state, and foreign governmental officials and agencies seeking information and/or documents about the Security Incident and related matters, including the U.S. Federal Trade Commission, the U.S. Securities and Exchange Commission, a number of State Attorneys General, and the U.S. Attorney’s office for the Southern District of New York.”

In today’s earnings, Mayer stated: “In addition to integration planning, our top priority continues to be enhancing security for our users. With security protocols and password changes in place, approximately 90% of our daily active users have already taken or do not need to take remedial action to protect their accounts, and we’re aggressively continuing to drive this number up. Our commitment to our users is unwavering, and we continue to be encouraged by their loyalty to us and their ongoing patronage of our products.”

The investigation by the SEC adds to a growing list of headaches for a company just itching to complete its $4.8 billion acquisition by Verizon. Besides the more than 1 billion user accounts compromised in 2013 and another 500 million accessed in 2014 by “state-sponsored hackers,” Yahoo has had to contend with fallout from its dealings with the U.S. government when it was revealed the company allegedly secretly scanned customer emails, although there is no evidence about what specific data had been handed over.

Of course there has been some development on the fate of Yahoo. Earlier this month, in an SEC filing, the company revealed Marissa Mayer will be departing from the board — but she’ll remain as CEO, for now. And after the the deal closes later this year, the pieces Verizon isn’t buying, namely the Alibaba and Yahoo Japan stakes, will be spun out into a new entity called Altaba.

Since its Verizon deal has yet to close, Yahoo said it will not be holding a conference call with analysts to discuss its latest earnings report.