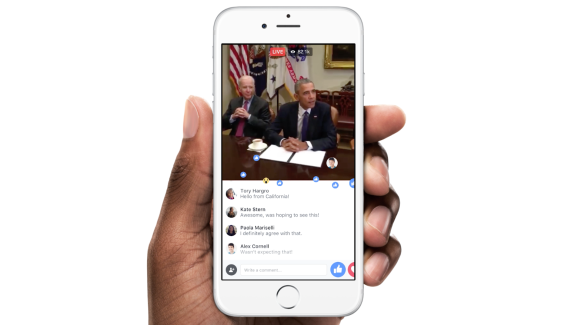 Facebook added Reactions to its video livestreaming product on April 5, 2016.

Last week, President Trump’s inauguration broke live video streaming records and became the largest live news event streamed, with 4.6 million viewers watching it concurrently at its peak. The massive online turnout was the capstone for a year that witnessed the advent of Facebook Live, Instagram Live, Twitter’s #GoLive, and musical.ly’s live.ly, as well as Periscope’s continued growth. 2016 was the year that pushed live video streaming into mainstream media and onto everyone’s phones.

Although YouTube had its first live web video stream in 2012 and opened up live web video streaming to all YouTube channels in 2013 via Google Hangouts, it wasn’t until 2016 that YouTube finally allowed live video streaming from its mobile app. By May 2016, 44 percent of the top 500 media companies’ Facebook pages had used live video; in July 2016, Facebook made contracts totaling over $50 million with 140 media companies and celebrities for them to produce Facebook Live content.

With Facebook as the early leader, these deals set the pace for the aggressive expansion of live video streaming last year. However, behind the scenes, 2017 is kicking off with a much different atmosphere. Even though Facebook is still reportedly continuing efforts to encourage ordinary users to create Facebook Live videos, last week Recode reported on the unlikelihood of Facebook renewing the live video deals from last spring and the push for long-form premium video content (à la Netflix).

Currently, the blanket term “live video streaming” commonly accounts for the entire spectrum of things to watch, regardless of how different the Inauguration might have been from your friend’s Saturday night house party. But actually, there are two types of live video streaming: Type I is created by media companies and celebrities, and it is essentially just a remediated form of traditional live television programming. And then there’s Type II, which consists of ordinary live videos created by regular people. Essentially, Facebook’s recent actions signal that it plans to de-emphasize Type I in favor of Type II.

It’s interesting that Mark Zuckerberg, who last month admitted that Facebook is a media company, made this decision. Facebook is in a prime position to become the leader of future mainstream cordless live television through its live video streaming. While Netflix and Amazon have moved Sherlock and New Girl (long-form, pre-recorded premium content) from our TVs to our laptops and phones, there is not yet a player who has successfully moved Fareed Zakaria GPS, the Superbowl, or the Oscars in a similar manner. Live television —  news, sports, and special events  –  is still stuck on cable or on separate, individual TV channels’ websites. Facebook has the opportunity to become everyone’s cordless go-to for such content.

Facebook spent the past year warming its users up to the idea of incorporating Facebook Live into their pre-existing Facebook usage. Today, Facebook Live is the most popular video livestreaming platform, after overtaking YouTube in this space. Personally, I have come to enjoy being able to watch streams such as Obama’s Farewell Address or Wall Street Journal press conferences from the ease and convenience of my phone or laptop, and surely many others have, as well.

Further, Facebook has grown into a news destination. It was the top non-TV news source for the 2016 U.S. election, after CNN and Fox News. People are already getting their daily news from reading news articles on Facebook. A further expansion into the livestreaming of CNN and Fox News directly on Facebook wouldn’t feel strange at all.

Lastly, as the world’s largest and most mainstream social network, Facebook is in an advantageous position to capitalize on the synergistic social aspects that accompany live video. It’s human nature to want to watch live events unfold with others  – it’s why we have watch parties for presidential debates or the Super Bowl. Also, socialization on Facebook is less likely to attract trolls or harassment than on YouTube or Twitter — even amongst strangers — because it’s more difficult for users to hide behind anonymous usernames.

However, Facebook’s continued push for Type II live video streaming (ordinary content by ordinary people) may not be worth the investment. It’s true that we have been converging on immediacy for shared social media  —  we’ve gone from posting every few days or weeks on Facebook to once to multiple times a day on Snapchat Stories or Instagram Stories —  but there is a limit to how much interesting, quality content an ordinary person can produce each day, compared to a media company or a celebrity. This might be a reason Snapchat, perhaps the most natural fit to lead this Type II kind of live video, hasn’t jumped on the bandwagon yet.

Given the advantages that Facebook has for becoming the go-to platform for cordless live television, it’s possible that its recent decision to favor Type II video will eventually translate into a missed opportunity. Nevertheless, 2017 will be a year to watch as Facebook continues easing into its identity as a new form of media company.