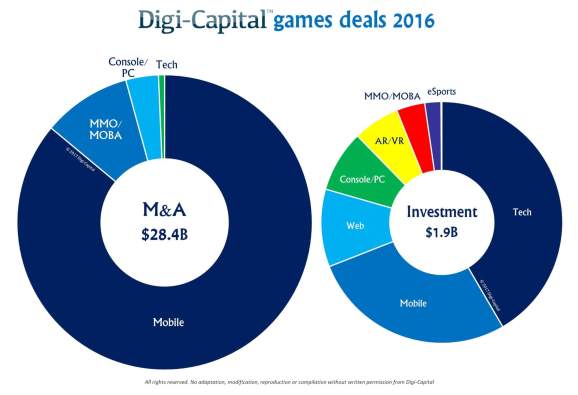 2016 saw plenty of money moving around in the game industry.

Tech mergers and acquisitions adviser Digi-Capital released its Games Report 2017, which revealed that $30.3 billion in game industry deals happened in 2016. This includes $28.4 billion of games mergers and acquisitions. This is a new record, up 77 percent from the previous record year in 2014. The $1.9 billion in games investment was the second-highest ever for a year.

As you can see in the chart above, most of the $28.4 billion in games mergers and acquisitions happened in the mobile world. According to Digi-Capital, mobile app revenues (not only games) were up 40 percent last year thanks to growth in China. Among the $1.9 billion spent on game investments, most of that went toward new researching and developing new technologies.

The average game deal cost $300 million in 2016, but some companies spent much more. Tencent’s acquisition of Clash of Clans developer Supercell cost that company $8.6 billion, while Activision Blizzard spent $5.9 billion on its deal to buy Candy Crush Saga developer King (that deal closed in 2016).

Things look bright for the future of the industry thanks to the growth of mobile and virtual reality.

“From here it looks like games could grow well beyond the $117 billion revenue we’re anticipating for 2017, potentially topping $170 billion by 2021,” Digi-Capital noted in a press release sent to GamesBeat. “Markets at this scale and maturity are ripe for consolidation, so don’t be surprised if a few more big deals happen this year. And while it’s always possible the market might not deliver such big numbers, mobile, VR and AR look set to keep things interesting.”