The Vancouver, Canada-based company has launched the game as part of an effort to create more original content on VR platforms, which are expected to generate $25 billion in revenue by 2021, according to tech advisor Digi-Capital.

It’s a tactile title where you use your hands to solve problems. The game comes from a startup that was founded by veterans of Roadhouse Interactive, a mobile game company that unexpectedly shut down last September.

“We call this a kinetic puzzle game,” said Tarnie Williams, CEO of Blueprint Reality, during an interview with GamesBeat at the recent VRX event in San Francisco.

Above: Awaken debuts today on Steam Early Access on the HTC Vive and Oculus Touch.

I saw a demo of the game, which had interesting 3D puzzles. I had to direct light beams in particular directions by manipulating objects in the colorful VR world. If I got the light beams to go in the right places, I solved the puzzle and move on to the next puzzle. I had to rotate the world and move around in 3D in order to see the puzzle solutions.

In Awaken, the player is an architect of light, solving a series of puzzles to evolve fantastic worlds with player interaction. Players solve each world individually, edit existing worlds and create new ones; then they can share these with friends and other players as challenges. Set in vibrant worlds with a dramatic art style, Awaken provides a mesmerizing visual and aural experience only available in VR.

“We are very excited to launch Awaken, a visually stunning puzzle game and dynamic music experience,” said Williams. “We set out to make a VR title with approachable, engaging gameplay and a universe that sets a powerful yet meditative tone.”

In Awaken, the player represents a new beginning. Players must awaken the universe, for it has too long been shrouded in darkness. Throughout the game, players must unlock and use their powers to guide the pulse of light and, as they harness the energy, awaken the Guardians. Together with the Guardians, players can push back the darkness and once again bathe the universe in light, and then life.

Ultimately, five different worlds will be available for players to explore, with each world providing 30 different puzzles or levels. The Early Access game includes all 30 of the puzzles for World 1, as well as the in-game level builder where players can create an unlimited amount of new levels using any and all of the puzzle pieces from World 1. A content update, at no additional charge, is planned within a month of release for World 2 and its puzzles, as well as an in-game content curation and sharing system. 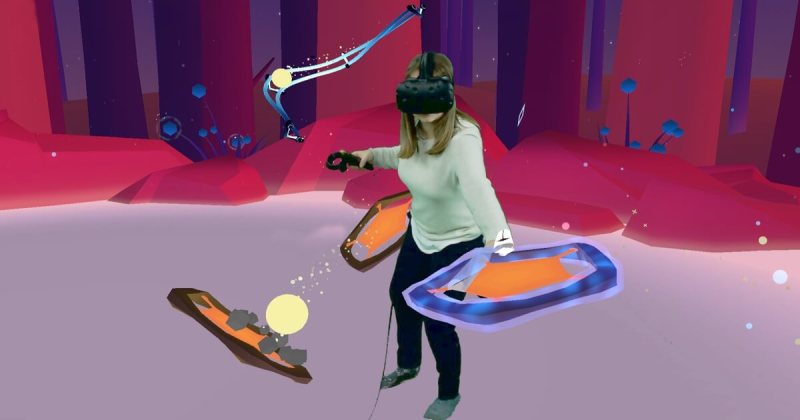 Above: You solve physics puzzles with your hands in Awaken.

Blueprint Reality is also running a contest for users to build and submit their most creative puzzles for consideration for inclusion in the game. With the level creation tools in Awaken, players can craft their own challenges and share the puzzle files with their friends and the community. The contest begins today and runs through February 16, 2017.

Entries will be judged on fun, creativity, and beauty, and players who create the winning puzzles have the potential to win NVidia GeForce GTX 1080, 1070, and 1060 graphics cards, and will have their levels featured and highlighted in-game to the community when the social sharing system launches. The title costs $30, and Blueprint Reality is offering a 15 percent discount for the first week.