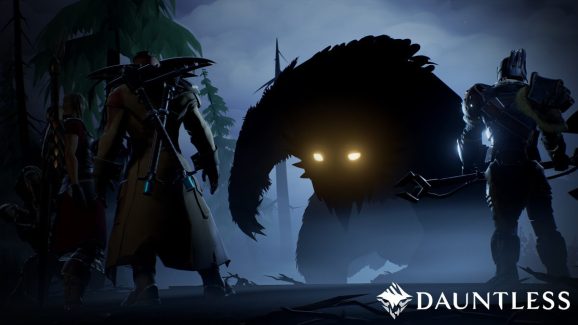 The Shrike is a mix of an owl and a bear -- and one of the beasts you'll take down in Dauntless.

I geeked out when I saw the Shrike.

Sure, I didn’t let Jesse Houston and Nick Clifford see all of my excitement when the beast appeared. I was checking out Dauntless, the upcoming free-to-play online action-role-playing game from Phoenix Labs. It’s a co-op game that should hit later this year. Houston is one of the studio’s three cofounders, and Clifford runs marketing efforts for the Vancouver-based company.

Dauntless has been in development for a little more than two years. Nearly all the team members, Houston said, have long histories in game development. Houston’s work includes Rainbow Six and Splinter Cell at Ubisoft, Mass Effect 2 and Mass Effect 3 and EA BioWare, and League of Legends at Riot, and other studio vets worked at Blizzard. While this may be Phoenix Labs’ rookie effort, its game designers, artists, coders, and programmers have all shipped games. It’s something Houston and his fellow founders — Sean Bender and Robin Mayne — looked for when staffing up the new company.

Dauntless is an action-RPG much in the vein of Monster Hunter. Your characters don’t have classes; weapons determine your play styles. You craft gear from resources you find around the Shattered Isles, along with the best pieces of behemoths that you slay. These Isles are facing a terrible threat from these beasts, and the player characters (Slayers) are the ones setting out to kill them. Making cool swords and armor out of their carcasses is a fringe benefit.

As we transitioned to talking about Dauntless, the Shrike shambled into the clearing. From the picture I saw before the mission started, I thought we were going to fight an avian monster. The behemoth’s cutout didn’t show much below its shoulders. I even thought the arms were wings.

Turns out, the beast has legs, too. And it looks just like one of Dungeons & Dragons’ most iconic monsters — the Owlbear. Part bear and part owl, the Owlbear has been part of D&D since 1975’s Greyhawk supplement (remember, the role-playing game debuted in 1974). The creature is beloved by generations of gamers, and it turns out that Phoenix Labs has its own soft spot for D&D‘s menagerie of monsters.

“Anecdotal story about D&D. [Dauntless’s] code-name was Archon, because everything we do at the studio is named after different monsters from the D&D 5th Edition [Monster] Manual,” Houston said with a laugh. “We just use it for naming conventions. The website is Basilisk, and the telemetry service is Chimera.”

I asked why they chose this for the naming convention, and Houston said, “It’s a little less sexist than hurricane-female names, and we’re a bunch of nerds.”

A Dauntless artist also hosts a Twitch stream each Monday with other Vancouver-based game developers for D&D, and Houston has played for much of his life.

Update, 5:17 p.m. Pacific: Phoenix Labs clarified that it was one of its artists who hosted the D&D sessions on Twitch, not the lead designer, as Houston said during our interview. GamesBeat has updated the story to reflect this.