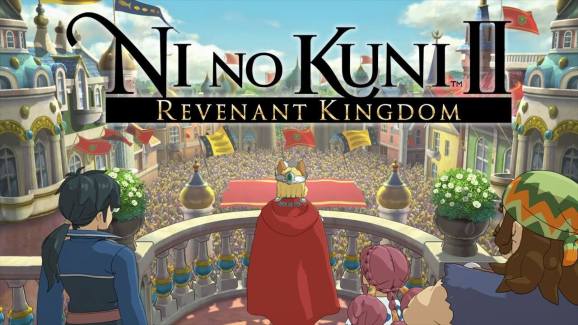 PC gamers are also going to get to play one of the year’s most anticipated Japanese role-playing games.

Bandai Namco announced today that Ni No Kuni II: Revenant Kingdom is coming out on PC. Before today, the PlayStation 4 was its only platform. Ni No Kuni II is releasing at an unknown date later this year. The original has sold more than 1.7 million copies worldwide, and expanding to the PC platform can bring in new fans for the franchise — as other studios have learned in recent years as they bring their Japanese RPGs to Steam.

The first Ni No Kuni is a PlayStation 3 exclusive that came out in the U.S. in 2013. It combines classic role-playing game mechanics like monster-collecting and strategy-based battles with an aesthetic inspired by Studio Ghibli, the Japanese animation studio behind hits like Spirited Away and My Neighbor Totoro. Studio Ghibli also produced animated cutscenes for the game.

Studio Ghibli itself isn’t working on Ni No Kuni II, but a former animator from the studio, Yoshiyuki Momose, is part of the game’s team. Joe Hisaishi, the composer responsible for many iconic scores from Studio Ghibli movies and who worked on the first Ni No Kuni’s soundtrack, is returning to make music for the sequel.

Bandai Namco is no stranger to releasing RPGs on Steam. It just so happened to have released Tales of Berseria on PC today. Its predecessor, Tales of Zestiria, came out on PC in 2015.

“In the world of Ni No Kuni II: Revenant Kingdom, players enter the kingdom of Ding Dong Dell, where cats, mice, and humans once lived in harmony,” Bandai Namco detailed in a press release sent to GamesBeat. “After a treacherous coup, Evan, the young boy king of Ding Dong Dell is banished from his kingdom. Ni No Kuni II: Revenant Kingdom recounts the story of this deposed king and his journey to build his own kingdom and unite the entire world.”