GB: The A.I. in some open world games is often a noticeable weakness. How do you try to set up the A.I. for something like soldiers at an outpost? Does the A.I. become more challenging depending on what level of difficulty you play on? 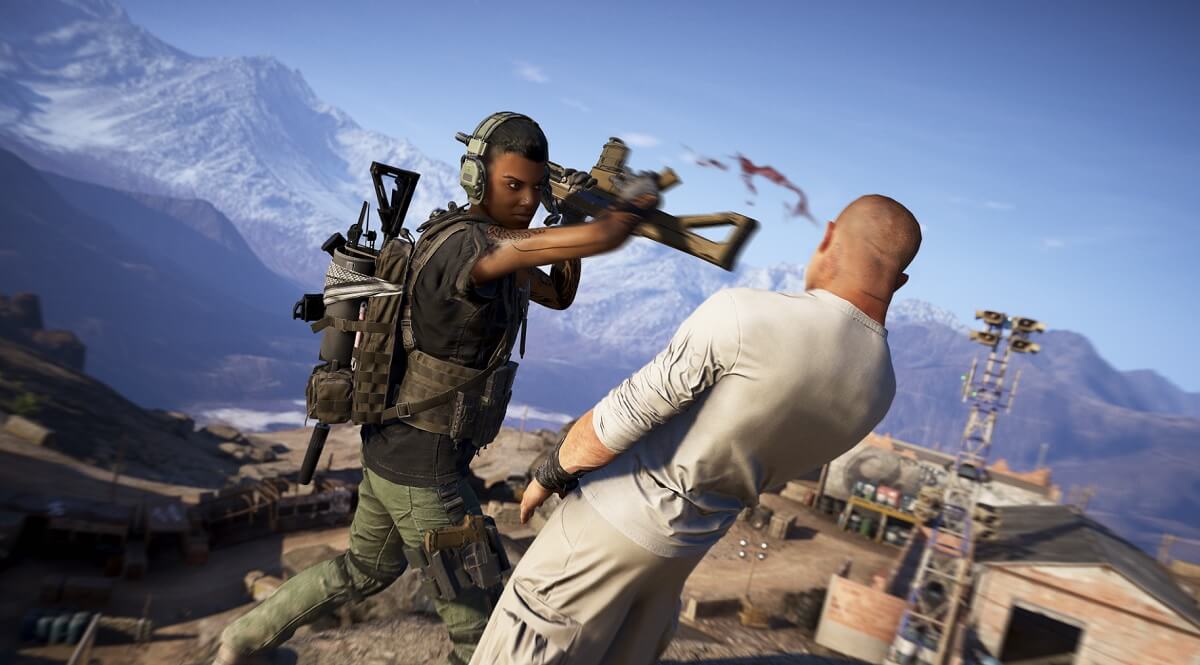 Abboud: There are two elements to that question. The big thing we tried to do is create something that isn’t player-centric, but that has its own life and its own agenda. You might have noticed that the guards can go to sleep because we have a day-night cycle. From that point of view, the way we make it intelligent is by giving the A.I. its own agenda.

When it comes to combat specifically, yes, depending on the level of difficulty you choose, you’ll change as far as how much damage you can take, but the A.I. will also be more or less acute, because the stronger you are in a game like this the more or less aggressively you can play. The way we approached it in development — the good thing is, we were able to progress step by step. If we had been working on this game with no experience of previous Ghost Recon games, it would have been hell. But we have lots of experience, and we were able to move that into the new playground.

For instance, you can look at how we approached the synchronized shot, which was in Future Soldier. We had lots of experience setting up synch shots in close environments there. When we worked on the A.I. for our open world here, we had the basics down, because we’d already worked for a couple of years on how to organize the A.I. so they shoot when you want them to shoot and deal with what’s going on in the world around them. It was a lot more work to do that in this big open world, but it was a natural evolution of what we’d done in the past.

GB: It’s always hard to make very single aspect of an open world believable. Do you think that’s something that we’ll still be working on years from now?

Abboud: It’s a race and we’re part of it. We took some time to do research about Bolivia, studying things like how the local people dressed, the music they listened to, that kind of thing. It’s a part of trying to be as realistic and authentic as possible. But on the other hand, this is still a game. There’s a limit to how much realism you want in a game like this, because it some point it runs up against making the gameplay fun. If we made everything perfectly realistic it would be boring.

Just look at something like the day-night cycle. That maybe seems like a simple system, but we spent a long time over years of development working on that and changing it a lot. We’re still tweaking it. If you wanted to infiltrate a camp in the dark and you had to wait six hours in front of your computer for the sun to go down, you wouldn’t be very happy. But if we make the cycle too fast, you’d notice a break in the realism. If the sun is constantly moving, that’s pretty weird. We need to find a balance between not too fast, for the sake of realism, and not too slow, to keep the game fun. 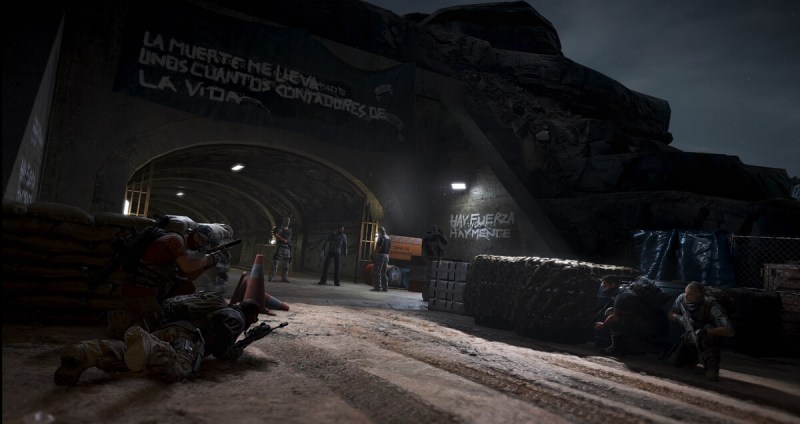 Above: Your missions take you into underground compounds in Ghost Recon Wildlands.

If you look at how the game industry has evolved, we’re getting close to a moment where the question is no longer, “How do we make it realistic?” We can make something very realistic if we want to. The question is, “How do we make sure people have fun?” It’s very important to keep all the elements of our game working together — the military aspect, the open world, and the co-op play. Separating out any of that would have led to a very different game. With everything we build, we want to make sure those three elements are present and working together.

Because of the four-player co-op, we have the possibility that the characters were all split up. Years ago, if you wanted to make a game where the players could take off for opposite corners of the map, that wouldn’t be possible. You couldn’t stream the different parts of the level at the same time. You’d have no way to make sure the logic of the world stayed the same when they were together. Because of the technology we have now we’re able to do this. But then that changes the way we look at the size of the world.

When we were building our prototypes and making new iterations, pretty quickly we realized that we needed to have something big enough so that the freedom of splitting up was worth having. When we’re balancing the challenge of different combat situations, we need to make sure that there aren’t so many things interacting with you that you couldn’t use stealth effectively. It’s always a balance, pursuing authenticity and realism. At the end of the day we’re making games that we want to have fun with.

GB: I noticed that the helicopters fly a little more like the real thing. It’s not as much like driving a car as in other games. It seems like you chose to make flight more challenging.

Abboud: The helicopters are a very important element, both for the theme of playing as elite soldiers and for aspects of gameplay. We were talking about how to make sure travel doesn’t get too boring. Helicopters are a lot faster than the other tools you have for traveling, so we needed to make sure they still presented the right level of challenge. That’s why we built them that way. We made a lot of decisions as far as how we wanted it to feel so it made sense in terms of gameplay. 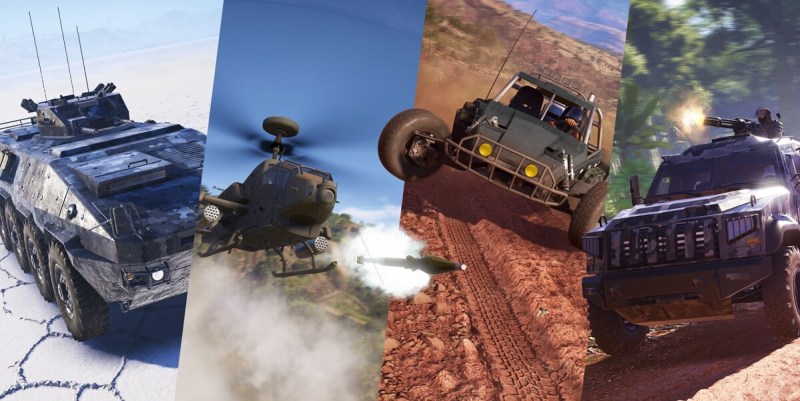 Above: You can ride in lots of vehicles in Ghost Recon Wildlands.

GB: You have to train a little bit more to fly it skillfully.

Abboud: Exactly. We expect people to spend a lot of hours inside this game, so there’s going to be a learning curve. What’s important is that you can still have fun early on in that curve. One of the great things about this game is that failure can still be fun. Let’s say you’re playing with three other people who you don’t know and who have different approaches. You can have fun succeeding with a perfect plan, but it can also be a lot of fun falling into unexpected situations.

That’s an important part of everything we build. We need to make sure that the time you invest in it is fun initially, when you’re learning the game, and also later on, when you’ve mastered more of it. And it can’t just be about increasing difficulty. You need to be able to find new things. Because of the quantity of stuff, the quantity of systems in this game, we’re still sometimes learning new things ourselves. We tweak one little thing in the A.I. and suddenly you can use it in some new way. We spend a lot of time just looking at the game, how it behaves, and trying to understand it.

A few years ago, when we were thinking about a mission, we might decide to put a particular vehicle in a particular place so you could start the mission, find that vehicle, drive from point A to point B, and end up right where you needed to be to succeed in the mission. Now that we have this fully open structure, though, you can take the vehicle you picked up in mission 27 and use it in mission 45. Because of the number of possibilities in the order of the missions, we can’t build this game thinking that a certain element will be absolutely necessary for a certain mission. We’re forced to see how all these different things can interact, as opposed to thinking about a mission as something scripted and linear. Very early on we said we didn’t want anything scripted in the game, and right now we’ve delivered on that. It’s just about the systems interacting together.