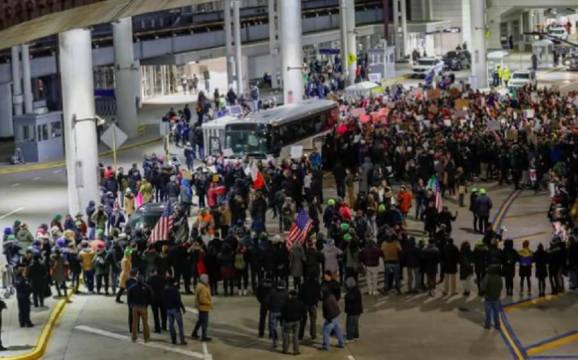 Protesters against Trump's Muslim ban at O'Hare airport in Chicago.

Leaders, such as Google cofounder Sergey Brin, are protesting at American airports, where the bans are being enforced. And game developers are joining in the fray as well. And, in an emergency stay issued on Saturday night, a federal judge blocked part of Trump’s executive order, ordering that refugees and others trapped at airports across the U.S. should not be sent back to their home countries.

We’ve listed some of the tweets below and will add to the list.

GDC is a global community – we’re horrified by the #MuslimBan. Of course we’ll refund affected attendees, and keep fighting for inclusivity.

Rami Ismael, cofounder of Vlambeer and a Muslim resident of the Netherlands, tweeted:

For the next 24 hours, all @Vlambeer revenue will be donated to @ACLU for their opposition to the #MuslimBan.

Brianna Wu, who is running as a Democrat for Congress, tweeted:

I will be there at Copley tomorrow, protesting this.

“As an immigrant and as a CEO, I’ve both experienced and seen the positive impact that immigration has on our company, for the country, and for the world. We will continue to advocate on this important topic,” Nadella said.

Paul Murphy, CEO of Dots, the maker of the popular Dots games, tweeted:

@dots is taking a stand. We are showing this to all of our players. 3-4 million people will see this soon #MuslimBan (thx @karaswisher) pic.twitter.com/5qwrVkuNF1

Kristian Segerstrale, CEO of Super Evil Megacorp, sent an email to all employees and posted on Medium about his views on the ban.

“Whatever your political affiliation or beliefs, discrimination or persecution of individuals on the basis of religion, ethnicity, national origin or anything else for that matter is simply not OK anywhere, ever,” Segerstrale wrote.

Margaret Wallace, CEO of Playmatics, said in an email to GamesBeat, “The more Trump tries to stifle liberty and democracy, the stronger we become. We are a nation of immigrants. Steve [Jobs’s] biological father was a Syrian immigrant. My grandfather was an immigrant. Trump sells a lie of a past America that never was. He preys on fear. We in the tech community must be strong and show leadership in our industry as citizens united in defense of democracy.”

Joseph Staten, one of the co-creators of Halo, tweeted:

Today, even more than usual, I’m proud to be a contributor to the @ACLU. And I’m proud to work for a company willing to take a stand. https://t.co/HFqmMDicCA

Jamil Moledina, a game leader for Google Play and Daydream at Google, tweeted:

It’s painful to see the impact of this executive order, my hope is that the real America stands up and rejects Trump https://t.co/tBHM7KJVok

On Facebook, Moledina expanded his comment, “It’s painful to see the impact of this executive order on everyone affected by it. This isn’t the America I admired from abroad, and made my home. And I have to believe that’s true of most Americans born with citizenship. My hope is that the real America stands up and rejects Trump and his thinking.”

Kate Edwards, executive director of the International Game Developers Association (IGDA), said in a statement, “Since the organization was incorporated in the U.S., the IGDA serves as the peer advisory organization to the United States Citizenship and Immigration Services (USCIS), meaning that when a U.S.-based company is seeking to hire external skills to work in the US, the IGDA provides an advisory opinion on the person’s qualifications in game development and encourages their employment in the U.S. Since becoming the Executive Director in late 2012, I have signed over 250 such letters for individuals from all over the world, including from what are identified as ‘Muslim nations.’ We embrace the fact that the passion and skill for game development knows no boundaries — political, geographic, cultural, or demographic. Thus to restrict immigration on the basis of an individual’s state of origin represents an ignorant knee-jerk that assumes only the worst and wrongly stereotypes the people of an entire culture. We stand in absolute opposition to any policy in any government that would seek to unduly restrict an individual’s ability to pursue their creative passion and chosen career path in game development.”

Tracey Thompson, spokeswoman for Bethesda Softworks, said, “We are a global company with employees of every race, gender, ethnicity, religion, and sexual orientation. As such, we will always support diversity and acceptance over division and exclusion.”

Raph Koster, veteran game developer, said, “If you fear Muslims: helping others even at risk to yourself is termed “heroism,” and fearing all in a group is called “pre-judging,” aka “prejudice.” This word is not used lightly: these actions are evil, by the dictionary definition. Morally bankrupt. Cowardly. Shameful.”

Ilkka Panaanen, CEO of Supercell, said on Facebook, “To echo what [Kristian Segerstrale] says: discrimination on the basis of religion, ethnicity, national origin is simply NOT OK anywhere, EVER.”

Many of you have likely been following the recent news on the U.S. Presidential executive order on immigration, and the global reaction that has followed. Our management team has also been closely monitoring this situation as it continues to unfold in real time. As a foreign national who has spent my career working all around the world, and am now proud to be living here in America with my family, I wanted to share some perspective.

We reject actions that diminish our principles of diversity and inclusion that are central to our company.  Immigration has shaped the organization we are today, and, for many of us, it is a central part of our own lives or those of our families and friends. The value of teamwork underlies everything we do here – it shapes who we are and how we operate. So now, more than ever, as One Team we are here to support our people. Specifically:

Our open, inclusive, and multicultural company reflects our ideals in every way. The same can be said for our amazing games that connect our players all around the world. The circumstances we face today will not diminish the strength of our values or our team.

Frank Gibeau, CEO of Zynga, sent this email off to employees:

I’ve heard from many of you that you’re concerned about what you’re reading and hearing related to the President of the United States’ Executive Order restricting immigration and travel from Iran, Iraq, Libya, Somalia, Sudan, Syria and Yemen.

I want to be clear that as a company we are firmly opposed to these actions. Zynga has always been – and will always be – an organization that values diversity and equality. We have a culture of inclusion and respect. No matter what your political affiliation is, this basic foundation of who we are and what we value should always unite us.

Our number one priority is to ensure the safety and civil liberties of our global employees, and I’ve been working closely with James and the People Ops, Legal and Security teams to provide support for individuals who are directly impacted. We are continuing to actively monitor further developments regarding the Order and how it is being applied so we can provide as many resources as we can to affected employees.

We’re a stronger organization because we have a worldwide community of employees from different backgrounds and experiences. We will continue to stay true to our commitment to all of our global teams to provide you with a workplace based on tolerance, support and compassion.

As always, if you have any questions or need support, please don’t hesitate to reach out to me or James and the People Ops team.