Israel is well-known for producing leading publicly-traded cybersecurity companies such as Checkpoint, CyberArk, and Varonis, but the ever-growing number of private Israeli companies in this field is staggering and has venture capitalists, CISOs, corporate development teams, and bankers shuttling to Israel on a monthly basis. Next week is CyberTechTLV, the largest cyber tech event outside of the US, and fittingly it is hosted in Tel Aviv.

Eighteen months ago our firm mapped 120 Israeli cybersecurity startups to serve as an internal guide for ourselves and as a public resource for visitors to the Israeli cyber security scene. Today, the landscape has grown to encompass 150 companies, including 40 new startups. We divide these companies into 16 distinct categories, with two new categories: “deception” and “software development life cycle.”

While there is some minor overlap among categories, and some companies that could find a home in more than one category, we hope this landscape can continue to serve as a useful guide to professionals who closely follow the cybersecurity innovation coming out of Israel. 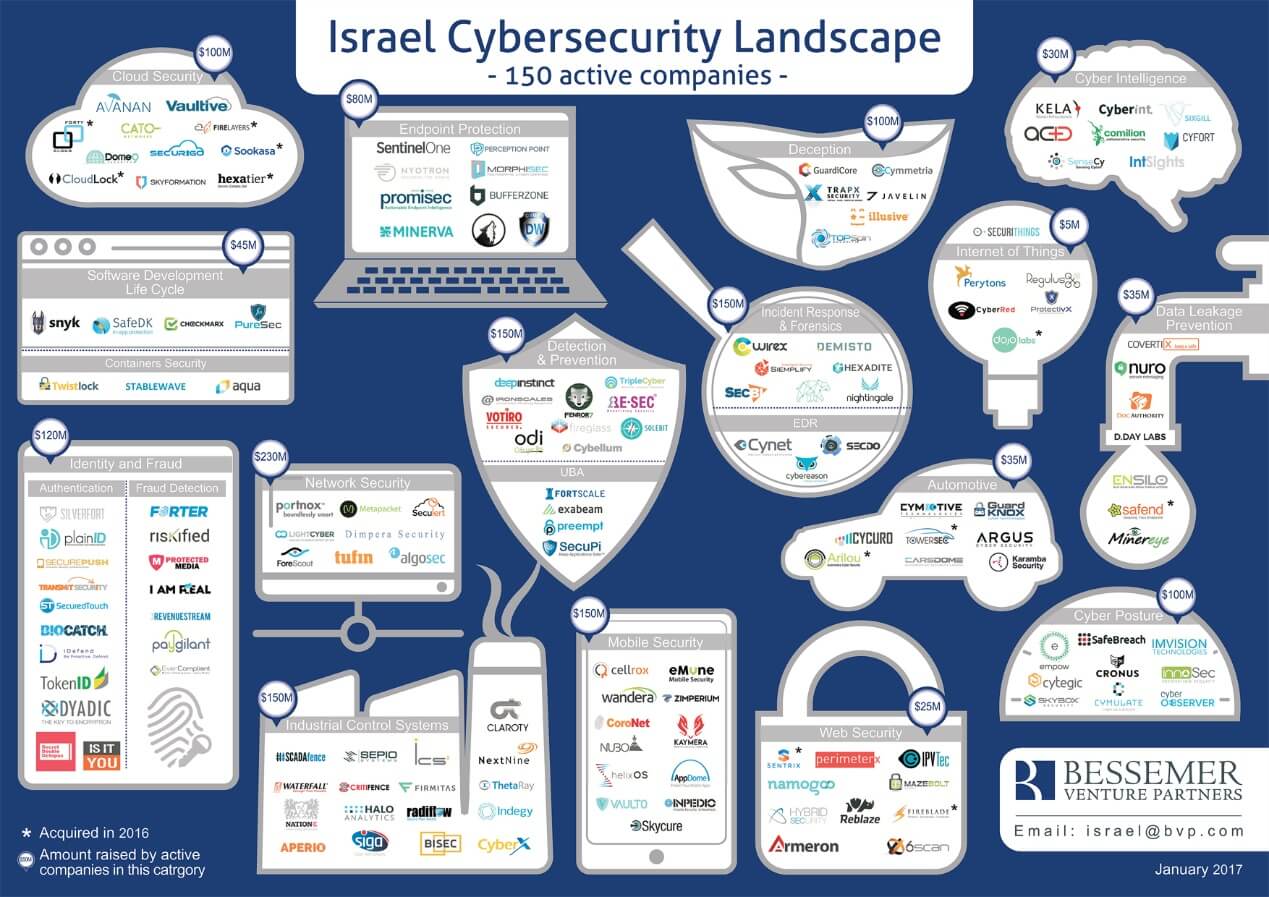 Looking at the last couple of years in the Israeli cybersecurity industry, the most obvious takeaway is that the amount of capital invested in Israeli cyber tech has doubled from $294 million in 2014 to $606 million in 2016. Some of this surge can be attributed to the activities of the new cyber foundry, Team8 — which raised about $80 million last year for its portfolio of startups — as well as larger follow-on venture financings across the board.

The second most intriguing finding was the dearth of cybersecurity M&A in 2016, which at $490 million actually represents the worst year since the category began to attract attention. We believe this is not due to a lack of interest on the part of acquirers but rather to a reluctance on the part of sellers given their easy access to growth capital. Specifically, there was only one exit larger than $100 million in 2016 (Cloudlock). 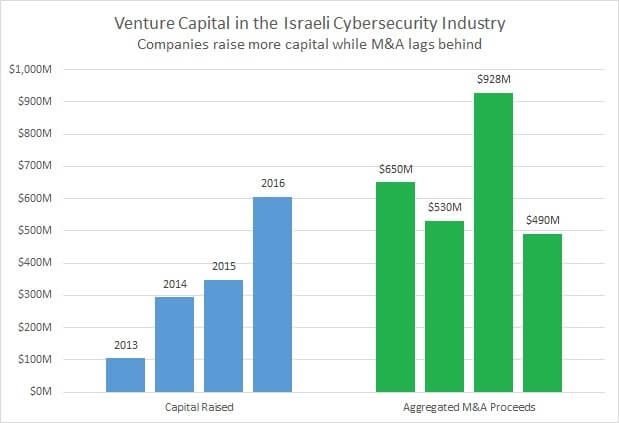 A third distinct trend is the increased number of large growth rounds in the Israeli cybersecurity industry. Whereas rounds greater than $20 million were scarce to nonexistent in the past, there were seven such rounds in 2015 and 10 in 2016, including the $80 million mega-rounds of companies like ForeScout and Cybereason. Companies raising such large rounds have presumably decided to forgo a near-term exit in order to focus on growth.

The increased number of growth rounds lifted the average round size in Israeli cybertech to an all-time high of $13.8 million in 2016. However, irrespective of these growth rounds, the data clearly show that the average size of early stage rounds has increased as well. 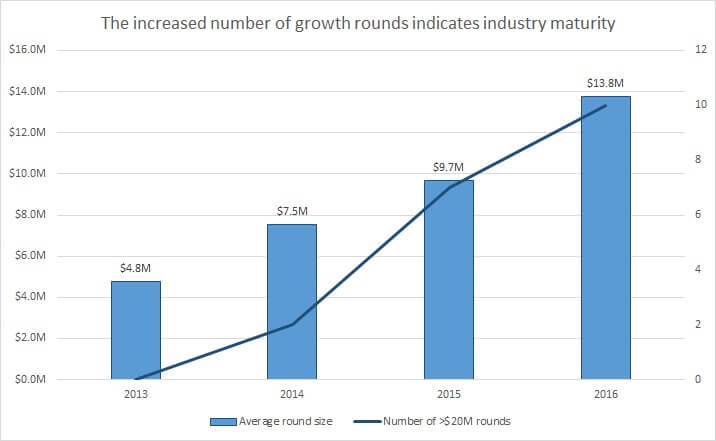 The landscape shows a high concentration of startup activity in each category, suggesting excessive local competition and presumably some level of overfunding. However, based on the large financing rounds that took place this past year, category leaders are beginning to emerge and separate from the rest of the pack. Such is the case with the Industrial Control Systems category (17 companies), where ClarotyOT and Indegy seem to be pulling away from the rest. In other categories, such as automotive security, it looks like early M&A activity has weakened the remaining independent startups, which now have fewer potential acquirers.

As the local sector concludes its hype stage, we anticipate a slight decline in growth financing and a modest rebound in M&A activity for 2017. It only takes a couple of large acquisitions to change the trajectory, and cyber security remains a real problem and opportunity. We also expect a decline in company formation in response to investor fatigue and overexposure. At the same time, we will continue to the see the emergence of category winners in segments such as mobile security, deception, and ICS, which were nonexistent categories only a few years ago. Some things we can’t predict with much accuracy, but one thing we can be certain of is that Israeli cybertech innovation will continue to have an outsized impact on the global market.

Tomer Diari is an associate based in Bessemer Venture Partners’s Israel office, where he focuses on opportunities in Israel and Europe, investing at every stage and across industries.