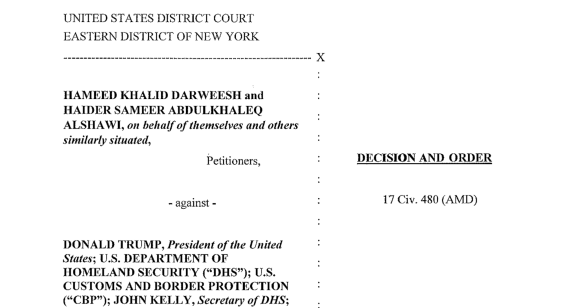 Perhaps the tech industry is at last finding its voice — or not.

President Donald Trump’s Executive Order on Friday preventing travelers and immigrants from certain predominantly Muslim countries from entering the United States prompted strong reactions from the ACLU and many groups across America. Yesterday, a federal judge issued a stay blocking the Executive Order. The judge concluded, “There is imminent danger that, absent the stay of removal, there will be substantial and irreparable injury to refugees, visa-holders, and other individuals from nations subject to the January 27, 2017 Executive Order.”

The tech industry’s response to this? Not much.

None of these statements represented a swift and powerful condemnation of the Executive Order itself.

President Trump’s economic advisory group is scheduled to meet this Friday. Members include Tesla CEO Elon Musk and IBM CEO Ginni Rometty, who would have the opportunity to more vigorously press the case against Trump’s Executive Order — if they can find their voice.

Amazon employees received a human resources memo alerting them to the travel restrictions. “Our immediate focus is to make sure you all have the information you need to make travel decisions in the coming days and weeks,” stated the message from the VP of human resources Beth Galetti, according to The Verge. “Here’s what you need to do now if you are a citizen of any of the countries listed in the order…”

Apple CEO Tim Cook addressed the issue by sending an email to Apple employees on Saturday. “I’ve heard from many of you who are deeply concerned about the Executive Order issued yesterday restricting immigration from seven Muslim-majority countries,” Cook wrote in the memo, according to BuzzFeed. “I share your concerns. It is not a policy we support.”

On Friday, as VentureBeat reported, CEO Mark Zuckerberg issued one of the strongest public statements. Zuck wrote a critical post on his Facebook page: ““We are a nation of immigrants, and we all benefit when the best and brightest from around the world can live, work and contribute here.”

After President Trump signed the Executive Order, CEO Sundar Pichai circulated an internal memo that, among other things, recalled from overseas to the United States more than 100 employees. “It’s painful to see the personal cost of this Executive Order on our colleagues,” Pichai wrote in the memo, according to Bloomberg. “We’ve always made our view on immigration issues known publicly and will continue to do so.”

On Saturday, CEO Satya Nadella republished on LinkedIn an internal memo from counsel Brad Smith that recited several values and a belief “in broader immigration opportunities, like the protections for talented and law-abiding young people under the Deferred Access for Childhood Arrivals (DACA) Program, often called ‘Dreamers’.”

With words as empty as Amazon’s travel advice, Nadella added, “As an immigrant and as a CEO, I’ve both experienced and seen the positive impact that immigration has on our company, for the country, and for the world. We will continue to advocate on this important topic.”

CEO Reed Hastings took to Facebook to express his dismay: “Trump’s actions are hurting Netflix employees around the world, and are so un-American it pains us all. Worse, these actions will make America less safe (through hatred and loss of allies) rather than more safe. A very sad week, and more to come with the lives of over 600,000 Dreamers here in a America under imminent threat. It is time to link arms together to protect American values of freedom and opportunity.”

CEO Jack Dorsey took to his favorite platform (and that of @realDonaldTrump) on Saturday, posting a tweet: “The Executive Order’s humanitarian and economic impact is real and upsetting. We benefit from what refugees and immigrants bring to the U.S.” VentureBeat reported Saturday on the choices faced by Twitter in response to Trump’s ban on Muslims.

CEO Travis Kalanick published on Facebook an email he sent to Uber employees on Saturday. Kalanick expressed concern for Uber drivers affected by the Executive Order: “We are working out a process to identify these drivers and compensate them pro bono during the next three months to help mitigate some of the financial stress and complications with supporting their families and putting food on the table. We will have more details on this in the coming days.”