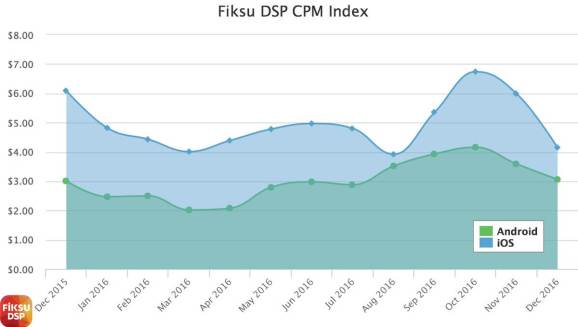 The cost of acquiring new users on mobile fell in November and December 2016.

The cost of acquiring a new mobile game or app users fell in November and December, according to mobile marketing firm Fiksu DSP.

The December index published today confirmed the trend, which gave marketers a rare respite in the ever-increasing cost of getting users to try out new apps. The CPM (cost per 1,000 users) is at $3.06 on Android, down from a peak above $4 in October. On iOS, the CPM was $4.15, down from a peak near $7 in October. Fiksu DSP said the trends showed how marketers poured a lot of money into the launch of the iPhone 7 in October.

Fiksu said the market continues to mature in real-time bidding, or automated marketing campaigns, with advertisers shifting their spending throughout the year rather than concentrating it in the holidays. The the numbers show that new device releases, such as the iPhone 7, are primed to make more of an impact than the traditional seasonal ad buying cycles moving forward.

In December, media costs declined across both iOS and Android, running contrary to the seasonal fluctuations that mobile marketers have grown to expect. On iOS, cost per purchaser (CPP) was down 23 percent and CPM fell 31 percent from November.

CPP is the average cost to get a user to make a purchase (or another high-value action, like a registration, depending on what a brand has tagged as its key metric). Because exact dollar values vary, the indices were set to a baseline value of 100 for June of 2015 and adjusted proportionally to reflect changes over time.

“Marketers are increasingly using this tactic of more evenly distributing spend over the year rather than fluctuating as much month-to-month, which has resulted in the flattening in holiday mobile competition,” said Tom Cummings, vice president at Fiksu DSP, in a statement. “Looking at 2016, it’s clear marketers are now recognizing the consistent, year-round value of mobile targeting. We’re also seeing more brands run more diversified campaigns, rather than being hyper-focused on one metric like installs.”

The launch of the iPhone 7 made more of an impact on ad spend than the holidays.

“The fall in CPP and CPM this month suggests that iPhone launches provide one of the most impactful opportunities for iOS marketers to maximize return on mobile ad spend, even more so than the holiday season,” said Cummings. 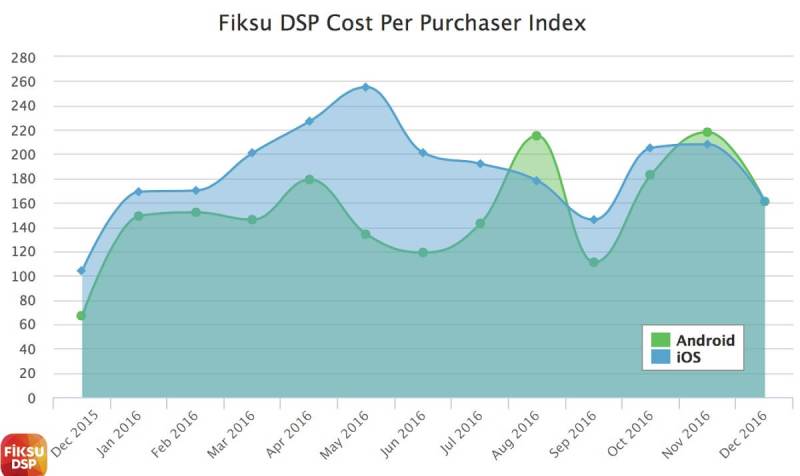 Above: Cost per purchaser fell in November and December 2016.