There have been columns at length about how President Trump’s executive action on seven Muslim-majority countries has impacted international relations and geopolitics at the macro scale. With many tech companies giving guidance to employees of different nationalities and tech leaders going on record as saying this is an enormous moral and logistical problem, there hasn’t been a clear sense of the magnitude of disruption this recent executive action has had on one of the fastest-growing and most prosperous industry sectors in America.

Capturing an approximation of this effect would involve estimating the numbers of tech workers affected by this ban in technology.

I started by researching all seven nationalities affected by the ban, but it became apparent that U.S. tech is benefitting significantly more from people trained in Iran than from those trained in the other six countries, so I’ve focused my attention there. By researching on LinkedIn and compiling a list of the Iranian universities in the top 1,000 global universities (including standouts such as Sharif University of Technology) and where their alumni work (both in terms of company and geographic location), I found that there are roughly 924 graduates of Iranian universities currently employed by 12 of the largest U.S. technology companies by market capitalization. 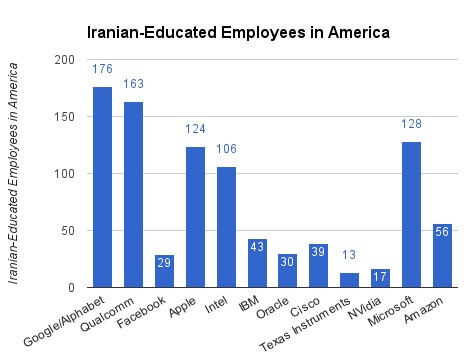 Given that there have been zero terror-related fatalities committed by refugees in the United States since the 1980s and, as the Cato Institute has pointed out, the chances of being killed by a permanent legal resident are about 1 in 1.3 billion and that, in fact, no foreign nationals from Iran have been implicated in a terror attack on U.S. soil, the cost/benefit curve quickly becomes clear.

To put it starkly, there are hundreds if not thousands of nationals from different countries building their lives in America, creating technology that benefits everybody, and paying taxes while contributing to the prosperity of America.

If there has been a silver lining to this whole situation, it is the constant reminder from the stories of those denied entry and those threatened that immigrants make America great.

Roger Huang is a migrant from Canada who has settled in San Francisco. He helps people around the world get high-skills digital jobs with Springboard, and in his off-time he writes technical tutorials, dances salsa, and enjoys tofu poke bowls.