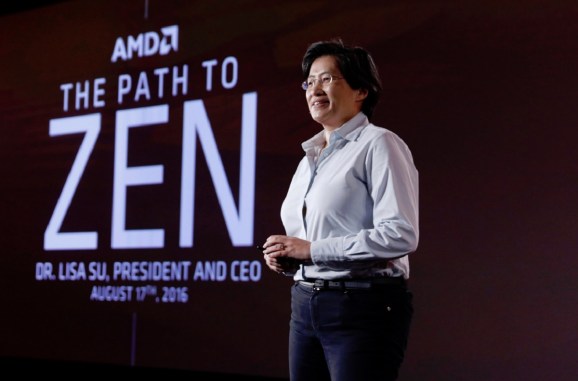 AMD is the No. 2 maker of PC processors and graphics chips behind Intel, and its results are a bellwether for the PC industry. The company is readying its Ryzen desktop processors for launch in the first quarter. These chips have a chance to take the performance crown away from Intel for the first time in a decade.

Analysts expected earnings per share to be a loss of 2 cents per share on revenue of $1.07 billion. AMD reported a loss of 1 cent a share on revenue of $1.11 billion on an adjusted basis. AMD credited higher graphics chip sales for the revenue growth, which was up 15 percent from a year ago. Revenue was down 15 percent from the prior quarter, largely due to slower seasonal sales of semi-custom chips (which means chips for video game consoles).

“We met our strategic objectives in 2016, successfully executing our product roadmaps, regaining share in key markets, strengthening our financial foundation, and delivering annual revenue growth,” said Lisa Su, AMD president and CEO, in a statement. “As we enter 2017, we are well positioned and on-track to deliver our strongest set of high-performance computing and graphics products in more than a decade.”